Apple Invents a Virtual Ruler Tool for Future iWork Apps like Keynote, Pages, Numbers and Beyond

Before Apple's iPhone-7 event in September there was a little hope that we could see Apple introduce the ability to use the Apple Pencil with iPhone. Tim Cook was on record saying "And if you've ever seen what can be created with that pencil on an iPad or an iPhone, it's really unbelievable." Apple certainly has the patents supporting such a development and this week we got another look at what could be coming to the iPhone in regards to the use of Apple Pencil.

Back in May, Microsoft introduced the Virtual Ruler for their Surface Tablet. You could see it in action in the video below at the 5.44 minute mark and again at the 9:07 minute mark in connection with aligning graphic elements in PowerPoint.

This kind of drawing tool is coming to the iPhone and iPad. Apple's patent titled "Device, Method, and Graphical User Interface for Providing and Interacting with a Virtual Drawing Aid" shows us that the virtual drawing Aid is in fact a virtual ruler.

Apple notes in their patent background that computer-programs that provide virtual design and drawing tools have wide applicability in both industrial and personal use settings. Some applications provide free-hand sketching capabilities that allow a user to draw lines and objects based on free-hand movement of a contact (e.g., a contact made by a finger or stylus) on a touch-sensitive surface (e.g., a trackpad or touch-screen display). In addition to selecting the color and texture for a drawing tool (e.g., pen, brush, pencil, etc.) used, a user may wish to employ certain conventional drawing aids, such as a straight-edge ruler, a template, a protractor, an angle ruler, etc. It is inconvenient and difficult to use a real-world drawing aid with a virtual drafting environment. Thus, providing virtual drawing aids in computer programs that provide sketching capabilities will improve the functionality of the computer programs. It is challenging to provide virtual drawing aids in a way that are functional, efficient, and ease to use.

In some embodiments, the device is a desktop computer.

In some embodiments, the device is portable (e.g., a notebook computer, tablet computer, or handheld device). 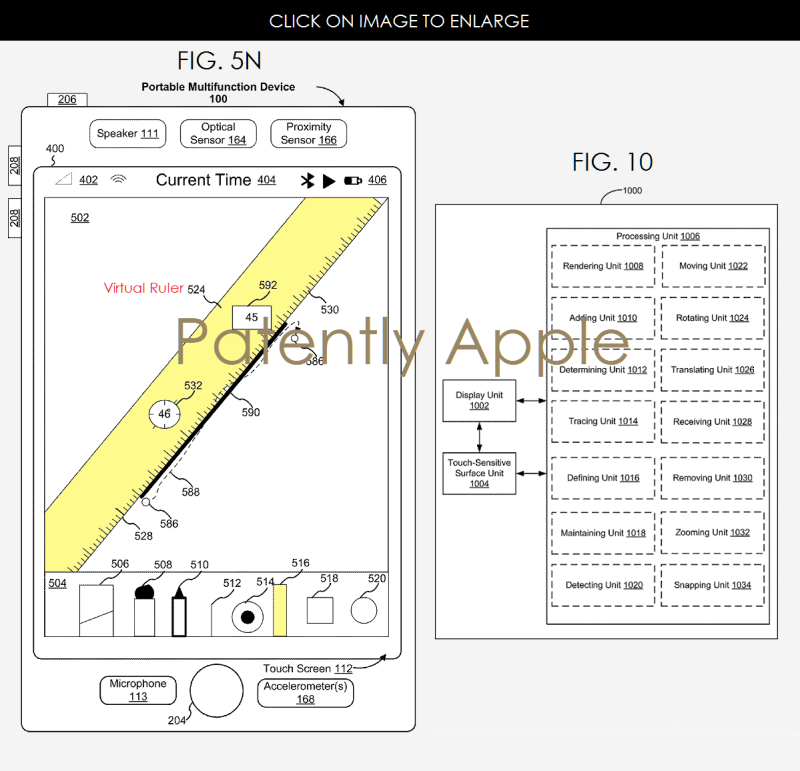 Apple's patent FIG. 5N above illustrates snapping of a line drawn against an edge of a virtual drawing aid (e.g., edge #528 of straight-edge ruler #524) to a nearest snap location in response to braking motion at the end of a line-drawing gesture that drew the line; FIG. 10 is an overview of the processing unit that controls virtual ruler to act as physical ruler.

Apple notes that the "tactile output generator(s) receive tactile feedback generation instructions from a haptic feedback module and generates tactile outputs on the device that are capable of being sensed by a user of the device. 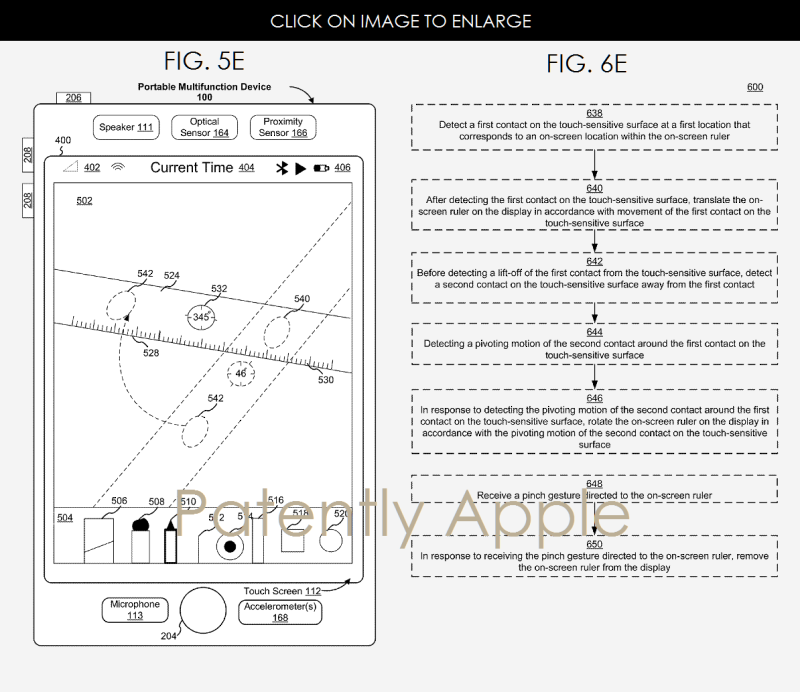