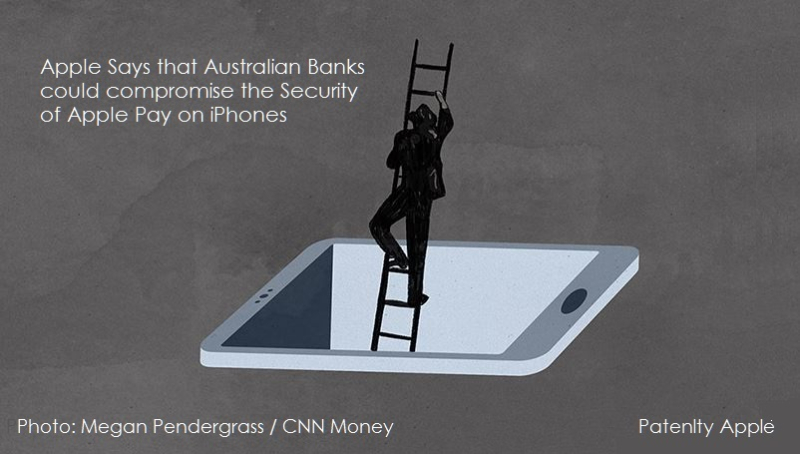 To say that Apple is having trouble getting Apple Pay off the ground successfully in Australia would be an understatement. Back in December 2015 it was reported that Apple was struggling to persuade Australia's big banks to sign up for its Apple Pay mobile payment system. The banks went to the Australian Commission to force Apple to open up their Apple Pay APIs so that they could have their own financial wallets on Apple's iPhone. This was all covered in our report titled "Apple Tells Australian Commission that Three Top Banks are in a Cartel to Dictate Terms for Apple Pay."

Under Australian law, bargaining cartels can be formed as long as they have permission from authorities, and the banks are seeking the ability to offer their own digital wallets in Apple iPhones - the first major challenge to Apple Pay of its kind.

The saga continued in October when with Fintech Australia interposed itself in the war between Apple and the nation's banks, arguing that the dispute highlights the need for open access in all areas of financial infrastructure." This was after the Korean Fintech industry filed a complaint with their Fair Trade Commission with the same argument.

We had reported back in September that South Korea's Financial Technology (Fintech) companies were "going ahead with an action against Apple which does not open its application programming interface (API) for near field communication (NFC) at the Korean Fair Trade Commission.

The Korean fintech firms claimed at the time that Apple's policy not to open its closed API is denying them NFC-based fintech business opportunities such as simple mobile payment, transportation cards and user identification. This issue will draw much attention as the Korean fintech companies are expected to lock horns with Apple, a global IT giant over opening the latter's API for NFC.

While all of this was happening, Australia's ANZ bank signed on with Apple Pay and those who want this service in Australia can have it if they switch to ANZ. Their ad is presented below. ANZ captured the country's tension surrounding Apple Pay in a hilarious way.

Today, the Australian banks didn't get good news. According to Reuters, Australia's antitrust regulator said on Tuesday it is likely to deny four local banks permission to collectively bargain with Apple Inc in relation to its mobile digital payments system.

But the preliminary decision was "finely balanced" and could be reversed if the banks make a convincing case before a final opinion is due in March, Australian Competition and Consumer Commission Chairman Rod Sims told Reuters.

Losing the case would be a setback to the banks' hopes of bypassing Apple's in-house payments system and rolling out their own iPhone versions free of competition from the Silicon Valley giant, which has the biggest smartphone market share in Australia.

Back in August, Foad Fadaghi, managing director of technology research firm Telsyte told Reuters that "The banks here feel like they've done the hard work in bringing contactless payments already to Australia and Apple is just going to come in...and eat their lunch."

On the flip side however, Apple is the first technology company to have figured out how to create a digital wallet that consumers feel safe enough to use. Apple made it easy to set up. All previous digital wallet efforts failed. So now the Australian banks just want to now scoop in and just demand that Apple offer their digital wallets on the iPhone to bypass Apple Pay. It's as arrogant as it gets.

Why aren't the Australian banks simply bypassing the iPhone and choosing to put their digital wallets on Android phones bypassing Google Pay or Samsung Pay? Are they having any luck on those Android phones? Or is it that the majority of the bank's customers have iPhones and that it's them that are demanding that they offer Apple Pay service with their bank cards?

Unless Australia is becoming a communist state I'm a little baffled that the banks simply refuse to deal with Apple rationally like U.S. and Canadian banks have done. This holy position of theirs is the laughing stock of the world. Here's to hoping that ANZ continues to win customers from these stubborn banks and takes them to the cleaners. It's called capitalism and two thumbs up for ANZ.