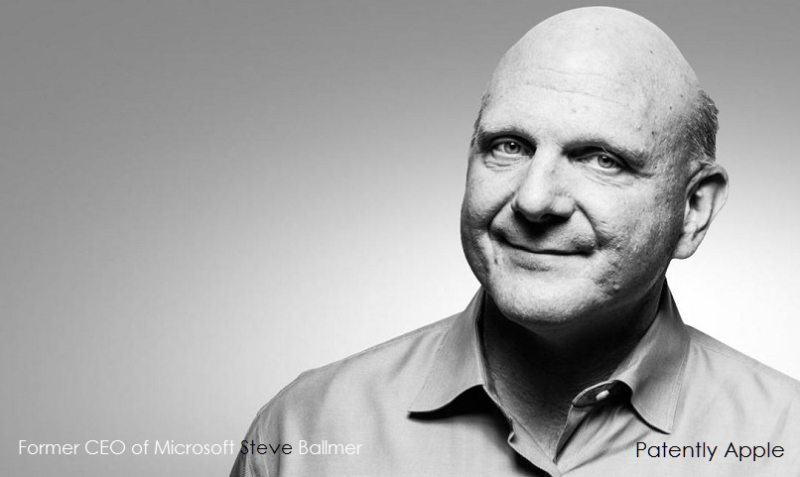 Back in 2014 Patently Apple posted a report titled "Steve Ballmer Laughs no more at Apple's iPhone Revolution," that really struck a nerve as we looked back to 2007 when conceited Ballmer laughed and belittled Apple for entering the smartphone market. Ballmer stated that there was no chance that the iPhone was going to get any significant market share. No chance. It's a $500 subsidized item. They may make a lot of money. But if you actually take a look at the 1.3 billion phones that get sold, I'd prefer to have our software in 60% or 70% or 80% of them, than I would to have 2% or 3%, which is what Apple might get." I don't think that there's a moment in time that so defines a CEO being out of touch with the heartbeat of the market than that. Just yesterday we learned that Apple sucked the air out of the room when it came to smartphone industry profits in Q3, even though volume-wise they only held 12% of the smartphone market; So much for Ballmer's brilliance even years after his departure from Microsoft.

In 2014, speaking at a Business School in Oxford, U.K., Steve Ballmer admitted that he would re-do the last ten years if he could. We would have a stronger position in the phone market today if I could re-do the last 10 years," he said. The answer, he said, is to pick up and try to catch the next wave."

To this very day, Apple's fast lane change in 2007 still haunts Steve Ballmer who told Bloomberg that his missteps with the smartphone revolution strained his relationship with Bill Gates.

Steve Ballmer told Bloomberg today that his decision to push Microsoft Corp. into the hardware business contributed to the breakdown of his relationship with long-time friend and company co-founder Bill Gates. Ballmer's only regret: not doing it sooner.

"There was a fundamental disagreement about how important it was to be in the hardware business," Ballmer said. "I had pushed Surface. The board had been a little reluctant in supporting it. And then things came to a climax around what to do about the phone business."

Ballmer said the mistake was getting into handsets and tablets too late.

"I would have moved into the hardware business faster and recognized that what we had in the PC, where there was a separation of chips, systems and software, wasn't largely gonna reproduce itself in the mobile world," he said. For more on this read the full Bloomberg report here.

At the end of the day, Ballmer contradicts himself and tries to rewrite history. In the 2007 interview that we quoted at the top of the report, he was clearly boasting about how smart Microsoft was having 60, 70, 80% of the software for phones compared to Apple's lowly 2 or 3% of smartphone hardware.

Now we're to magically believe that he saw the light about getting into hardware at that time. No, no, no you didn't, Mr. Ballmer. You simply forgot what we remember exactly what you said back then, and your revision of history shows us the depth of how this still haunts you to this day; how Steve Jobs and Apple out-smarted you and left your company in the dust.