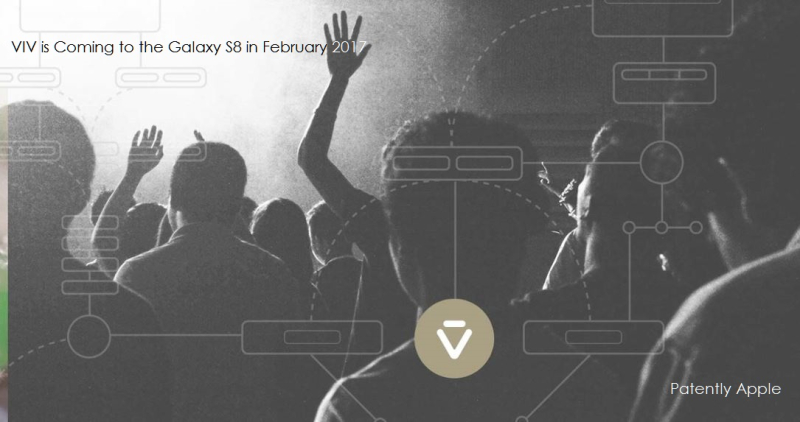 Last month Patently Apple pointed to a few potential smartphone features reportedly coming to Samsung's Galaxy 8 in late February 2017. We're likely to see Samsung introduce dual cameras, drop their Home button and power it with a new 10nm processor. Samsung is also likely to introduce the Note7's Iris scanner feature in the Galaxy S8. So what else could Samsung be introducing in February to get their S8 more in tune with Apple's iPhone? The answer is definitely going to be Artificial Intelligence. Yes, AI is going to be the big star feature for their new Galaxy S8 according to two Korean tech reports today. In fact their new AI is from the creators of Siri who broke away to create a startup called Viv which was acquired by Samsung last month.

The Korean reports note that Samsung Electronics' upcoming flagship handset, the Galaxy S8, will be equipped with artificial intelligence (AI) functions, paving the way for a powerful new paradigm shift in the smartphone industry, the company said Friday.

"The S8 will become our first smartphone with AI agent technology," Samsung Electronics Vice President Rhee In-jong said in a press conference, Friday. "This will be our first step in achieving our vision of connecting the devices in an intelligent way, making people's lives more convenient."

AI agent technology refers to a kind of software application that can automatically execute tasks manually instructed by its user. Earlier last month, Samsung Electronics acquired Viv Labs, a U.S.-based AI firm, in its bid to establish what it calls an AI-centered open ecosystem by taking advantage of the latter's expertise in natural language understanding and machine learning technology.

Samsung Electronics said its ultimate goal is to establish an open AI platform where Internet of Things (IoT) devices can be interconnected via voice control.

"The new AI functions of the S8 are not about its services, but the beginning of our vision," the Samsung executive said. "We are going to expand its presence into other devices ― including televisions, refrigerators and washing machines. Users will not have to operate any apps in the upcoming era, as the open AI ecosystem will allow agents to do tasks on their own."

But the company declined to comment further on specific AI characteristics of the new smartphone.

Viv Labs CEO Dag Kittlaus also expressed confidence over the potential synergy its speech recognition technology will generate with Samsung. "Speech recognition is approaching 95 percent accuracy, and it's rapidly approaching the level where people can interact with more and more things," he said. "We have big plans with Samsung, and this is the beginning of a long-term relationship with very big AI ambitions."

Some thought that Apple would have acquired Viv to ensure that some of their competitors couldn't offer Siri-like services. Apple's one-time lead in AI may have evaporated in the blink of an eye with Samsung implementing Viv so quickly into their next smartphone.

While it's bound to be a little rough around the edges on day one, the fact is that Samsung has now quickly caught up to Apple's Siri and with their appliances business, they'll be aiming to roll Viv into their Internet of Things platform that will extend through to their Smart TV interface, their Gear watch and VR headset product lines within a very short period of time.

Between their Note7 crisis and the recent recall of their washing machines due to explosions, Samsung needs to push the Galaxy S8 to its limits to help them turn the page and get them back on track with competitive products.

Then again, we all know now that pushing their Note7 out the door to beat the iPhone 7 to market was a disastrous move. While it's true that Samsung certainly needs a really hot product right now, it's up to their engineering teams to understand that doesn't mean adding fireworks.