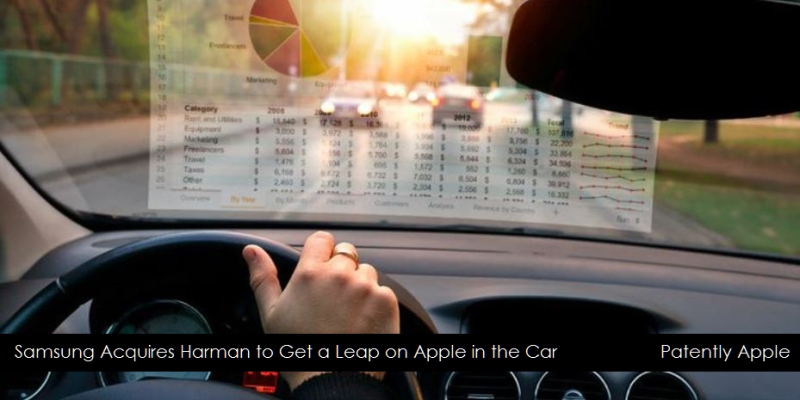 Late last month Patently Apple posted a report titled "Apple's Canadian Office is Focused on Developing carOS." The report noted that Kanata research and development center near Ottawa has a major presence in the automotive software sector. Kanata Research Park is already home to BlackBerry's automotive division, QNX Software Systems, which recently unveiled a slate of new software for the rapidly evolving driverless car market and signed a deal with Ford on October 31. Apple didn't acquire QNX when they could have but are now actively hiring away many of their engineers to advance Apple's future carOS. Samsung now wants in on the action and unlike Apple, are upfront and have aggressively acquired Harman today.

Samsung has tried to beat Apple on hardware alone and that hasn't been overly successful over the years, especially when Apple took away their single phablet advantage with the iPhone 6 Plus. So Samsung is now doubling down and refocusing on software to catch up with Apple and hopefully pull ahead of them at some point in time.

Samsung acquired Viv, the engineers behind Apple's Siri and will aggressively bring AI to their new Galaxy S8 that is scheduled to debut in late February. Now Samsung wants to get in Apple's face again by acquiring Harman International for $8 billion. Harman will instantly give Samsung a CarPlay like presence, especially with European car OEMs, and allow them to compete head on with Apple's Beats for high-end headphones and earbuds while allowing them to leapfrog Apple into audio systems for vehicles and much more.

Samsung's acquisition will also put them on the same footing or ahead of Apple in Autonomous driver technology. Dinesh Paliwal, HARMAN Chairman, President and CEO, stated today that "Combining Samsung's strengths in leading-edge displays, connectivity and processing solutions with HARMAN's technology leadership and long-standing customer relationships will enable OEMs to provide new offerings for their customers. Partnerships and scale are essential to winning over the long term in automotive as demand for robust connected car and autonomous driving solutions increases at a rapid pace. This transaction will bring HARMAN and Samsung's complementary strengths together to accelerate innovation in this space."

Samsung expects the combination to deliver significant growth opportunities and benefits to customers by leveraging Samsung's and HARMAN's complementary technologies, resulting in increased market penetration across important end markets such as the ones listed below:

• Automotive: Combining HARMAN's leadership in new connected car technologies, including its top positions in infotainment, cyber security, over-the-air updates and telematics, with Samsung's significant expertise and experience in connectivity technologies, including 5G, UX/UI, display technology and security solutions, will enhance HARMAN's automotive and connected services businesses to drive greater sales and provide significant benefits as automakers speed the adoption of next-generation connected cars. Some of Harmon's partners in this area include those listed below. 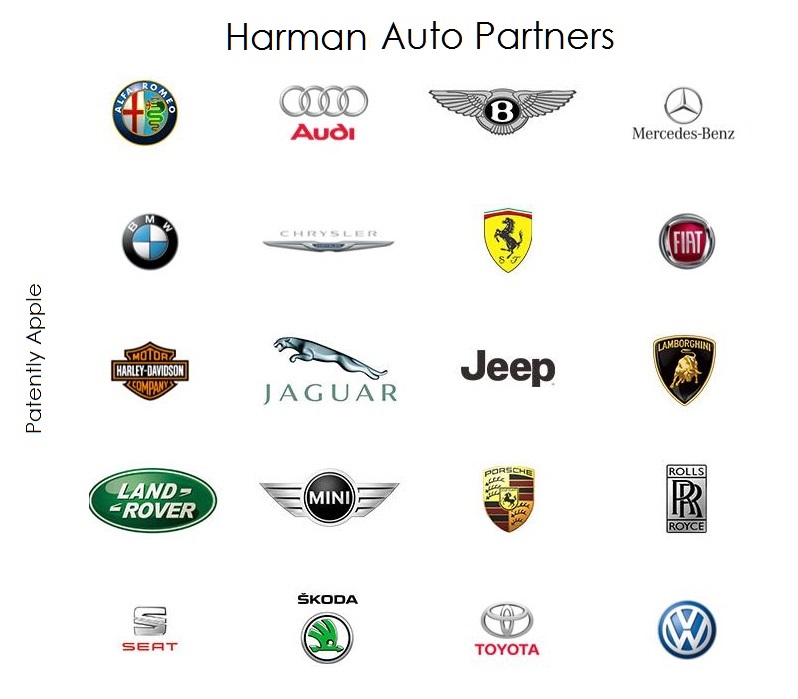 • Professional: The combination will also expand the combined company's business-to-business platform through its ability to deliver integrated, large-scale audio and visual professional solutions at stadiums, concert facilities and other performance centers such as The John F. Kennedy Center for the Performing Arts and STAPLES Center – home of the GRAMMY Awards®.

• Connected Services: Samsung will gain access to HARMAN's 8,000 software designers and engineers who are unlocking the potential of the IoT market. This collaboration will deliver the next generation of cloud-based consumer and enterprise experiences, as well as end-to-end services for the automotive market through the convergence of design, data and devices.

In Bloomberg's report on the Samsung acquisition they noted that "For Samsung, establishing a foothold in automotive technology offers the company a chance to shed its reliance on a smartphone market undergoing its worst downturn on record. The company is the world's biggest supplier of displays and memory for mobile devices -- replicating that dominance in autos will inject new life into the business. It's now struggling to put the embarrassing death of the fire-prone Note 7 behind it, while searching for its next leg of growth.

Samsung said Harman is the market leader in connected car solutions, with more than 30 million vehicles equipped with its connected car and audio systems and telematics. Telematic devices allow in-vehicle access to specific services, including car parks and anti-theft security. The Stamford, Connecticut-based company has an order backlog for the auto market of $24 billion as of June 30.

Greg Roh, an analyst at HMC Investment Securities Co said that "Harman has a scale and premium in the car-infotainment and audio businesses, so it would definitely help Samsung move faster."

Samsung's Vice Chairman Kwon Oh-hyun said in a statement that "Harman perfectly complements Samsung in terms of technologies, products and solutions, and joining forces is a natural extension of the automotive strategy we have been pursuing for some time. Harman immediately establishes a strong foundation for Samsung to grow our automotive platform."

Young Sohn, President and Chief Strategy Officer of Samsung Electronics added that "The vehicle of tomorrow will be transformed by smart technology and connectivity in the same way that simple feature phones have become sophisticated smart devices over the past decade. We see substantial long-term growth opportunities in the auto technology market as demand for Samsung's specialized electronic components and solutions continues to grow. Working together, we are confident that HARMAN can become a new kind of Tier 1 provider to the OEMs by delivering end-to-end solutions across the connected ecosystem."

Apple was miles ahead of Samsung and others with Siri and now Google, Amazon, Facebook, Microsoft and now Samsung with Viv have taken the wind out of Apple's sail. CarPlay was in the works for years and it's taken forever to get off the ground. Now with Samsung's acquisition of Harman, they're now ahead of Apple in the race to supply the automotive industry with next-gen technologies.

You would have thought that for defensive purposes Apple would have taken out key technology players to stifle the competition from being able to get in on a market they're pursuing. Apple doesn't really take that market approach and thus far it's a strategy that's worked out well for them in choosing to 'grow' a new platform from scratch rather than acquire one to build on or merge with. But now that Apple has the wealth of a small country, you have to wonder why they're not more aggressive in trying to win or dominate in a new growth areas.

For now, Samsung is hungry and this marks their heir apparent's first business deal and it's a good one for Samsung at a time when their smartphone reputation is under fire.

Park Kang-ho, an analyst with Daishin Securities Co stated for the Bloomberg report that "This is the first deal cut after Jay Y. joined the board and shows his management style is different from his father. He is an aggressive deal maker. In the longer term, Samsung is thinking that life after smartphones is electric vehicles."

Whether that's true for Apple is only something that time will tell. But for now it's clear that Samsung is getting into Apple's face with an aggressive move to acquire Viv and jam into their next smartphone to compete with the iPhone 7 and their future 2017 anniversary iPhone. And now with their Harman acquisition, it'll go a long way in challenging Apple's CarPlay, push them into competing with Apple in in high-end headphones to challenge Beats and more importantly, push them into autonomous vehicle technology's drivers seat where Apple wants to be. On that front, in the blink of an eye, Samsung is now ahead of Apple.