Home Archives Contact Us Subscribe Twitter MeWe Facebook Patently Mobile
Samsung's Troubles Continue as they Get Dragged into a Political Scandal Accusing them of Influence-Peddling
Apple's new iPhone 7 rings up Best Selling Smartphone in the U.S. and Great Britain for September

Korean Game Rating Committee Notified Google of 157 Games for Kids being too sexually Suggestive, Apple had 3 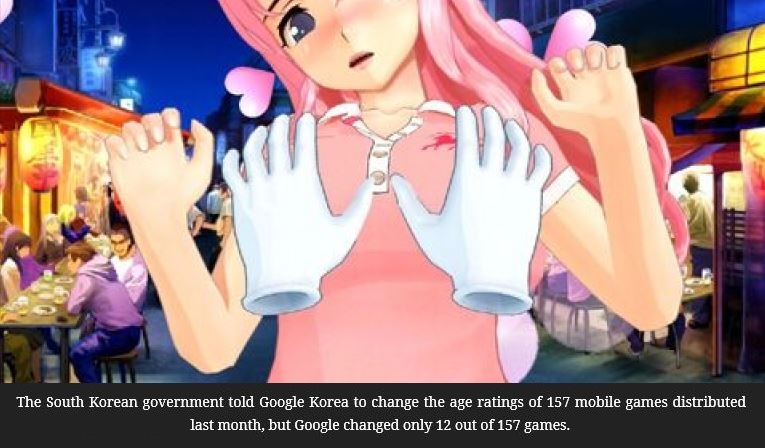 According to a Korean tech site report, the Game Rating & Administration Committee of South Korea announced yesterday that it had notified Google Korea to change the age ratings of 157 mobile games it distributes last month but Google Korea did so for only 12 out of the 157 that can be considered sexually suggestive.

The report further noted that "The committee looked last month into 552 games that are distributed on mobile app markets such as Google Play, Apple App Store and 'One Store' after the distributors' self-rating. The committee found that 160 of them are problematic in terms of sexual suggestiveness. 157 were found on the Google Play and the other three were on the Apple App Store."

The committee told Apple Korea to re-rate the three games as well but Apple Korea has not carried it out at all. Both Google Korea and Apple Korea are claiming that the difference between their standards and the committee's yardstick be acknowledged.

According to the Korea Mobile Internet Business Association, Google is currently enjoying a market share of 75% in the South Korean Android app market with 3.2 trillion won (US$2.86 billion) in sales.

The committee explained that it would compel both Google Korea and Apple Korea to follow the local age rating rules by exercising its own authority within 30 days or face criminal charges.

Considering that Apple only had 3 out of 552 games that carried sexually suggestive material for a younger audience, you have to see this move as pure politics. Clearly Apple's review process is vastly superior to most and should have been singled out with a congratulatory note for the excellent track record instead of being publicly chastised.

Side Note: It sounds like the report is suggesting that the remaining 392 games must have been attributed to the 'One Store' which I'm unfamiliar with. If you know who owns the 'One Store' please send the name in the comments section below. Thanks