Huawei is Entering the U.S. Market in January and it's Bad News for Samsung no matter how you look at it

Earlier today we posted a report about how Vice Chairman and CEO of Samsung Electronics Kwon Oh-hyeon tried to pump up his troops for the coming year by saying that "We need to be more innovative in order to strengthen technical leadership and differentiated competitive edge that are basis of business. We need to enhance our technical leadership and continuously create differentiated products and services that add more values to daily lives through creative and outstanding ideas." The US is a very important market for Samsung and their Note7 crisis couldn't have come at worse time in their history heading into 2017. In Worldwide shipments in Q3 2016, Samsung was able to hold onto a 20% market share lead, with Apple in second place with 12.5% and Huawei racing to number three with 9.3%. Yet as Samsung enters 2017, Google's Pixel phone will begin gaining more ground against Samsung, and more importantly, Huawei and likely Xiaomi will be entering the US market for the first time and that will certainly lead to further erosion of Samsung's US market position. Samsung's crisis is likely to continue for some time to come. 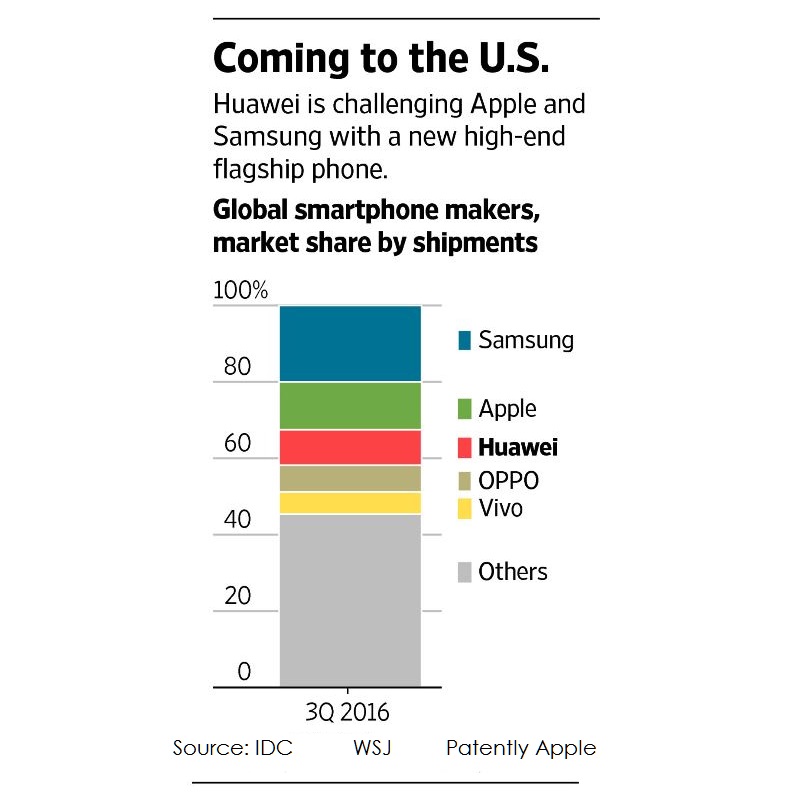 Huawei will begin their entry into the US market sometime in January 2017, according to the Wall Street Journal, starting with only an online presence. Huawei enjoyed a gain of 23% in Q3 while Samsung suffered a 13.5% year-over-year decline. With Huawei flying into Q4 against Samsung who is deeply wounded without their Note7 to assist their sales, Huawei is likely to make further gains against Samsung. Huawei could even challenge Apple for second spot worldwide by the end of 2017 as they go full tilt in the US. Though with Apple it's not about volume alone. Statistics published today show that Apple sucked all of the industry's smartphone profits in Q3 as most lost money.

Huawei will enter the US with their new flagship smartphone the Mate 9 that is likely to start at US$750. Huawei's smartphone comes with its own interface software which uses artificial intelligence to automatically keep applications, photos and videos organized. The smartphone also provides users with their second generation dual lens camera with hybrid zoom, and perhaps more importantly, provides user with SuperCharge, a feature that could fully recharge their Mate 9 in just 20 minutes for all-day battery life. And if you're a phablet fan, the Mate 9 offers a giant 5.9" display. You could see more of the phone's features and specifications here.

Yesterday we posted a report titled "Xiaomi's New 'Mi Mix' Premium Smartphone is out to steal the Industrial Design Spotlight away from Apple." While Xiaomi may be aiming to enter the premium smartphone segment of the market beyond their bargain basement brands, it will be Samsung that will be taking the brunt of such a new smartphone attack, not Apple.

While Samsung has a fierce fan base in the US and around the world, there's no doubt that more quality choices for Androiders in general next year will without a doubt hurt Samsung's US market share and dwindle their worldwide figures as well.

Samsung will be introducing their new Galaxy S8 at the Mobile World Congress event in late February and you know that they have to be praying that all goes smoothly. They're under pressure like never before and 2017 is going to be the beginning of a massive war to retain their US business just at time when Apple is planning to release their most advanced smartphone to date. I can't see Samsung coming out of 2017 any better than they're leaving 2016: Badly wounded.

If any of Samsung's many next generation smartphone form factors are close to being ready to launch, they better get it out and wave it around at their next big show to shake things up because new competition is coming to town next year and they're going to be gunning for the Android Sheriff in America, Samsung.