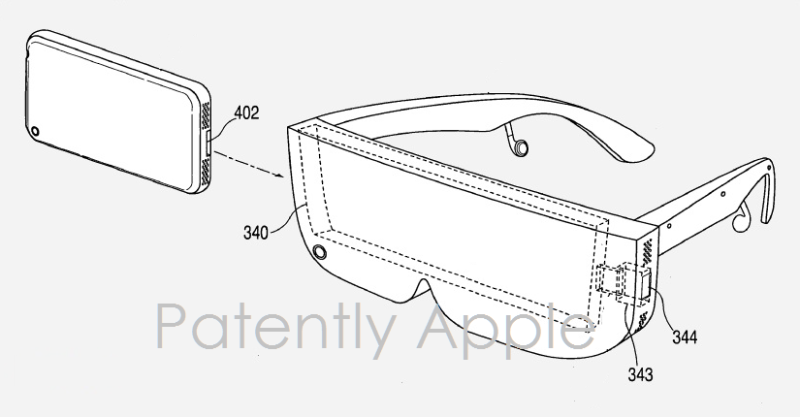 On Sunday Patently Apple posted a report titled "Google's Next Generation 'Daydream' VR Headset Surfaced in a Patent Filing this Week" In that report we showed the evolution of Google VR from a simple cardboard box through to its latest from factor that goes on sale this month and then point to what's ahead as seen through their latest patent application that surfaced last week. Today the U.S. Patent and Trademark Office granted Apple yet another head mounted display system patent that differs from their most recent patent application filed back in March.

Apple's work on a video headset began in 2007, years ahead of Samsung's Gear VR or Google's new Daydreamer headset. While it's always frustrating to see Apple's competition rush to market with a patented idea that Apple has had on record for years, Apple usually thinks a product through before launching it. Apple worked on a modern digital pen for years before launching the Apple Pencil, but when they did, it provided users with more precision and virtually no lag time, beating their competition that had various pens/styluses on the market for years hands down. Yet with that said, here's to hoping that Apple's headset comes to market in the not-too-distant future.

In today's granted patent the emphasis is place on a touch sensor that extends continuously along the eyeglass template that the user can use as a slide controller. One of the controls the touch sensor will control is the volume of the speakers within the headset. Apple's patent never talks about AR or VR but rather three dimensional viewing of content.

Apple's granted patent 9,482,869 was filed in Q1 2015 and published today by the US Patent and Trademark Office. Other Head Mounted Display system patents could be found in our Augmented Reality archives here. Apple's first granted patent for a video headset was filed in 2007 and granted in 2009. Other reports of interest on this subject include: Apple's 'Secret' VR Team isn't that Secret Anymore and Apple's Enthusiasm for Integrating Augmented Reality into Future Devices and Apps is Growing Louder.