In 2013 Patently Apple posted a report titled "Killer Patent: Apple Reveals Sapphire Flexible Transparent Display Devices Created with Liquid-Metal." It was a radical iPhone invention proposing an all-new curved glass form factor made primarily with liquid metal (or sapphire) that could take on a glass appearance. It would also introduce rotational motion detection and allow a user to scroll through a webpage or document by scroll-gesturing the backside of the device. In January 2016 Apple tweaked this patent. Then in August Apple was granted a patent for this invention. Today Apple once again is back tweaking and/or updating this invention that could alter the nature of the design. 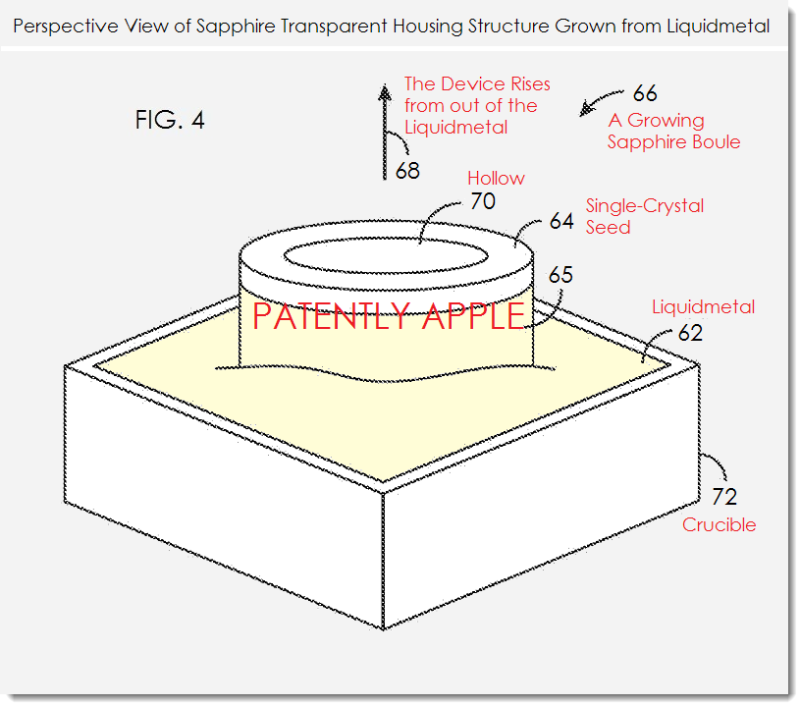 Apple's patent FIG. 4 noted above is a perspective view of a transparent housing structures being grown from a molten material by pulling a seed crystal vertically upwards.

The foundation of the patent as described under the section 'Detailed Description" never changes nor its patent figures. What changes is Apple's patent claims, the area most important in protecting characteristics of an invention that could, if necessary, be used in any court battle.


The word 'transparent' is not present in the August granted patent's claims whereas the word 'transparent' is found eight times in today's newly published patent 20160320806. A second example could be found in patent claim #10 wherein Apple notes that "the first and second opposing portions of the flexible display are planar and are connected by a rounded portion of the flexible display that conforms to the rounded edge surface of the transparent cover layer.

In March and April of this year rumors initiated by Apple analyst Ming-Chi Kuo at KGI Securities surfaced. Then in May Patently Apple posted a report titled "Apple's Rumored 2017 Curved Glass iPhone could be a Special Anniversary or Pro Model." In that report Chairman Allen Horng of Catch Technology, an Apple casing supplier, told reporters in Taiwan that as far as he knew, only one iPhone model would be adopting a glass casing in 2017.

Whether today's patent application/invention will be utilized in Apple's possible curved glass anniversary iPhone is unknown at this time. The invention that matches the rumors is either real or a red herring.

Apple filed for this invention back in July 2016, or one month prior to it being granted. Considering that this is a patent application, the timing of such a product to market is unknown at this time.