U.S. Supreme Court Hears Arguments from Apple and Samsung, Hints that Design can drive a Sale of a Phone 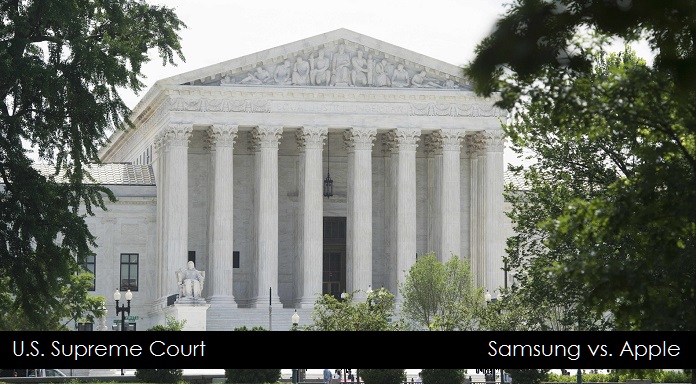 Samsung and Apple argued in America's highest court today over design patents and in particular, Apple's iPhone design patents. Samsung argued that the damages awarded in the case (some $400 million) should be greatly reduced because Apple was awarded damages on the profit of the entire phone, not just the profits on the parts that infringed Apple's patents. The three patents at issue here are related to the design of the iPhone's front face; the overall appearance of the rectangular design with rounded corners and a bezel; and the sides, back, top, and bottom of the device (the rest of the phone), as well as the circular home button, reports The Verge.

The report further noted that "Justices expressed skepticism with Samsung's argument that because a smartphone is filled with thousands of patented components that a design patent should result in awards amounting to a fraction of the total profits of the phone, though it's hard to read too much into how a Supreme Court decision might turn out from oral arguments alone.

"How do we announce the right test for that?" asked Justice Sotomayor. The design of the phone "might drive the sale." An iconic design for an automobile might come to a designer as "a stroke of genius" in just a few days said Justice Kennedy, while the rest of the car could take hundreds of days to design. "Then it seems to me that it is quite unfair to give three days' profit" to someone whose design was infringed when that design is so significant to the overall product.

From what is covered by The Verge, Samsung wants to basically dumb down patent law to only the single component that's infringed, if anything. Their argument was dumbed down to a scenario of a cup holder in a vehicle. If one holds a patent for a cup holder in a car, why should the car company have to pay a royalty on the whole car?

But Justice Sotomayor didn't but into that narrowly defined argument. Sotomayor's point was that in some cases a design might drive the sale of item be it a phone or a car. How true, especially at a time when smartphones had tons of buttons on the device interface that were ugly. In contrast Apple's iPhone design had clean device interface seeing on the display and a single Home Button that melded into the design so eloquently. Consumers were driven to that physical design and that it supported a GUI that worked completely differently than physical buttons did on smartphones of that period prior to the iPhone. However seemingly simple it is now, it was dramatic in 2007. And that's what Samsung copied. Not just rounded corners but a complete reinvention of the smartphone.

Apple strongly disagreed with Samsung's dumbed down example, suggesting that significant financial damage awards are the best way to discourage copying of patented products. How true

"Everyone at Apple is dedicated to innovation and delivering the very best products for our customers. Our designers and engineers are distinguished by their originality. And they take great pride in their work," said Noreen Krall, Apple's chief litigation officer, in a statement. "We firmly believe that strong design patent protection spurs creativity and innovation. And that's why we've defended ourselves against those who steal our ideas."

A ruling is expected before the end of the Court's term in June. For more on this story, read the full Verge report here.