Along with the clean new look of the iPhone 6 came the distracting antenna lines that some thought were stylish. While Apple has tried to tone them down a little for the iPhone 7, the antenna lines remain. Today's report covers Apple's invention that relates to how the antenna lines are formed for current and possible future iPhone designs. The location of future antennas may change as well. Apple's invention also supports previous patents about how a cellular antenna structure could be integrated into a future metal MacBook. Cellular antennas can't receive or transmit signals through metal and so Apple's invention details how they meld metal with non-metal materials together so as to form structures for antenna reception while keeping the device housing structures appealing for their customers.

Many computing devices have outer enclosures and coverings with metallic surfaces that give the device enclosures an aesthetically pleasing look and feel, as well as a high durability. Computing devices also generally include any of a number of complex functional components. For example, many mobile phones, tablets and laptops have radio frequency antennas that allow communication via radio frequency transmission.

In addition, metal is generally a high capacitive material, and as a result, not used to cover capacitive touch pads, touch screens and other capacitive sensors. Accordingly, portions of the enclosures that cover antennas and touch sensors are typically made of a non-metallic material such as plastic or glass.

Apple's invention generally relates to methods of forming unitary structures by rendering portions of a metal substrate non-conductive thereby creating conductive regions that are electrically isolated from each other. The methods can be use in various applications, including forming electrically isolated portions of electronic devices, such as enclosures and housing for electronic devices.

In the first example below the invention covers the construction of the iPhone 6 and technically the 6s and 7. The enclosure includes a unitary structure. The unitary structure includes a substrate formed of a metal and having a first portion electrically isolated from a second portion by an insulating portion formed of the metal having been rendered electrically insulative. 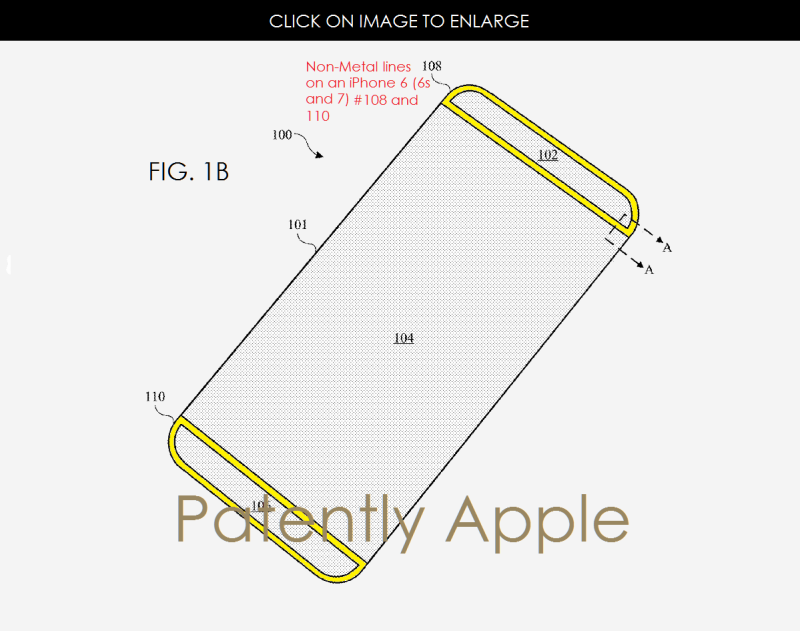 Non-metal portions #108 and #110 can be RF transparent in order to allow transmission of RF signals to and/or from antenna(s) housed within enclosure. In this way, non-metal portions #108 and #110 can sometimes be referred to as RF windows, segments or lines. RF transparent materials can be non-conductive materials such as glass, plastic or ceramic (e.g. metal oxide).

In some embodiments, non-metal portions #108 and #110 are formed by converting selected portions of the iPhone enclosure to a corresponding metal oxide using an oxidizing process, such as anodizing or PEO.

Method Applying to a MacBook 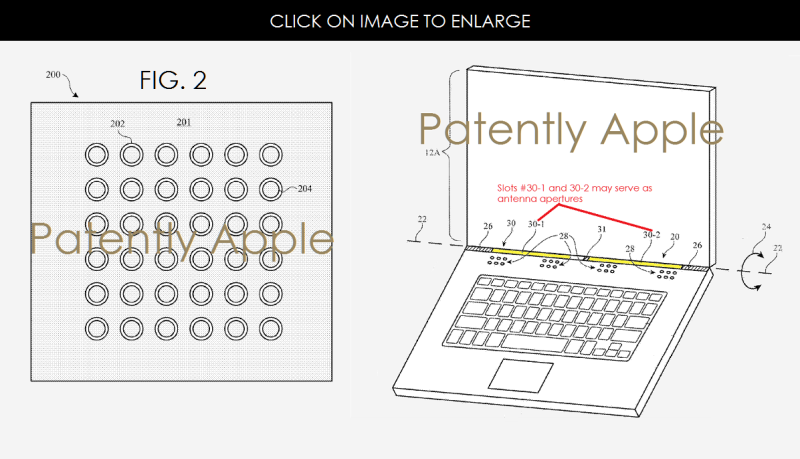 In September Patently Apple posted a report titled "A New Apple Patent Shows their Renewed Interest in a Cellular MacBook," wherein we illustrated an Apple patent figure as noted above where new cellular antenna holes could allow for RF transmissions for an antenna. In this week's patent application Apple describes patent FIG. 2 as being micro holes placed into a metal body like a MacBook that would allow for a cellular antenna.

Apple's patent FIG. 2 shows part or structure #200 that can be part of an electronic component of a larger electronic device like a MacBook. The structure includes a metal substrate #201, which can correspond to a metal material that can form a durable oxide, such as aluminum or aluminum alloy.

The last example relates to a possible future iPhone that integrates different antenna locations and/or shapes.

Apple's patent FIG. 5 illustrated below shows us a perspective view of substrate #500 after undergoing an oxidizing process. The substrate can be part of an enclosure for an electronic device, such as a mobile telephone. The substrate includes metal portions 502, 504, 506, 508 separated by intervening metal oxide portions 510, 512, 514. 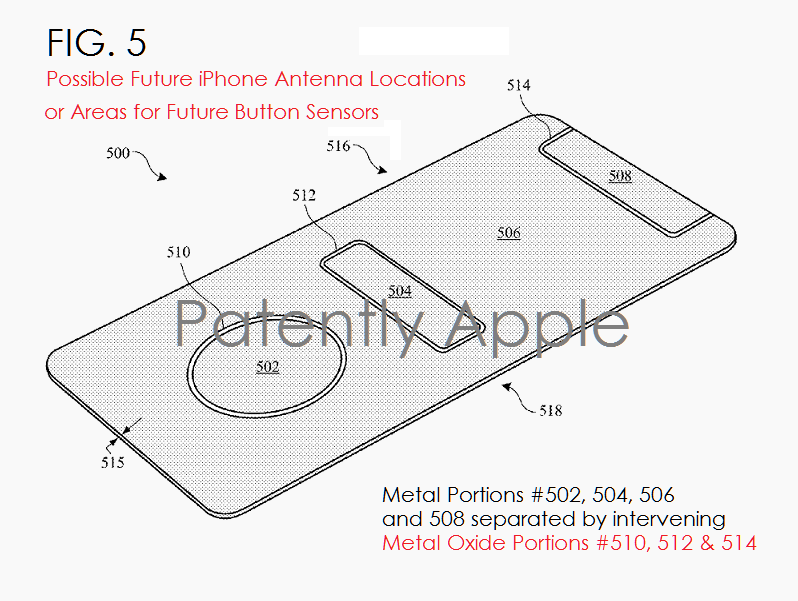 Apple's patent application 20160302319, which surfaced at the U.S. Patent Office on October 13, 2016  was filed by Apple back in Q4 2015. Considering that this is a patent application, the timing of such a product to market is unknown at this time.