On September 26 Patently Apple reported that Samsung's Galaxy Note7 battery issues were continuing with their replacement units. The initial reports out of South Korea complained about a Note7 replacement phone overheating quickly in addition to experiencing battery drain at about 1% every second. Then the news of the disastrous Southwest Airlines incident came to light on October 5 that truly turned the tide against Samsung. It was clear that the battery issue had gone beyond just the battery to perhaps a faulty Note7 design. This incident really crossed the line because of its magnitude and how it could have affected many lives if the phone were to have exploded mid-flight. The Verge struck out against Samsung on October 7 saying it was time to amputate the Note 7 and admit defeat. Yesterday Focus Taiwan reported that another Note7 exploded in Taiwan while a woman was taking her dog for a walk. She had picked up her replacement Note7 ten days ago. Forbes picked up on the story and said it was worrisome because in the recent incidents the phone caught on fire while not even being charged. Forbes noted that while most tech writers gushed over the new Note7 initially, they were now openly turning their backs on the product which is going to damage Samsung's reputation in the U.S. and Canada save for Samsung fanboys who are in complete denial.

This morning The Verge is reporting that Samsung knew of a third replacement Note7 that caught on fire this past Tuesday and said nothing. It's another damning report that should be rubbed in Samsung's face because of a Samsung text message about the incident showing their complete arrogance.

The Verge reported "Another replacement Samsung Galaxy Note 7 has caught fire, bringing the total to three this week alone. This one was owned by Michael Klering of Nicholasville, Kentucky. He told WKYT (video) that he woke up at 4AM to find his bedroom filled with smoke and his phone on fire. Later in the day, he went to the hospital with acute bronchitis caused by smoke inhalation.

"The phone is supposed to be the replacement, so you would have thought it would be safe," Klering told WKYT, saying that he had owned the replacement phone for a little more than a week. "It wasn't plugged in. It wasn't anything, it was just sitting there."

The most disturbing part of this is that Klering's phone caught fire on Tuesday and Samsung knew about it and didn't say anything. And actually, it gets worse than that.

Samsung asked Klering if they could take possession of the phone and he said no, though the company did pay to have it x-rayed — but the damning evidence comes in the form of a text message that Klering inadvertently received from a Samsung representative:

"Just now got this. I can try and slow him down if we think it will matter, or we just let him do what he keeps threatening to do and see if he does it"

The report concluded that "The Samsung Galaxy Note 7 is a fundamentally defective product and it should be pulled from the market without delay."

Reuters reported one Samsung insider saying on Friday that "The crisis is worse than any other the company has faced. It directly impacts our products, our brand, and trust with consumers."

Samsung's panicking and it's clearly overwhelming them. Reuters further noted that "Samsung insiders say that the unassuming Koh Dong-jin (President of Samsung Electronics' Mobile Communications Business) needs to get sales moving again so that the company can salvage the fourth quarter and defend market share against Apple Inc and other rivals." 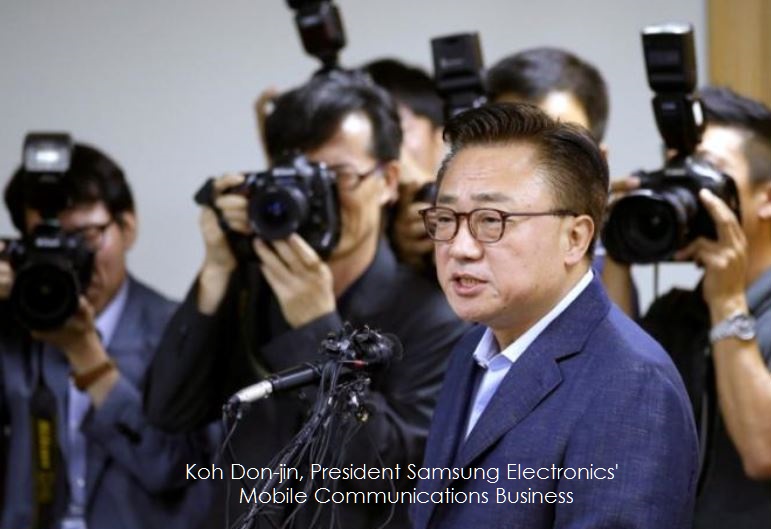 This is where Samsung's mindset is really at. It's not about the safety of their customers as their marketing machine has been spinning it, but rather bottom-line profits and winning mind-share over Apple's iPhone 7. It's an obsession that sickening.

Reuters added a second Samsung source saying that "If this doesn't get fixed quickly, everybody loses."

David Lowes, Samsung's chief marketing officer in Europe, told Reuters that "We will give Note 7 all the support we were going to give it in the first place. There is no backing away from it."

My lord, Samsung's disregard for the public is mind boggling and U.S. authorities should now act swiftly to keep Americans safe by banning the product outright. They have to because Samsung has made it crystal clear that they're doubling down on the Note7 come hell or high water and will not admit defeat or that their product is a safety hazard, end of story.