The top reason that Apple's iPhone 6 mania swept the globe back in 2014 was because they introduced their first phablet to go toe-to-toe with Samsung who pioneered that category. Samsung laughed at Apple's late entry into this category believing that they owned that segment lock, stock and barrel. They made the very same mistake that Steve Ballmer did when Apple's iPhone first came to market. Ballmer openly and heartedly laughed at Apple's new gadget and yet he laughs no more. While Samsung tried to play it down, the fact is that in 2014 Apple smashed South Korea's record for a foreign company selling smartphones. They took 33% market share that year, easily overtaking LG and dropping Samsung down from 60% to 46%. Samsung's smartphone sales, and more importantly profits, plummeted for two years running after the release of the iPhone 6 and 6 Plus. To this day Samsung's Heir Apparent was hoping that the "Galaxy Note7 would outflank the iPhone 7 and it wasn't meant to be. The Note7 was rushed to market to beat the iPhone 7 and cutting corners led to the Note7 battery crisis and demise of this year's Note smartphone; a complete derailment.

As we noted earlier, LG was the other smartphone looser in 2014/2015 when Apple's iPhone 6 mania swept the globe. In an effort to regain their place in the sun, LG also took a big gamble this year when they introduced their bold new LG 5, the "World's first smartphone with modular expandability." An idea that they borrowed from Google's failed moonshot known as 'Project Ara.' 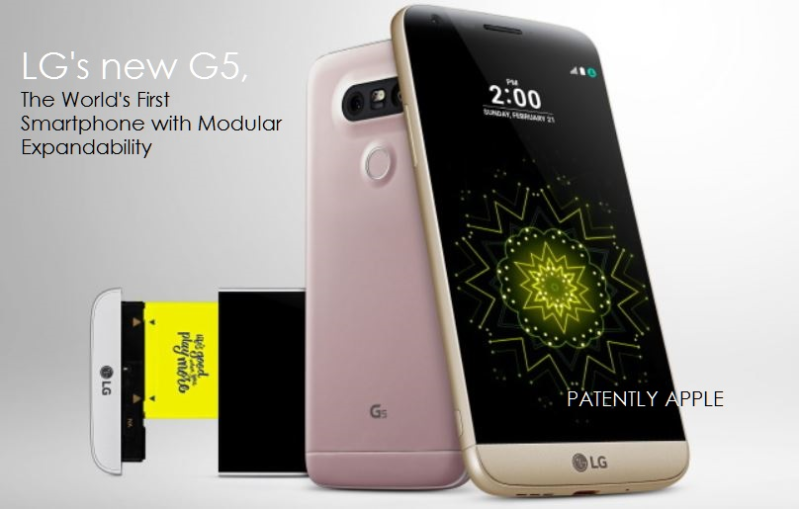 According to the Korean press today, LG has unofficially killed their modular smartphone concept and will return to a standard smartphone structure for their 2017 G6 smartphone. Insiders say that they will be abandoning the 'Modules' framework.

The report further noted that "LG Electronics was not able to achieve results that it expected because need for modules was not really needed when people had actually used the G5. There was inconvenience in removing and attaching modules and users had to buy additional devices." 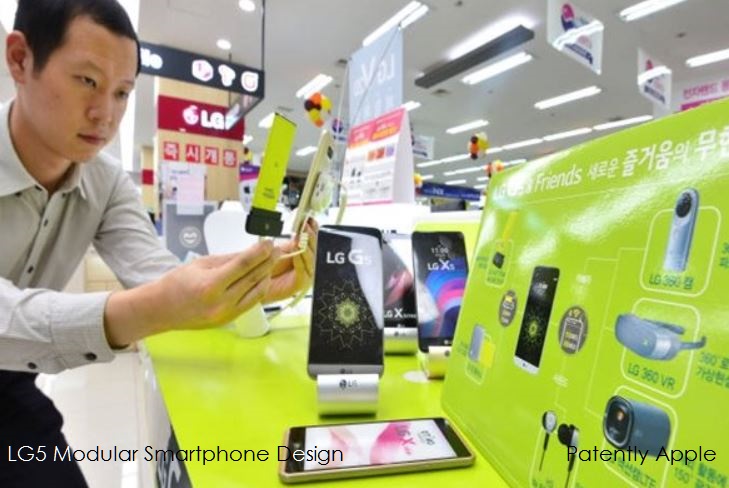 They also noted in their report that "Sales of the G5 were very low as there was a problem regarding production yield due to the more complicated module structure. Even LG Electronics admitted that the G5 was not a success and it led to huge change in executives who were responsible for development of G5."

With the demise of Samsung's Note7 due to never ending reports of exploding phones, Samsung was trying to maintain a brave face and announced that their new Galaxy S8 would introduce dual cameras like the iPhone 7 Plus, no Home Button and the world's first 10nm processor. The also hinted that they might introduce a foldable smartphone to excite the market with. Then two weeks ago another Samsung foldable phone patent came to light with more advanced models being contemplated.

Last week a new Samsung patent surfaced at USPTO that revealed a more advanced scrollable smartphone/tablet/TV. This is Samsung's third major patent on the subject. The first two could be reviewed here and here. Their third patent which was filed in the U.S. in February 2016 and published last week illustrates a more refined idea for a scrollable device.

Samsung's patent FIGS. 12 to 15 noted below are views illustrating content being displayed on a display area as a flexible display of an electronic device is being withdrawn or retracted 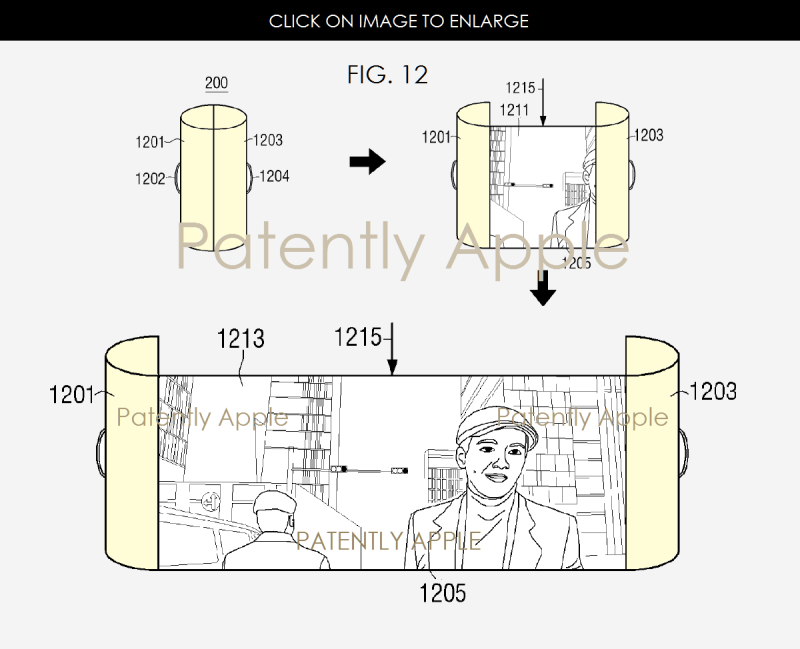 Samsung's patent notes that "This type of flexible display may be used in an electronic device such as a TV, a mobile device (smartphone), tablet PC and the like." Interestingly, they place a lot of emphasis on a scrollable TV. For example, they note that "a flexible display may be mounted on a main body of a TV such that it may be withdrawable or retractable, thereby realizing a wall-mountable TV. 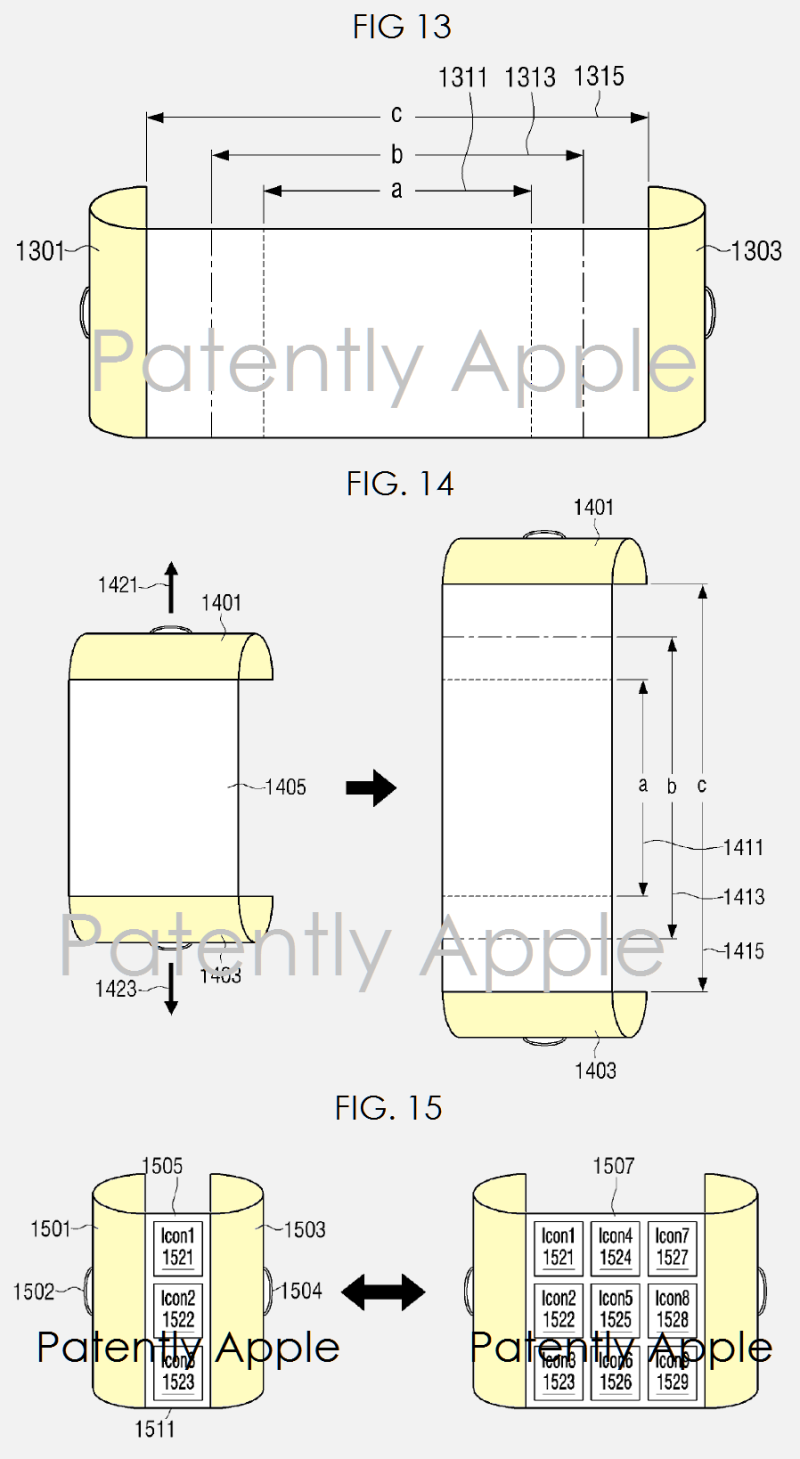 Whether it's mobile and/or stationary, the marketing angle may be that either or both will relate to a next-gen television.

Also noted in the Korean tech press today was Qualcomm announcing in Korea that their next generation G5 modem would be available for smartphones either in late 2018 or 2019 in that country. Samsung and LG are expected to be able to take advantage of this first and Qualcomm talked about being downloading a 1.5GB film in just three seconds flat.

So bendable and scrollable smartphones (and other devices) are on Samsung's mind as they seek a new form factor that could provide them with a longer standing edge over Apple that they lost when the iPhone 6 Plus phablet came to be.

Will Samsung be able to find another another home run in the coming years ahead to take on Apple's iPhone or will all of their fancy patents be sold in the form of a coloring book of fantasy inventions for children? Only time will tell.