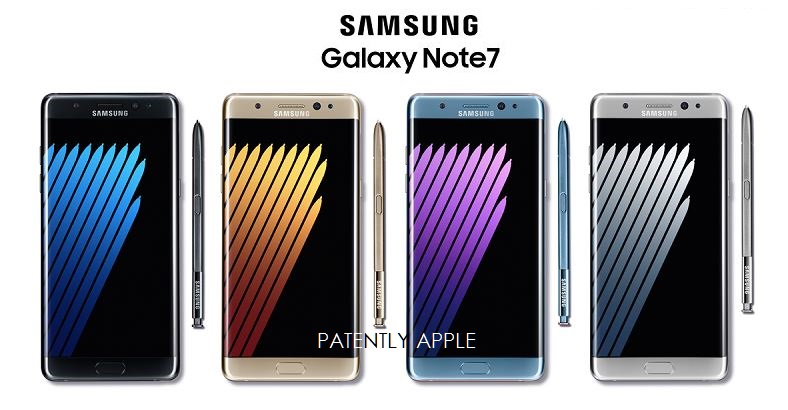 Last Wednesday Patently Apple posted a report titled "Compounding Problems for Samsung Could Escalate into a Wider Disaster." In that report we noted that around 60 local consumers so far are preparing to file a class action suit and the number is expected to rise 600, according to Seoul-based Harvest Law Office representing the plaintiffs." Ko Young-yeel a lawyer of Harvest Law Office told the Korean publication that "We will gather more plaintiffs by Friday and submit a petition to the Seoul Central District Court on Oct. 24." Right on cue, more than 500 South Korean Galaxy Note 7 smartphone owners have filed a lawsuit against Samsung yesterday, seeking compensation for the Galaxy Note 7 disaster.

Attorney Ko Young-yeel, the head of the Harvest Law Firm, said yesterday that "The consumers' rights were severely violated as Samsung stopped production of the Galaxy Note 7 and asked consumers to replace the phone with other models. The group submitted the petition to the Seoul Central District Court, seeking 500,000 won (US$441) compensation per person in their initial claims.

Ko said, "The Galaxy Note 7 consumers were also deprived of their rights to get after-sales service as well as the rights of choice. The company should compensate for the mental distress caused by such a situation. Although the consumers bought the expensive product worth 1 million won (US$883), they had to waste their money and time to check on their batteries and exchange their phones. The company said that they would offer discounts when changing their phones, but it cannot be compared with the damages they had to go through." This is likely just the tip of the iceberg. More class action and/or individual lawsuits are expected to be launched within the year.