The US Patent & Trademark Office published a patent application from Apple that reveals a system and method for configuring and adjusting beam patterns output by a speaker system in response to voice commands. This new invention relating to Siri could apply to Macs, iDevices, Apple TV, a gaming console, internet streaming music or movie service. In one embodiment, user profile settings are content based such that each setting in a listener's user profile may have separate values for different content types. For example, a volume setting may have separate preferred values for music, movies, television, etc. These content delineations may be further divided based on genre (e.g., separate volume settings for comedy movies, honor movies, and drama movies).

Although beam patterns allow sound to be focused in different directions and/or at specific objects or individuals, configuring beam patterns is often a complex and arduous process. For example, as noted above, configuration of a beam pattern may require individually and separately adjusting delays and energy levels of driving signals for each transducer in a loudspeaker array to achieve a desired result.

Apple's invention covers an audio system that adjusts one or more beam patterns emitted by one or more loudspeaker arrays based on the preferences of users/listeners.

Inputs from the listener location estimator, the listener identifier, and the voice command processor are fed into an array processor. The array processor drives the one or more loudspeaker arrays to emit beam patterns into the listening area based on inputs from each of these devices. By examining the location, historical preferred usage settings, and voice commands from listeners, the generated beam patterns are customized to the explicit and implicit preferences of the listeners with minimal direct input.

Apple's patent FIG. 5 noted below shows a method for adjusting sound emitted by the loudspeaker array; FIG. 6A shows an example of a listener speaking separate voice commands. 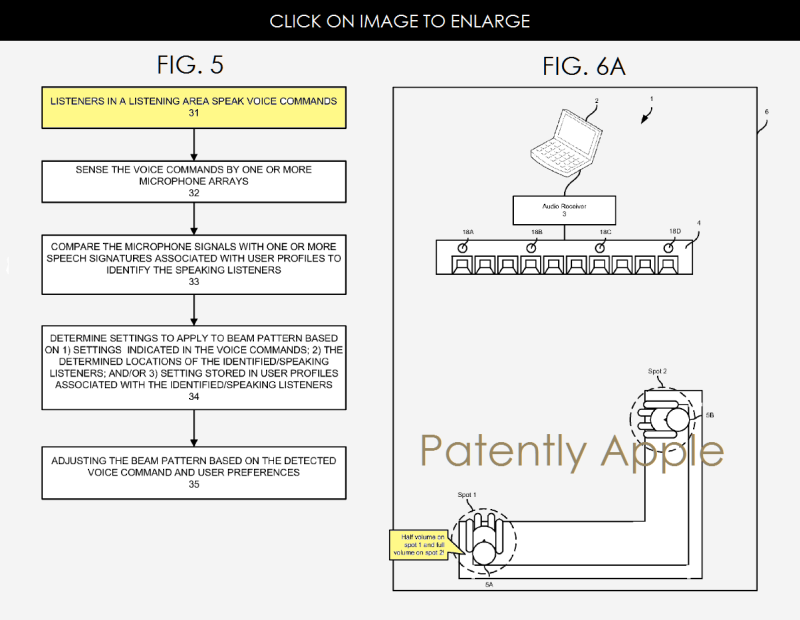 Apple's patent FIG. 7B shows a beam pattern generated for listeners based on example voice commands. 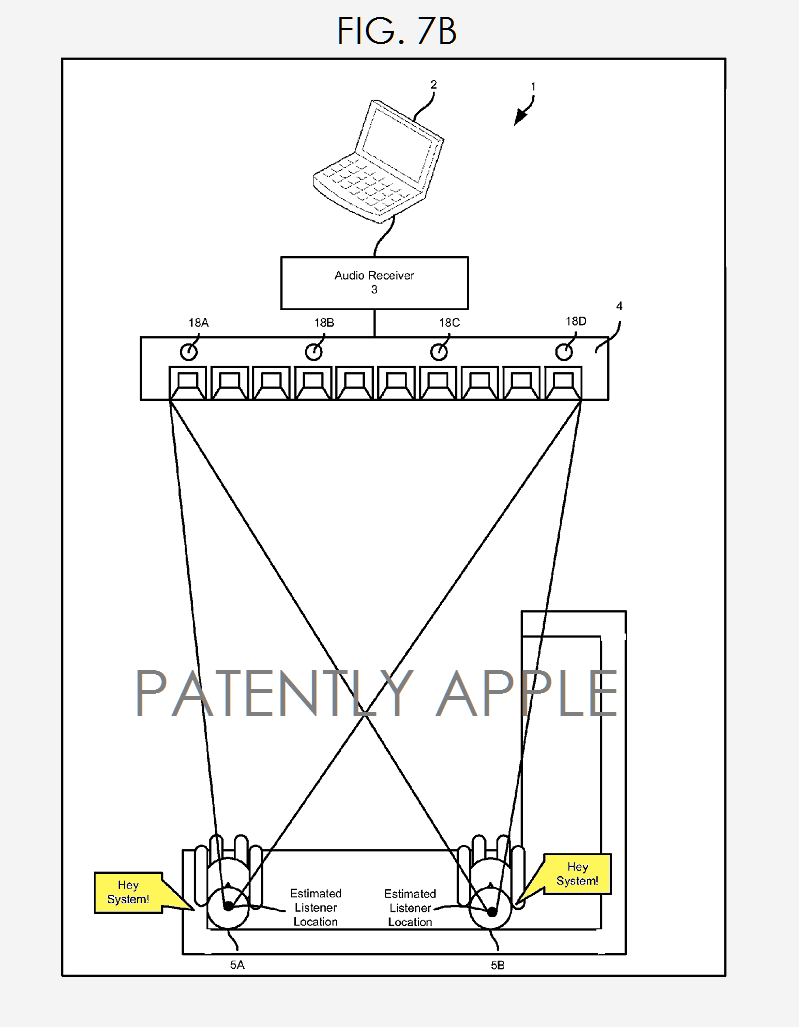 Apple's patent FIG. 4D shows the estimated location of a listener in the listening area. 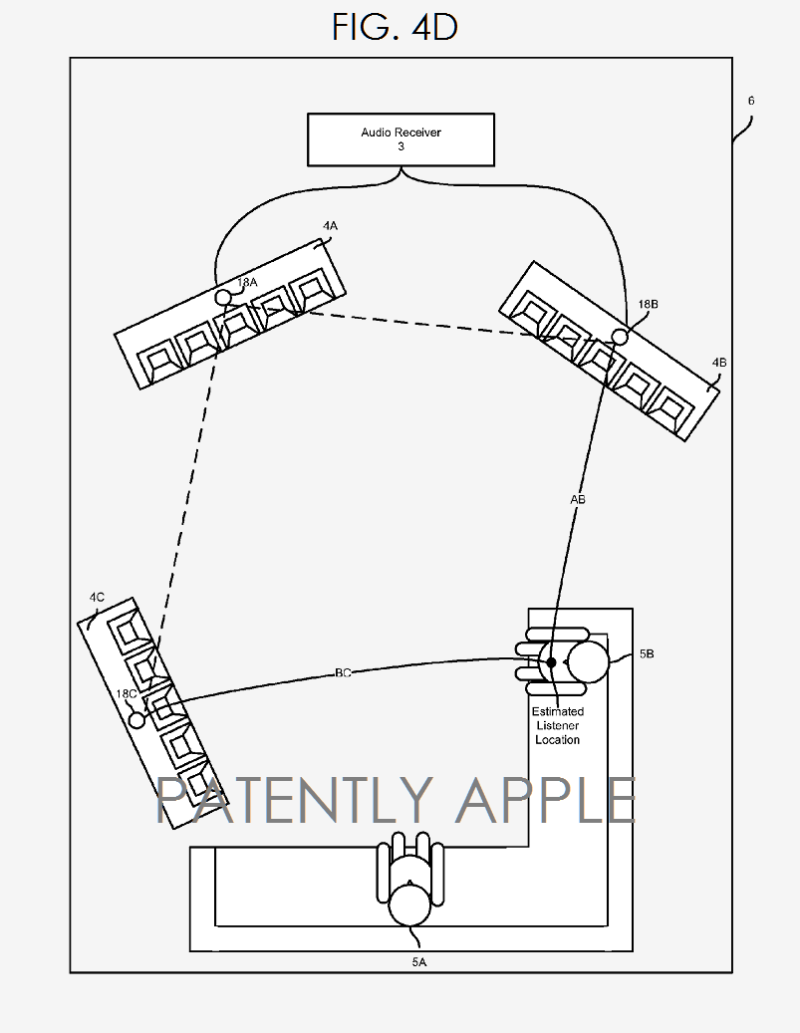 Apple's patent FIG. 3 noted below shows us a functional unit block diagram and some constituent hardware components of an audio receiver. 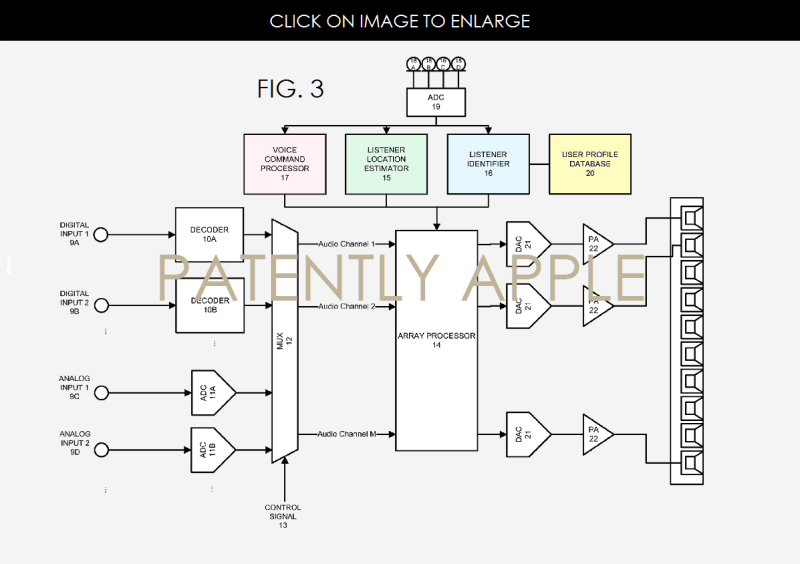