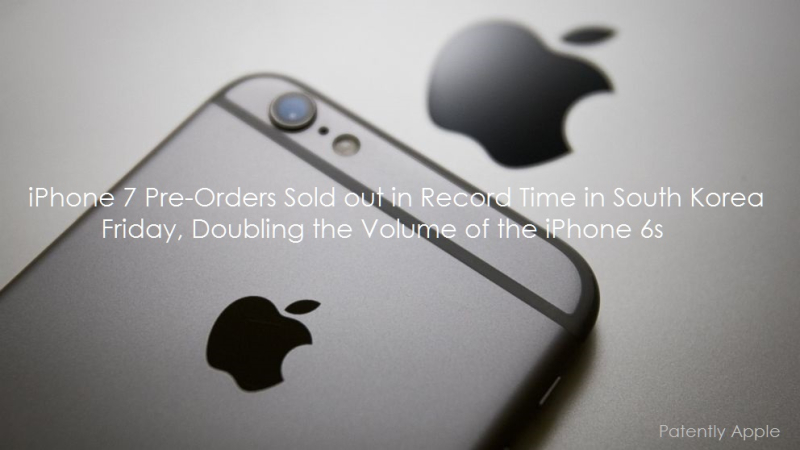 Apple's iPhone 7 pre-orders in South Korea began on Friday, one week prior to the official launch as previously reported. According to a new Korean report today, "Apple's latest smartphone model iPhone 7 is enjoying unprecedented popularity at least partially due to the tribulation suffered by its rival Samsung Electronics in relation to its Galaxy Note 7. Apple's iPhone 7 and iPhone 7 Plus were sold out as soon as the three major mobile telecom service providers began taking pre-orders at 9 am on October 14." The fact the iPhone 7's have sold out so quickly shouldn't surprise anyone being that back in July Patently Apple reported that a Gallup poll revealed that South Koreans in their 20's preferred Apple's iPhone over Samsung's Galaxy.

The report further noted that "KT, for example, closed its online application for 50,000 iPhone's within 15 minutes after launching the site. SK Telecom saw its first and second pre-orders sold out within 20 minutes and 1 hour each. A telecom company official said, 'Comparing to the iPhone 6s debuted a year ago, pre-order volumes have doubled for the iPhone 7. It's like Apple is having a field day in a situation where its rival is incapacitated due to the Samsung Galaxy Note 7 saga." The iPhone 7 series will make a debut in the Korean market on October 21."

Apple wants to further tap into South Korea's fever for their iPhone and is currently scouting top locations in Seoul to open their first flagship store.

While Apple's iPhone 7 is enjoying unprecedented pre-order sales in South Korea, it's being reported today that "Samsung has advised an estimated 1 million Galaxy Note 7 users to stop using the device, citing a recent emergency order from the U.S. Department of Transportation (DOT) that banned all Note 7 smartphones on airline flights there."

The Korea Times further noted that Samsung said in a statement Saturday that "We encourage any Note 7 users to be sure to get a refund or change the device with other models before any flight. We apologize for causing inconvenience following orders from the DOT and Korea's Ministry of Land, Infrastructure and Transport."

Samsung further noted that "it had been running Samsung Electronics' rental phone booths at Korea's major airports in Incheon, Gimpo and Gimhae for people who had yet to return Note 7 devices. According to data from predictive app intelligence company Apteligent, more than 1 million Note 7 devices were still being used as of Wednesday."

That stubbornness of not returning and/or exchanging the Note 7 could cost any customer flying on a U.S. flight a heavy fine or prosecution.

In early September Patently Apple reported on the anger expressed by the Korean press for the first Note 7 recall stating that it was a protectionist move to promote Apple over Samsung.

Now that Samsung has honestly acknowledged that the Note 7 had a serious enough problem that they had to end production and that they still don't know what the root of the problem is to this day, some in the Korean press are still seething over U.S. authorities push to kill the Note 7, even in light of a Note 7 exploding into flames on a recent airline flight in the U.S. In a report posted on Friday, Business Korea pointed to four iPhones catching on fire in the last two years.

Business Korea has pathetically tried to equate four iPhone fires over two years to dozens for the Note 7 in a matter of weeks. In one incident, it put an aircraft and its passengers in serious danger. In that light, you'd expect a business publication to be far more rational and balanced.

The Business Korea report further stated that "Cases where the iPhone burst into flames have been steadily reported since its early models. Since late last year, at least four cases where the iPhone caught fire have been reported through media at home and abroad. The cases involve iPhone models launched over the past two years such as the iPhone 6, iPhone 6 Plus, iPhone 6S, iPhone 6S Plus, iPhone 7 and iPhone 7 Plus. According to media reports, the US Consumer Product Safety Commission (CPSC) is looking into what caused such fire."

They even went so far as to bring up that "Apple also experienced 'humiliation.' It was a global recall of batteries in the iPhone 5 in 2013. At that time, Apple replaced batteries of the iPhone 5 free of charge.'"

Even that aspect of their story is a complete stretch. Apple officially stated in 2014 that "Apple has determined that a very small percentage of iPhone 5 devices may suddenly experience shorter battery life or need to be charged more frequently."

There was no humiliation on Apple's part and it wasn't about their smartphones exploding and catching on fire causing injury or burning out a car or causing an expensive evacuation of an airline flight. This is the second time a South Korean reporter has irrationally covered Samsung's crisis in a light where the U.S. was unfairly handling the Samsung Crisis.

In the end, it's the Korean press that should be humiliated for being shown to be callous and disrespectful to Samsung's U.S. customers who have suffered trauma and burns due to the blatant defect in the Note7 smartphone. These Samsung fans should be offered an apology rather than receiving scorn for hurting Samsung's reputation that is well deserved at this time.