Home Archives Contact Us Subscribe Twitter MeWe Facebook Patently Mobile
U.S. Supreme Court Hears Arguments from Apple and Samsung, Hints that Design can drive a Sale of a Phone
Samsung's Heir Apparent was hoping for the Galaxy Note 7 to outflank the iPhone 7

Apple the only Major PC Company to have Negative Shipments in the U.S. and Worldwide for Q3

IDC's latest Worldwide PC report states that shipments totaled nearly 68 million units in the third quarter of 2016 (3Q16), a year-on-year decline of 3.9%. Apple shipments continued to decline as the company prepares to refresh its PCs later this month. Apple's decline of 13% for worldwide shipments was by far the sharpest of any major PC vendor. For U.S. shipments, we turn to Gartner who shows us that Apple was the only PC company to have suffered a major loss in shipments in Q3, down 10.7%. Lenovo and HP continue to slug it for top spot Worldwide with HP showing gains while Lenovo shows loses for the quarter as noted in the chart below. 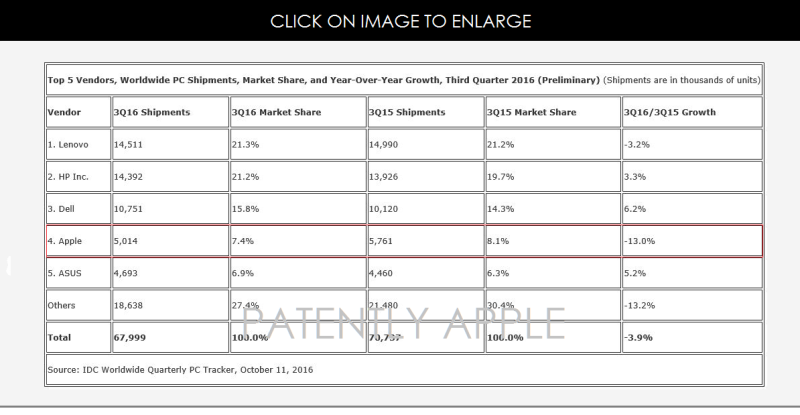 According to IDC, mature regions continued to perform best, with the United States taking the lead with a second consecutive quarter of positive growth. In other developed markets growth was stable or improved slightly with near flat growth in Japan and Canada, followed by a small decline in Europe, the Middle East and Africa (EMEA). Shipments in Asia/Pacific (excluding Japan) continued to decline in mid-single digits while Latin America struggled with double-digit declines. For more color on these numbers, see the full IDC report here.

To get the bigger picture, Gartner's report is a little gloomier with PC sales down 5.7% for Q3, 2016. The one consistant is that Apple is down over 13%.

The excuses or reasons, depending on your take of the market, are that emerging markets use phablets or tablets for their computing needs and in North America you have parents passing down their PC's to the children which slows down the PC cycle of upgrading.

In Gartner's U.S.-only PC shipment chart, Apple was the only major company to see a decline which clocked in at -10.7%. For more details, see Gartner's report here.