The U.S. Patent and Trademark Office officially published a series of 55 newly granted patents for Apple Inc. today. In this particular report we cover wearable displays, face recognition, Touch ID and an inductive charging system. Apple's master wireless charging system was first introduced way back in 2013. While I'm not making any predictions, because it's likely years away, it would certainly be a knock-out surprise if Apple were to deliver on this type of invention at their 'Hello, Again' Mac event on Thursday. Making a new iMac the central hub for wireless charging our mobile devices would definitely make headlines. We wrap up this week's granted patent report with our traditional listing of the remaining granted patents that were issued to Apple today.

Apple's newly granted patent covers their invention relating to conformable electronic devices, packages, and methods of formation. The conformable electronic devices may be integrated with a variety of applications and products, ranging from textile products (e.g. as a wearable display as illustrated below) to product packaging materials (e.g. shrink wrapping). Additional embodiments include other wearable flexible surfaces, such as wristbands, watches, hats, shoes, pants, shorts, gloves, etc. 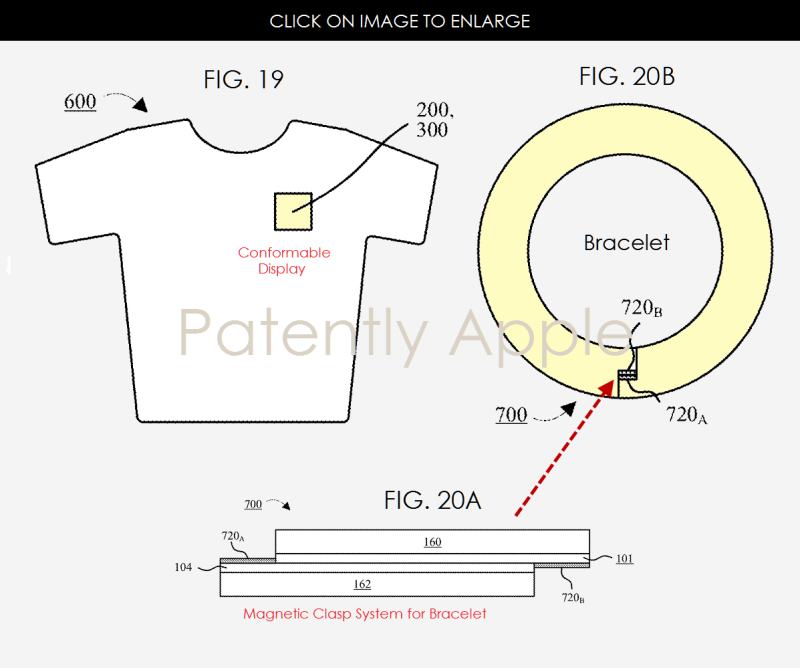 One application will allow manufacturers to update pricing, branding, or promotional materials displayed on a package without expensive repackaging costs. Apple could also use this in connection with Apple Watch band smart links that could add new functionality to Apple Watch. In context with a bracelet, it could be a way to cover a future Fitbit-like device as part of the Apple Watch line-up.

Patently Apple covered this invention as a patent application back in June of this year and you could check it out here for more details. Apple's granted patent 9,478,583 was originally filed in Q4 2014 and published today by the US Patent and Trademark Office.

Apple's newly granted patent covers their invention relating to a possible future iPhone configured to automatically lock based on determining that a user's face is no longer present in images captured by the device's built-in camera. For instance, consider that the device is initially unlocked. In that state, a built-in camera captures one or more images, and the images are then analyzed to determine whether a user's face is present. If a user's face is not present in the images captured over a predetermined amount of time, the device automatically locks. Thus, the device is automatically locked when it determines that no user is currently using the device without having to wait for an idle timer to expire or a manual switch off by the user. The camera capturing and face recognition processing may be triggered by the device having detecting that it has been motionless for a threshold period of time. When movement of the iPhone is detected, the camera captures a new image and unlocks the device if it's the authorized owner.

Patently Apple covered Apple's invention as a patent application back in 2012. Apple's granted patent 9,477,829 was filed in Q1 2015 with history dating back to 2011. It was published today as a granted patent by the US Patent and Trademark Office.

On the topic of securing your iPhone/iDevices, Apple was also granted patent 9,477,870 which relates to Touch ID as noted below. Patently Apple covered this invention as a patent application back in November 2013. Check out that report for more details and graphics. 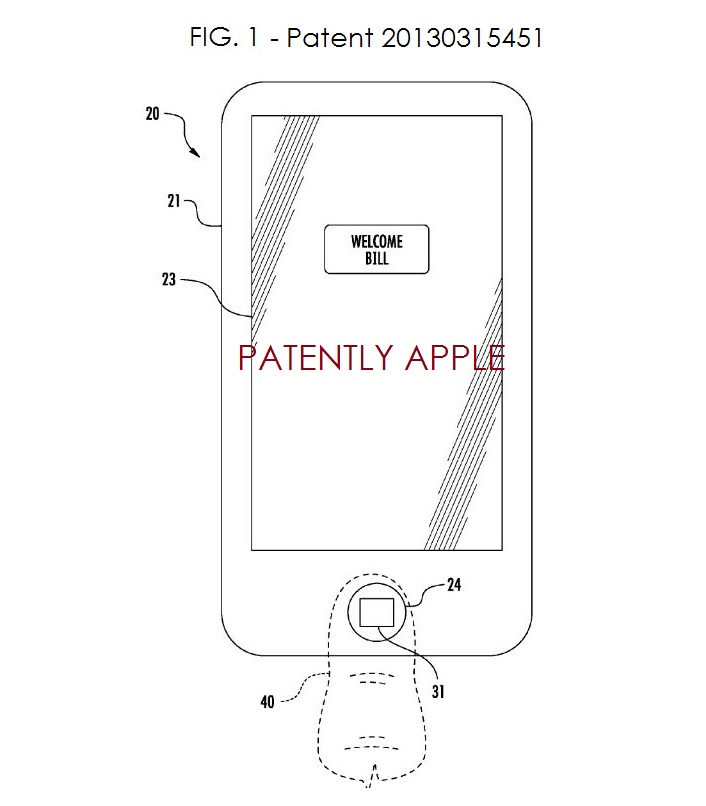 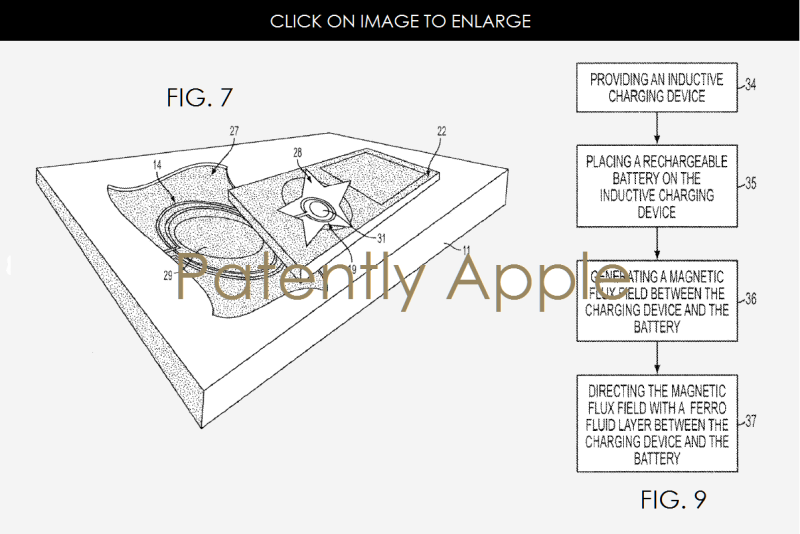 Patently Apple posted a report back in September titled "Apple Patent Reveals their Continuing work on an Inductive Charging Station," showing that three years after Phil Schiller downplayed such a device, Apple continued working on an inductive charging system.

Apple's most sophisticated and comprehensive invention on wireless charging to date was published back in September 2013. Patently Apple covered it in a report titled "Apple Reveals Master Details of Wireless Charging System."

Apple's master wireless charging invention would be an exciting breakthrough development if Apple decided to surprise us on Thursday during their 'Hello, Again' Mac event. Could this be the time? I'd love to think so, but you never know when an Apple patent will come to life.So it's not a prediction but rather a hope.

Today's inductive charging system invention was published today as granted patent 9,479,007 which was filed in Q1 2014. 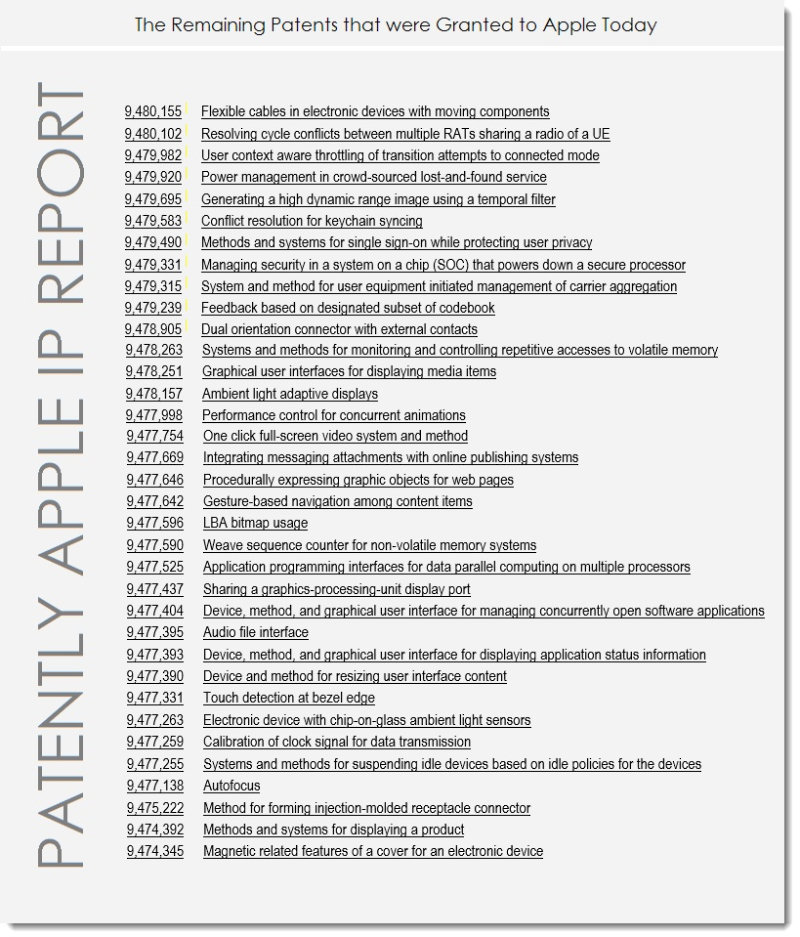