Home Archives Contact Us Subscribe Twitter MeWe Facebook Patently Mobile
The First Shipment of the iPhone 7 Rolls out for the U.S. and UK
Apple Could Send Samsung into a Panic Today if the iPhone 7 works with Apple Pencil

In July Patently Apple reported that TSMC had landed an exclusive deal for Apple's 2017 A11, 10nm FinFET processor and noted in that report that the next war with Samsung would be for Apple's business for next-gen 7nm processors for the 2018 iPhone. TSMC's CEO Mark Liu stated at their second quarter performance presentation that he believed that their "7-nano chips are superior than Samsung Electronics' chips in PPA index that indicates Power, Performance, and Area. We are going to start on tape-out on 7-nano chips in first quarter of next year and start mass-producing in early 2018." Today, TSMC's Simon Wang, senior director of business development reiterated that volume production is on target for Q1 2018.

Speaking at a pre-show press conference prior to Semicon Taiwan, Wang indicated that semiconductor market growth over the next five years will be driven by the smartphone, high-performance computing (HPC), Internet of Things (IoT) and automotive electronics fields. 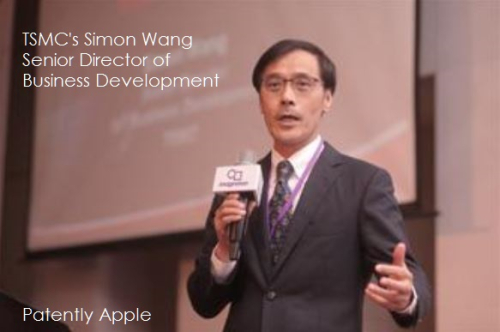 TSMC's growth through 2020 will be driven mostly by the smartphone sector, said Wang, adding that a growing number of ICs used per device and robust demand for integrated solutions that enable more smartphone features are contributing to half of TSMC's growth.

TSMC is committed to providing its customers with robust process technologies, Wang noted. The foundry disclosed previously its 10nm process had received product tape-outs from three clients, and the node would start generating revenues in the first quarter of 2017.

Moving forward, TSMC expects to ramp up production of 7nm chips in the first quarter of 2018, Wang said. TSMC is confident the PPA (power, performance and area) on its 7nm process technology will outperform rivals', Wang added.

In addition, TSMC has been engaged in R&D for 5nm process technology, and will be ready to use extreme ultraviolet (EUV) lithography to make 5nm chips, Wang said. Risk production is expected to complete in the first half of 2019, Wang indicated.

In our July report we noted that "TSMC and Samsung both officially announced that they will use EUV (Extreme Ultraviolet) lithography equipment. "We are going to receive ASML's 2 most recent EUV equipment called NXE3400 in first quarter of next year and use them partially for producing 7-nano chips." said CEO Liu. "EUV equipment will be used to produce 5-nano chips in 2020."

TSMC is also making progress in the development of its backend business as we first noted in August. TSMC's Wang noted that backend integrated fan-out (InFO) wafer-level packaging (WLP) technology has already been adopted by many of its foundry customers, and is expected to generate revenues of more than US$100 million in the fourth quarter of 2016, Wang said.