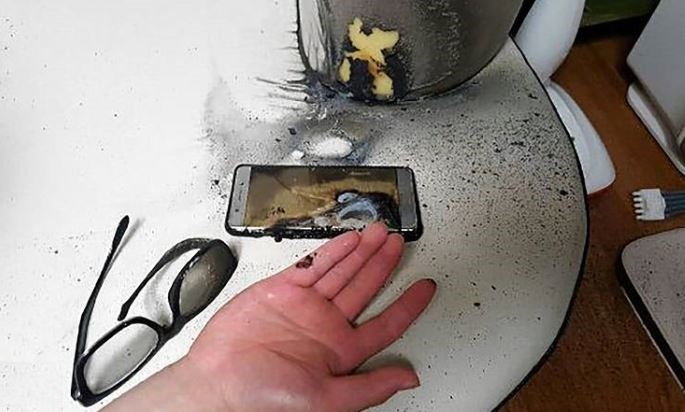 On Monday Patently Apple posted a report titled "Korean Press Report Goes Ballistic Calling the U.S. Recall of the Note 7 a Protectionist Move to Protect Apple." Yes, there's a lot of anger in South Korea towards the U.S. on this crisis. And while there have been reports that Samsung had acted quickly to the crisis and that they cared about trust over profits, the fact is that Samsung hasn't reacted well to this crisis in North America at all. More importantly, they haven't followed U.S. legal safety regulations and procedures while continually dragging this recall out extensively for unknown reasons. While most Samsung fans don't seem to be phased by this crisis, not all Samsung customers in North America are happy over how this crisis is being handled, especially those in business.

The Wall Street Journal (WSJ) notes in a new report that "The ordeal is entering its third week with no clear resolution in sight, denting Samsung's credibility with longtime customers such as Michael Lees, 51, of Wallingford, Penn. who said that they want you to return your phone, but that's just not an option for me.' Mr. Lees uses his smartphone to manage an equipment database for a packaging company. Samsung has offered loaner phones, but Mr. Lees said he would have to invest 'a week of time getting that ready, and then I'm going to get a replacement phone and have to set that up again.'

Experts in recalls and crisis management told the WSJ that Samsung has made things worse with missteps that confused customers and delayed efforts to provide replacements. The huge recall of Samsung's Galaxy Note 7 has been dogged by conflicting information and by an apparent failure to coordinate efforts with the U.S. Product Safety Commission, according to former officials with that agency.

In announcing the recall, however, the experts added that Samsung appears to have neglected to first alert the U.S. Consumer Product Safety Commission, which by law must be notified within 24 hours after a safety risk has been identified. Recall announcements are generally then carried out jointly with the CPSC.

Neither Samsung nor the CPSC would say when the agency was first contacted. But the CPSC didn't issue a statement until Sept. 9, a week after the initial announcement. At that point, the CPSC urged consumers to stop using the Galaxy Note 7 immediately.

Patently Apple noted and applauded the Consumers Report Organization's important report made public on September 5. Consumer Reports discovered that despite a halt in sales from Samsung, some retailers were still offering the phone for sale. The report further noted that a full recall under CPSC would require the return of all smartphones sold and an immediate halt of sales from all retail outlets, not just from the manufacturer. That clearly didn't happen as noted earlier in the WSJ report.

Pamela Gilbert, a partner with Washington's Cuneo Gilbert & LaDuca LLP and a former executive director of the CPSC stated for the record that 'This is completely unusual; companies just don't issue recalls without the CPSC.' The gap between Samsung's announcement and the CPSC directive 'shouldn't have happened that way at all.'

As of this morning, the CPSC and Samsung hadn't issued a formal U.S. recall. The delay stems from questions over the precise problem with the phones and how best to correct it, according to a person working for a major U.S. carrier with knowledge of the situation.

'We are working as hard as we can and as fast as we can to announce an official recall in conjunction with Samsung,' a CPSC official said this week.

Even so, Samsung's message to consumers has been unclear in other ways, especially in the U.S. market, where it is trying to expand. Samsung is the world's biggest smartphone maker by shipments, but in the U.S. it is No. 2, after Apple.

In an initial statement on its U.S. website on Sept. 2, Samsung said there were battery issues with the phone but didn't detail the problem, nor did it advise customers to turn off their phones. It also said owners could exchange their phones as early as that week.

A week later, Samsung revised the release, advising people to turn off their phones and saying exchanges would be available 'pending CPSC approval.'

Adding to the confusion, some customers say they have been given contradictory information when they seek to exchange their devices.

In South Korea, Samsung is putting out a software update that limits how much users can charge the Galaxy Note 7 smartphone—a bid to reduce the risk of the phones catching fire by limiting the maximum battery charge to 60%. Patently Apple reported on their fix yesterday.

But according to the WSJ, "the software update won't be available in the U.S. amid the company's continuing negotiations with federal officials on a resolution. That leaves consumers wondering when Samsung will straighten things out."