Yesterday Apple launched their new stunning ceramic embodied Apple Watch Edition as note in our cover graphic. In yesterday's report covering the Apple Event I pointed to Apple's work with hardened ceramic using Zirconia. Apple had previously used zirconia, a type of ceramic for the bottom of the original Apple Watch. We pointed to Apple's patent that covering the process in creating that hybrid material. Today, a secondary patent came to light titled "Co-Molded Ceramic and Polymer Structure."

Apple's patent FIG. 3 is an Apple Watch that is described as using ceramic for the top, the bottom or both sides. 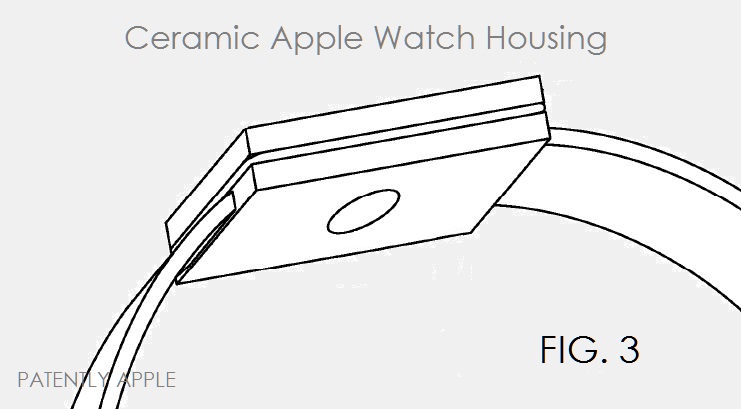 In Apple's latest patent concerning the use of ceramic for the Apple Watch housing, they discuss another possible hybrid using a polymer. For example, Apple notes that "a smartwatch (such as that shown and described with reference to FIG. 3) may include watch straps coupled to the housing via one or more strap attachment structures. While the watch housing may be formed (at least in part) from ceramic material, it may be beneficial to form the strap attachment structures from a polymer material."

How about the Future Stunning Ceramic iPhone?

An interesting twist to this patent filing is that the same ceramic to make the Apple Watch could in fact be used to create a future iPhone. Yes, the patent states that products other than the Apple could use this new ceramic material such as a MacBook (laptop), a biometric sensor, a health monitoring device, other wearable electronic devices, the iPad (tablet) and finally the iPhone (smartphone).

The interesting twist is that ceramic, especially when it is part of a hybrid mixture could be considered a form of glass. Wiki notes that "The crystallinity of ceramic materials ranges from highly oriented to semi-crystalline, and often completely amorphous (e.g., glasses). With the anniversary iPhone rumored to be glass, I have to wonder aloud if Apple's description of this new ceramic, described as "stunning ceramic" by Apple, is the rumored glass for the anniversary iPhone.

Whether it is the future glass iPhone or not, this patent is not only focused on using the new glass-like material in a future iPhone, it's also a patent that describes an all-new method of manufacturing an iPhone in a highly unique two-part body to make it truly waterproof and not merely water resistant.

In some embodiments, the seal seals a gap between the first and second housing portions. The seal may serve to prevent or limit debris, moisture, air, or other material from entering and/or escaping the interior of the housing. 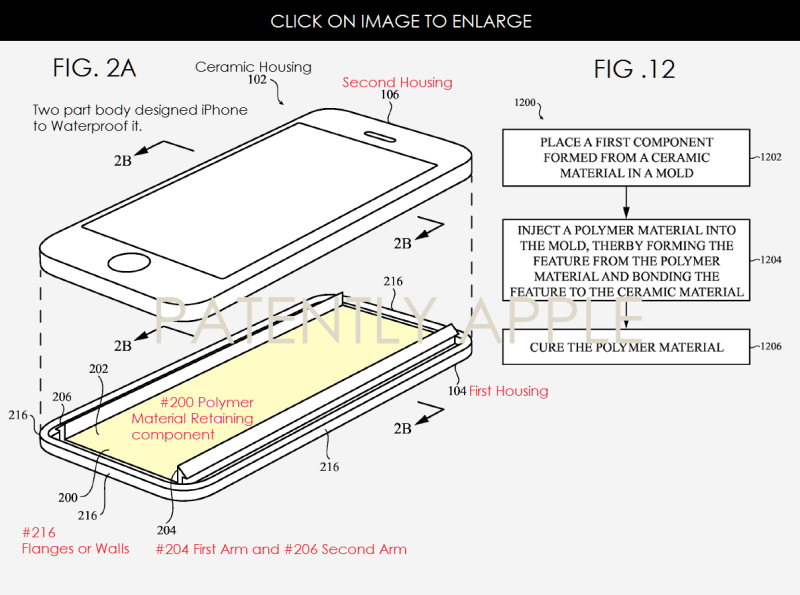 Apple further notes that FIG. 2A depicts an exploded perspective view of the housing for an electronic device, showing the second portion #106 separated from the first housing portion #104. In some embodiments, the first housing portion is a shell forming a cavity. The cavity may be defined by a first surface of the ceramic shell and one or more flanges or walls (e.g., walls #216) at an outer periphery of the first surface.

In some embodiments, a method for manufacturing a housing component for an electronic device includes placing a first component formed from a ceramic material in a mold. The mold may include a first section defining a first cavity configured to receive the first component, and a second section defining a second cavity that is in communication with the first cavity when the mold is closed, and is in the shape of a feature that is to be joined to the ceramic material.