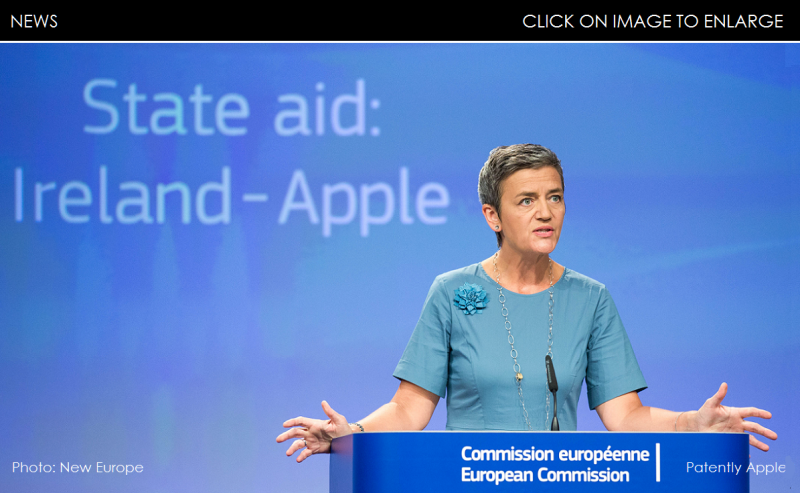 Yesterday Reuters reported that "If the Independent Alliance refused to back an appeal and pulled out of government, Fine Gael would no longer have sufficient support in parliament to pass legislation and the government could collapse." Seeing a little weakness from the Irish government, Apple's CEO warned late yesterday "that if the Dublin government did not join it in appealing, this would send the wrong message to business in a country whose economic model depends in part on companies like his," reports Reuters in a follow-up report today.

Ireland's response to the crisis was quick. AccorDing to Reuters, "Ireland's cabinet agreed on Friday to join Apple in appealing against a multi-billion-euro back tax demand that the European Commission has slapped on the iPhone maker, despite misgivings among independents who back the fragile coalition.

A government spokesman said that following the cabinet's decision, it would ask parliament to endorse the legal challenge on Wednesday next week.

Finance Minister Michael Noonan has insisted Dublin would fight any adverse ruling ever since the European Union began investigating the U.S. tech giant's Irish tax affairs in 2014, arguing that it had to protect a tax regime that has attracted large numbers of multinational employers.

But at an earlier cabinet meeting on Wednesday he failed to persuade a group of independent lawmakers, whose support is vital for the minority government, to agree to fight the ruling that Apple must pay up to 13 billion euros ($14.5 billion) in tax to Dublin.

Yesterday Apple's CEO Tim Cook took to an Irish radio showing stating that "Ireland and Apple have acted not only in the law, but did what was right. I'm convinced that would be crystal clear to anyone looking at this from an unbiased point of view."

Cook didn't stop there, he also questioned the numbers used at the EU Commission case. Vestager responded that "The figures we used in our decision were figures we got from Apple themselves and from the 2011 US hearings.Very little if any figures were in the public domain," she said. That is the only way the EU Commission is able to support cases that could be defended in court.

In a New Europe report published today they noted that the EU Competition Commissioner, Margrethe Vestager fired back at Tim Cook's accusations.

"This is a decision based on the facts of the case, looking into the sales of Apple International and its arrangements in Ireland," said the Commissioner, suggesting that the decision was made solely by tax criteria. "It is not a political act, it is a tax move," clarified Vestager, answering to Cook's allegations on Irish RTE radio, that EU Commission's Tuesday decision is both politically based and invalid.

Vestager sarcastically added that "We always have the courts to keep us in a straight line based on facts. The court won't hear political feelings, what's in your stomach. It wants the facts."

So, why doesn't the EU Commission publish the whole decision? "Right now the ball is in the hands of Apple and Ireland," comments the Commissioner. "I hope they will be as open and fast as possible for us to be able to publish the decision."

Wow, and this is just the opening salvo between Apple and the EU Commission on the verdict in Apple's case. The fireworks have only begun and it's bound to be an issue that will be fought bitterly by both sides in an effort to save their reputations. After Brexit, the EU needs a big win to gain face while Apple doesn't want their reputation tarnished as a tax evader that purposely slid under the law. Stay tuned, there's going to be many twists and turns before this is finally over.