Home Archives Contact Us Subscribe Twitter MeWe Facebook Patently Mobile
The iPhone 6s Remained the Top Smartphone in the U.S. in July while the iPhone SE Rang in at Number Three
News of Apple Pay working with Sony's FeliCa Technology in Japan Resurfaces

Prior to the Apple Watch 2 debuting, Apple's once leading market share position in the wearables sector has crashed, according to IDC. But has it really? We reported in July that the Apple Watch remained the number one smartwatch in the world with 47% market share. That particular statistic also came from IDC. So which is it? Are they winning or losing? Well, the minute the focus of IDC's stats moves away from smartwatches specifically into the realm of basic "wearables" in general, Apple's position crashes – only because they don't participate in the $20 fitness band market that has propelled Xiaomi ahead of Apple this quarter. If it was based on profit or revenue, Apple would likely crush everyone, but when the stats blur the lines between basic wearables and expensive smartwatches, the rock bottom priced basic fitness bands kill the whole category. At this point in time, IDC should keep the two distinctly different categories separate so that the statistics have meaning. At present, these stats only serve as a propaganda tool against Apple. 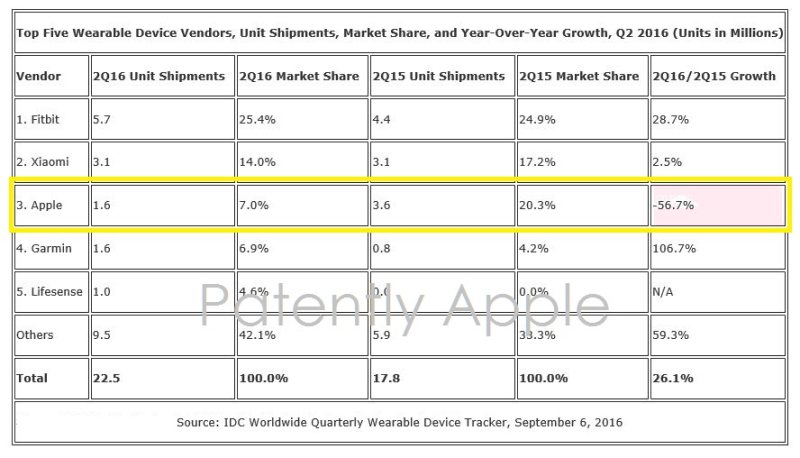 IDC reports today that shipments of wearable devices reached 22.5 million in the second quarter of 2016 (2Q16). The report noted that "Despite a decline in shipments for one of the largest vendors, the overall market for wearable devices grew 26.1% year over year as new use cases are slowly starting to emerge."

According to Jitesh Ubrani, senior research analyst for IDC Mobile Device Trackers, "Fitness is the low-hanging fruit for wearables. However, the market is evolving and we're starting to see consumers adopt new functionality, such as communication and mobile payments, while enterprises warm to wearables' productivity potential."

While the overall wearables market grew during 2Q16, its two categories traveled at different speeds and directions.

"Basic wearables, which include most fitness trackers, have benefited from a combination of factors: a clear value proposition for end-users, an abundant selection of devices from multiple vendors, and affordable price points," said Ramon Llamas, research manager, Wearables.

"Consequently, basic wearables accounted for 82.8% of all wearable devices shipped during the quarter, and more vendors continue to enter this space. The danger, however, is that most devices end up being copycats of others, making it increasingly difficult to differentiate themselves in a crowded market." And of course in a crowed market, where's the profits in pushing $20 bands?

"Smart wearables, meanwhile, are still struggling to find their place in the market," added Llamas. "There is plenty of curiosity about what smart wearables – particularly smartwatches – can do, but they have yet to convince users that they are a must-have item. The good news is that smart wearables are still in their initial stages and vendors are slowly making strides to improve them. But this also means that it will be a slow transition from basic wearables to smart wearables."

Apple's next-gen Apple Watch 2 is likely to spark the negative stats back to being positive. However, it will likely take independent telephony to make the Apple Watch a much bigger hit on the market than it currently is. Reportedly Apple has pushed back that feature until sometime in the future.