The U.S. Patent and Trademark Office officially published a series of 45 newly granted patents for Apple Inc. today. In this particular report we Apple's invention that automatically adjusts a user's iPhone volume depending if in a noisy or quite environment. The patent also covers a future iPhone supporting virtual volume controls on the side of the smartphone which also supports recent rumors about the 2017 iPhone.

Apple notes that when using electronic devices in the speakerphone mode or a headset, the environmental noise may greatly affect the desired volume that the user wishes to play the audio from the speakers or the headset. For example: when a user goes from a quiet room (e.g., library) to a loud environment (e.g., a concert), the user may need to increase the device's volume level.

In other embodiment, the processor identifies a sound profile that corresponds to the ambient noise level being detected and adjusts the user volume input range to a different portion of the global volume range based on the identified sound profile. 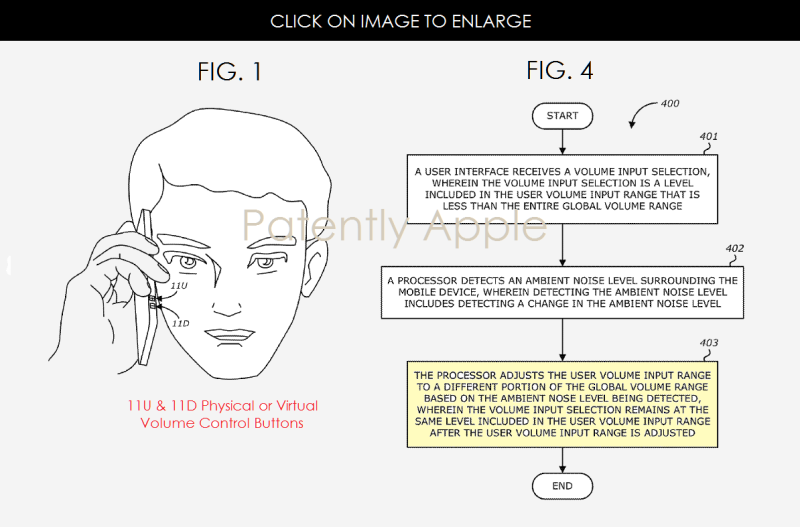 Another aspect of the patent covers the volume adjustment buttons on a future iPhone being virtual buttons instead of physical. Apple notes that the "Device may also include one or more physical buttons that may be used to receive a volume selection input from the user." The virtual buttons are shown in FIG. 1 above as 11u and 11d, for volume Up and Down.

This is a feature that is that has been presented in other Apple patents relating  to a future glass encased iPhone with a wraparound display. One such design was granted today and another one supporting this feature could be found here.

Apple's granted patent 9,438,194 was originally filed in Q3 2014 and published today by the US Patent and Trademark Office.