Apple is number one on the new J.D. Power 2016 Streaming Music Satisfaction Study. The study's findings will no doubt anger Spotify fans. According to the study, Apple Music ranked the highest among the streaming music brands included in the study, with an overall score of 834. Apple leads with the highest score in three of the six measures, performing particularly well in performance and reliability, content and ease of use. Surprisingly Rhapsody ranked second with an overall score of 826 and performed particularly well in the cost of service and communication measures. 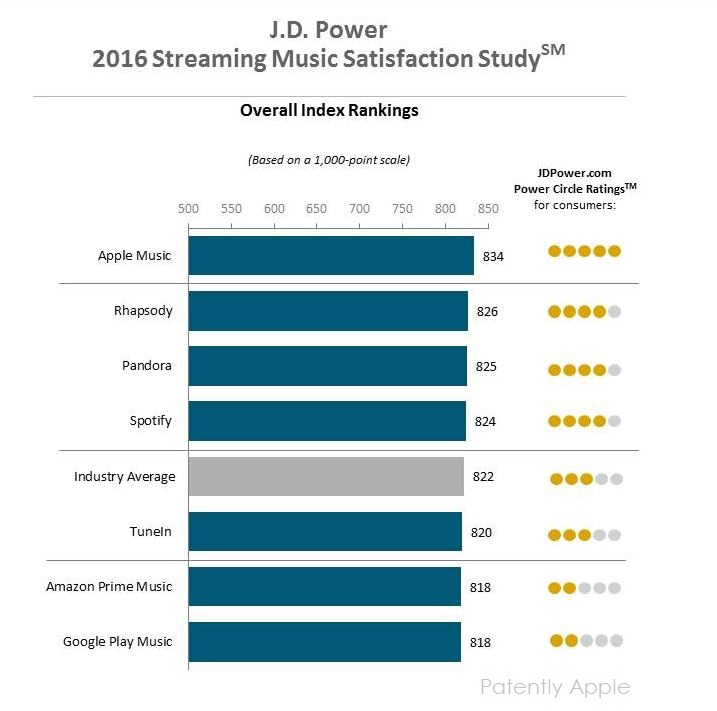 The inaugural study measures overall satisfaction among customers who have used a subscription-based streaming music service within the past six months. Customer satisfaction is examined across six key measures (listed in order of importance): performance and reliability; ease of use; cost of service; content; communication; and customer service. Scores for each measure are reflected in an index based on a 1,000-point scale.

The study finds that satisfaction with paid streaming music service is impacted by the level of engagement with listening to and sharing playlists and content with others. There are four distinct listener profiles. The largest segment is passive listeners (customers who neither share their own content/playlists nor consume other users' content), representing 44% of the total music streaming universe

The next segment accounts for 29% and are considered fully engaged listeners; 22% are followers (customers who consume other users' content/playlists but do not share their own); and 5% are sharers (customers who say they "always" or "sometimes" share their own playlists but do not consume other users' content).

Kirk Parsons, senior director and technology, media & telecom practice leader at J.D. Power stated in the press release that "The streaming music customer experience appears to be affected by a number of dimensions, including paid vs. free streaming, device choice and content selection. The key to success, however, is increasingly becoming how well streaming music brands create a viable music ecosystem that can not only support multiple types of devices, but also facilitate listeners' social sharing and following of playlists with others."

Satisfaction Lowest among Passive Listeners: As levels of engagement and contribution to a streaming community rise, so does satisfaction. Overall satisfaction is lowest among passive listeners (801), followed closely by the followers (812), while satisfaction is highest among fully engaged listeners (860) and sharers (833). Satisfaction in all measures is lower among customers who are not engaged than among those who are, with an especially wide gap between the two segments in the communication (79-point gap) and cost of service (72-point gap) measures.

Exclusive Content Improves Customer Advocacy: Among customers who listen to content released exclusively on their streaming service, overall satisfaction is 52 points higher than among those who do not, and content satisfaction is 59 points higher. Nearly three-fourths (74%) of customers who listen to exclusive content say they 'definitely will' recommend their provider vs. 54% of those who do not who say the same.

And lastly, Peripheral Devices Enhance the Listening Experience: Overall satisfaction is higher among customers who use a peripheral device to stream music than among those who do not. Several devices that are not yet widely adopted have particularly high impacts on satisfaction: smartwatches (+57 points); home automation controllers (+50); and virtual reality viewers (+48). Bluetooth speakers, which are more widely used, also have a considerable effect (+23).

As a side note, even though Universal has committed to ending exclusive content with Apple, Apple Music's Jimmy Iovine has stated for the record "that Apple Music would move forward with its pursuit of exclusives from other partners, such as Sony Music Entertainment and the Warner Music Group, noting, "It's Apple's show. As long as Apple's asking me to do what I'm doing, I'm gonna keep doing it."

The 2016 Streaming Music Satisfaction Study is based on responses from 4,482 customers. The study was fielded in June and July 2016.