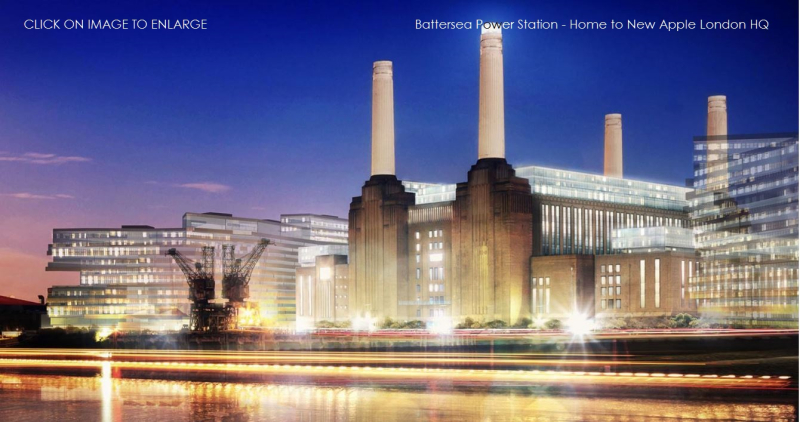 When the Irish government hesitated to call for a vote to appeal the EU's tax ruling against Apple, CEO Tim Cook took the Irish airwaves to say that "if the Dublin government did not join it in appealing, this would send the wrong message to business in a country whose economic model depends in part on companies like his." The very next day the Irish government called for a vote and got it passed. Yet let it be known that the Irish opposition party Sinn Fein agressively attacked Apple's tax ruling appeal and remained furious that the cabinet decided to appeal the EU's decision. Sinn Fein leader Gerry Adams said in parliament that 'We want companies like Apple in Ireland… but this doesn't mean one should turn a blind eye to tax evasion or avoidance.' Sinn Fein finance spokesman Pearse Doherty said Apple had operated 'a sort of untaxed Bermuda Triangle' in Ireland following opinion polls that have shown majorities in favor of Apple paying the back taxes.'" Just before the fireworks began, Downing Street welcomed Apple to come to the UK.

It was reported by the UK's Independent that "Downing Street has signaled it would "welcome any company" to the UK, just hours after an unprecedented EU tax-decision left a question mark over Apple's future in Ireland." The report later noted that "Theresa May's Government may turn post-Brexit Britain into a tax haven for multi-national corporations." Swedish Prime Minister Stefan Lofven previously warned Britain against 'aggressiveness' in slashing corporate tax cuts during Brexit talks.

Fast forward about 30 days and it's being reported by the EveningStandard in the UK that Apple is to create a stunning London HQ at Battersea Power Station. The report noted that Apple is to create a spectacular new London headquarters at Battersea Power Station in a massive coup for the developers behind the £9 billion project.

Apple will move some 1,400 staff in London from eight sites under one roof in the new location. While the UK's EveningStandard has called it Apple's new Head Quarters, Apple is politically side stepping around that by officially describing it as "a new Apple Campus," knowing that Apple's European HQ remains in Cork, Ireland (for now, at least).

Its employees will occupy all six floors of office space in the brick "cathedral of power", which is being painstakingly restored after 33 years standing derelict on the banks of the Thames.

In a statement to the Standard, Apple said it was looking forward to the 2021 opening of 'our new London campus' as staff relocate to "this magnificent new development at one of the city's best-known landmarks.' It added: 'This is a great opportunity to have our entire team working and collaborating in one location while supporting the renovation of a neighborhood rich with history.'"

Though it should be noted that the Battersea site will actually be one of its biggest Apple facilities in the world outside America. The Californian giant, the world's most valuable company, will be the largest single tenant in the 42-acre complex of homes, offices, shops and leisure facilities.

Apple is leasing 500,000 sq ft in total, making it one of the biggest single office deals signed in London outside the City and Docklands in the past 20 years.

Chancellor Philip Hammond said: "Apple's decision further strengthens London's position as a global technology hub and demonstrates how the UK is at the forefront of the next steps in the tech revolution. It's another vote of confidence in the UK economy."

As a side note, Pink Floyd fans should remember that the Battersea Power Plant was on the cover of the album "Animals." Being that they're one of my favorite bands of all times, I couldn't resist sneaking that in.

Earlier in the report it was noted that Apple's new facility at the Battersea Power Station was a massive coup for the developers behind the £9 billion project. So what project is that? It's a WilkinsonEyre project. WilkinsonEyre was appointed in 2013 for the refurbishment of the iconic Grade II listed Battersea Power Station. The proposed designs are consistent with and sympathetic to Sir Giles Gilbert Scott's masterpiece, with the chimneys and turbine halls remaining the dominant features of the building.

Retaining the power station's sense of scale and visual drama is key to the project. Large volume spaces expose the historic fabric internally and juxtapose new and old construction. The Turbine Halls are the principal grand spaces and they are bought back to life through new uses. Our cover graphic is showing the old facility with portions of the new facility plans superimposed. Below are some of the conceptual drawings of the new facility that will house Apple's new campus. 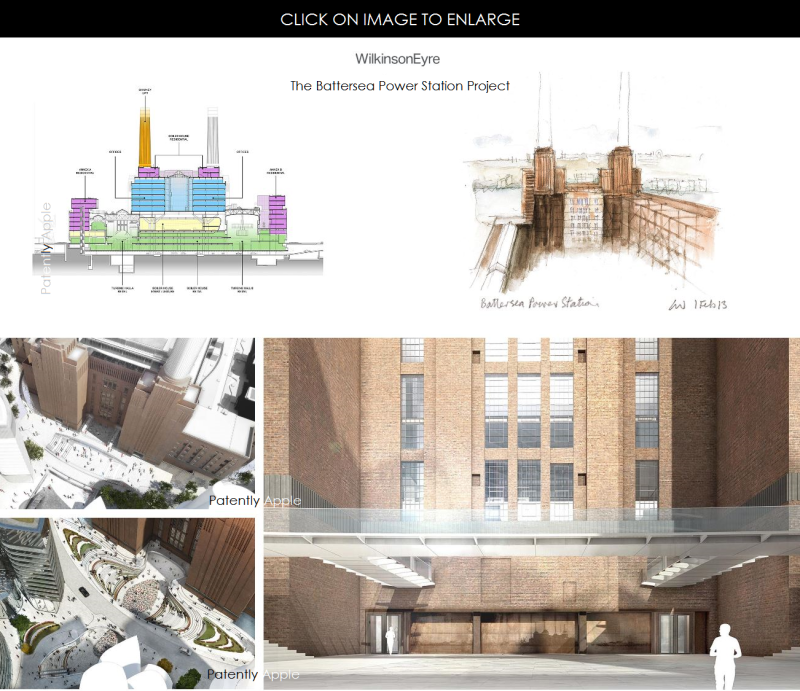 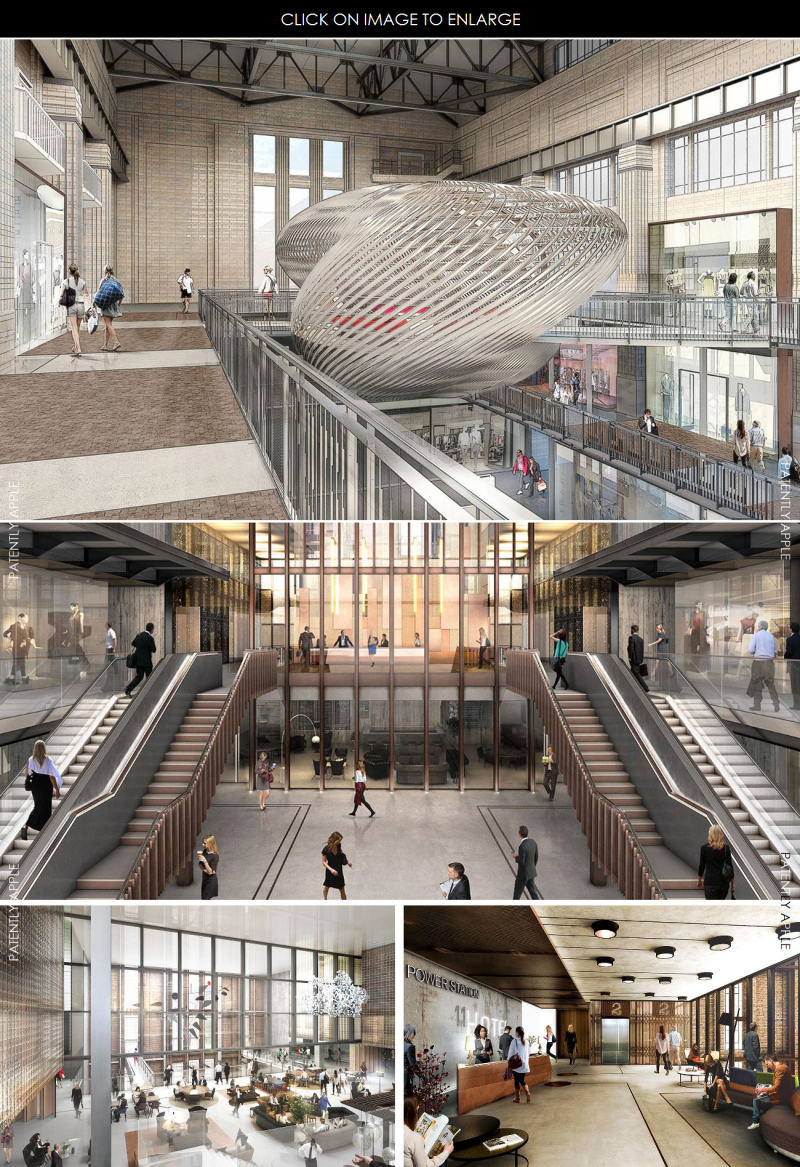 At the end of the day, while Cork Ireland is Apple's current European Headquarters, it's good to know that Apple is opening a stunning new campus in London in 2021. By that time we should know how Apple's appeal on their taxes turns out. And should it not go Apple's way, oh well, there's always the Battersea Power Plant that they could use as a new Headquarters. Of course for now, it's just a "campus" that happens to be the largest Apple facility outside of the U.S. 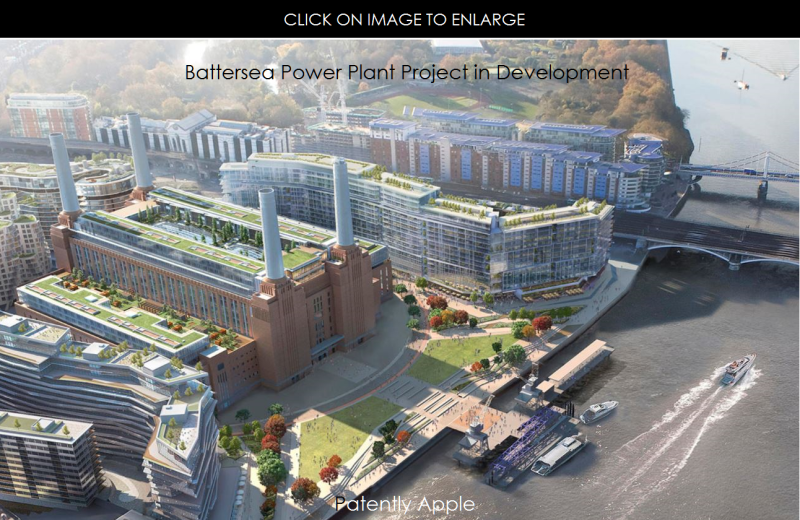