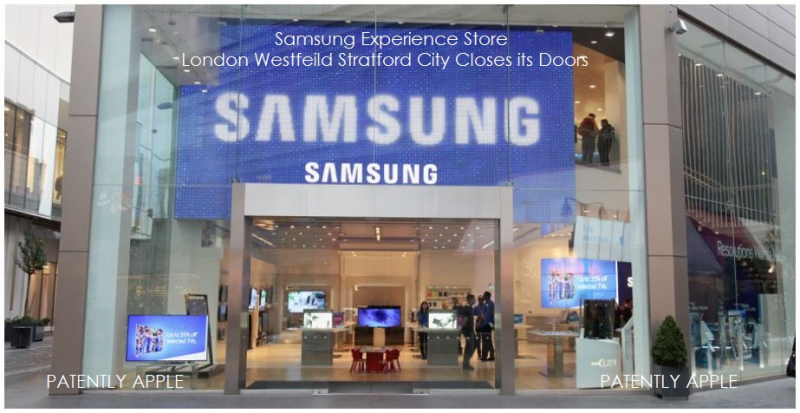 In the Apple vs. Samsung trial Apple pointed to Samsung 'slavishly copying' the iPhone. This week we posted a report titled "Samsung Caught Using Apple Watch Design Figures in a Recent Patent Filing." Not that it's against the law, unless they actually sell an identical product, that is, but simply including Apple drawings of the Apple Watch in an IP filing shows their engineering madness of wanting to copy and/or beat Apple at everything they make. In business Lee Iaccoca once said "lead, follow or get out of the way." In many cases Samsung is seen as the great copycat, a great follower. This week we learned about Samsung's next generation retail store in Manhatten that is out to copy the Apple Store experience.

In December 2014 we posted a report titled "Samsung's Flagship Store in London Closes, Can't Match the Apple Store Experience." In that report we noted a Twitter user that first noticed the Samsung Store closure, Najeeb Khan, who stated to the press that the store "never came close to" the ambience of Apple's shops with respect to "buying experience, staff knowledge" and so on.

Well, since that time Samsung went back to the drawing board to figure out how to create an ambience that is found in Apple Stores and try to match that buying experience.

Earlier this year Samsung introduced the 'Samsung 837' marketing center in Manhatten. It was highlighted this week in a new Korean report after the New York event that introduced the new Galaxy Note 7.

Samsung 837's tech support manager, Kim Jin-ho, stated for the Korean report that "As electronic devices became more complicated, consumers have asked for more extensive services, not just repairs but also instructions on how to use the gadgets. Such a concierge-like customer care center has first opened in Manhattan and we are seeing more than a thousand visitors every month since the opening. Most of the visitors to the customer-care corner seek instructions for their device."

Yes of course a concierge service …. Like the one Apple Stores offer. As part of the Genius Bar, now converting to the Genius Grove, Apple has been there with such services from day one and Apple has offered courses on how to use products early on.

So Samsung is doing what? Yes, realizing that that their stores have to be more Apple-like with services that match Apple's as well and away from the Sony Store-styled experience that is more like a dead barn of products. But of course Samsung fans will see this as all just coincidental.

Yet what I respect about Samsung as a competitor is that they don't give up like most. They fail, and fail miserably, but get right back up and prepare for a new fight with a new approach. This is good for Apple so as to keep them on their toes.

While Apple is also reinventing their Apple Stores, Samsung has taken a unique twist that Apple should consider for future flagship stores as noted below: A mini theatre for presentations and events (click on images to enlarge).

The last image is about covering the Rio Olympics at their 837 store to bring customers a live experience which is an interesting twist. You could learn more about that here.

In the end, Apple's late Steve Jobs had the courage, conviction and vision to reinvent the computer store experience back in 2001 from top to bottom at a time when computer stores like Gateway had failed spectacularly. The experience found at Apple Stores today is found nowhere else on the planet. Apple paved the way through innovating service. They didn't copy a competitor like most try to do today.

Microsoft and Samsung now seeing Apple's shining success are drawn, no compelled, to try and mimic the Apple Store – but just haven't been able to match the experience, because in part, its about the Apple culture. That's what gives the stores its vibrancy. That's why you can't match hardware like table and stools and expect to match the same success. That's why many competing stores hardly show a pulse and Samsung's, as we noted at the top of the story, failed in a very popular high traffic area for being lifeless.

Although one successful store does not a trend make for Samsung, their new Samsung 837 concept of the mini theater may have found a little something worth noting that one day may land in competing computer stores in one way or another. In fact, Apple introduced "The Plaza" in May, which sounds like it holds the same potential. So keep an eye out for it in future flagship stores coming to a city near you.