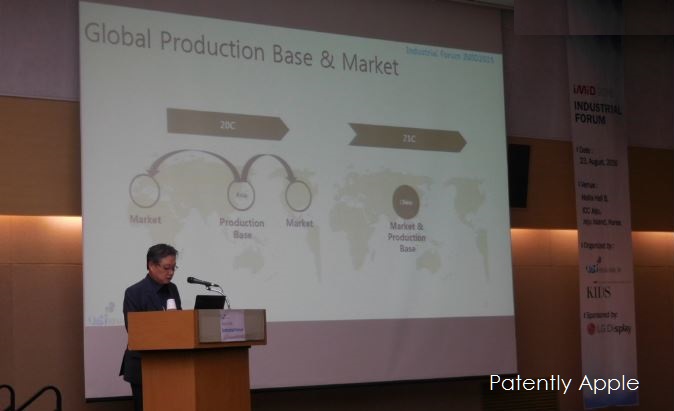 In July we posted a report titled "Apple Supplier LG Racing to Develop Foldable Displays for Future Smartphones and Tablets," wherein we noted Peter Monsberger, CEO of IGNIS Innovation stating that "People are going to witness foldable Smartphones that can become tablets when they are spread open within a couple years." Yes, "In a couple of years you are going to be into a foldable smartphone, so you can open it up and it will be the size of a tablet, then you can fold it back up and it fits in your pocket. We are in the midst of all that."

LG has already licenced the technology to make that happen and Samsung, who now has more than a dozen patents on such devices, has already stated that they'll have a foldable/bendable smartphone in the next 18-24 months. Even Apple filed a secret foldable smartphone patent in Korea back in 2014.

As noted in our cover graphic, late last week a leading Korean OLED Display analyst UBI Research gave a presentation on the subject of the foldable smartphone/tablet hybrid.

The President of UBI Research 'Flexible OLED made a presentation at the New Digital Convergence conference. His presentation was about combining a smartphone and tablet PC with a flexible OLED. According to Choong Hoon Yi, such a device will play a key role in opening the new digital convergence era.

Yi discussed diverse applications for flexible OLED and emphasized that digital convergence where tablet PC is absorbed into smartphone will occur. He explained that flexible OLED will open the foldable phone era where the screen can be completely folded, and innovative product which will become a 5 inch smartphone when folded and a tablet PC when opened will be developed.

Yi explained that using the flexible OLED's characteristics of thinness, lightness, flexibility, and spatial efficiency, it will be widely used. He estimated that not only will flexible OLED be used in automotive screen, lighting, flexible signage, and foldable game device, it will be utilized in diverse areas from wearable products such as smart helmet to smart fashion.

Although Apple was late to the Phablet market, they certainly killed their competitors in short order when they finally launched their amazing iPhone 6-Plus in 2014. Over the next year or two Phablets will be pushing single smartphone display sizes towards 6" and 6.5." Apple, on the other hand, has been rumored to be considering a 5.7" display for their 2017 iPhone Plus model.

So it's highly doubtful that we'll be seeing Apple lead the market into this next era of the foldable smartphone. And yet it sounds like a very exciting evolutionary direction for the market and hopefully over time batteries will become more powerful and componentry ever smaller to allow for a truly light and foldable device to arise that will support 5G, TV on the Go, Augmented Reality and so much more by 2021.

I know that Apple will follow this market closely as this new category of smartphone unfolds (pardon the pun) and I can't wait for such a device to become a reality. I jumped on the iPhone 6-Plus as soon as it launched and a foldable smartphone-tablet sound like a winner to me.

The bad news for Apple fans in the short run is that we'll have endure Samsung fans bragging about their breakthrough for a few years until Apple finally enters this market as their patent suggests is a real possibility.

Then again, first-to-market devices have rarely proven to be long term winners anyways. Samsung was first with the Gear smartwatch and Apple Watch killed it in its first quarter of existence on the market; Microsoft was first with a PC tablet and yet Apple's iPad killed it in volume in just its first quarter. So Samsung's bragging, thankfully, will be short lived. And – isn't it more fun to see the underdog winning in the end anyways?