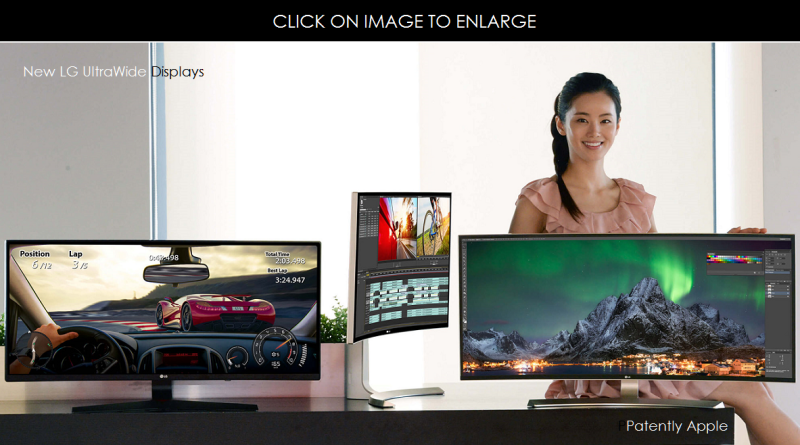 It was reported on Monday that Apple was working on a new standalone monitor to connect to its computers. After exiting the monitor business earlier this year with the discontinuation of the 27-inch Thunderbolt display, Apple is working with LG Electronics on a new monitor with a high-resolution "5K" screen, according to Bloomberg sources. Yesterday, LG announced that they'll be unveiling new UltraWide displays at the IFA trade show in Germany that starts on Friday. While Apple's new UltraWide displays will be customized for Apple, it's still interesting to see the standard specifications of the new LG displays to give us an idea as to what we could expect from Apple's new lineup.

As the first UltraWide™ monitor to feature a USB Type-C port, the 38UC99 offers a peek at the future of connectivity. The advanced port allows users to transmit content and data as well as charge another device such as a smartphone or laptop at the same time, all with single code helping eliminate clutter. The monitor also includes capabilities to customize display options with just a few clicks of the mouse and store customized color settings with the easy-to-use Onscreen Control software and My Display Preset.

And the 38UC99 is just as suitable for entertainment as it is for workplace efficiency. With two 10W built-in Bluetooth compatible speakers, the 38UC99 offers Rich Bass audio output in the 85Hz bass range. This impressive audio system improves the entire user experience with its deep, rich sound. The one millisecond Motion Blur Reduction feature streamlines gameplay by minimizing afterimages that often occur in fast-paced games.

The monitor also offers a crosshair option which adds a fixed target to the center of the screen to increase accuracy during FPS games and a mouse line hook to prevent drag resistance caused by the mouse's cable. With the monitor's curved shape and immersive 21:9 aspect ratio, the 34UC79G presents a world-class gaming experience for fans of FPS, RTS or MMORPG.

34UC79G also includes a number of practical design features fit well into gaming station setup without hindering gaming such as tilting, adjusting the height and the mouse line hook which minimizes tangled cords.

'With tablets and smartphones at their disposal, consumers today don't feel shackled to their desks anymore so it's more important than ever that their monitors offer additional user benefits and conveniences,' said Brian Kwon, president of LG Home Entertainment Company. 'LG is the number one brand in the 21:9 monitor space because we were first to recognize that consumers are adopting a new way of working and playing that put them ahead of the competition whether that's working or playing.'"

With these size of displays, how much of an effort would it take for Apple to add in TV capabilities?