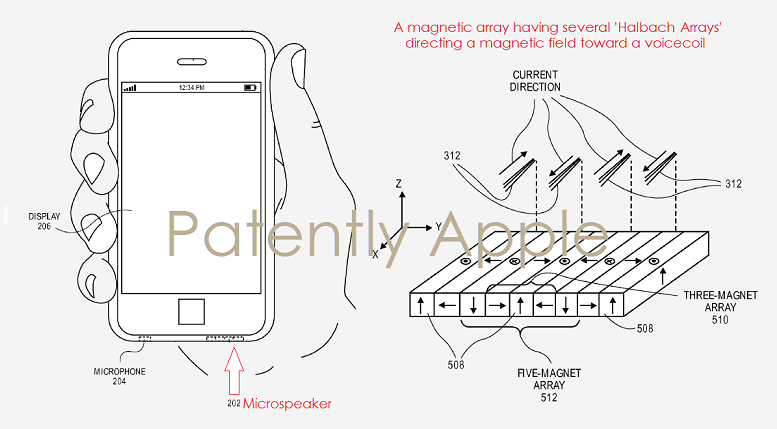 For Apple, making their devices lighter and thinner is an obsession and the lightest of their devices have often been given the 'Air' brand – as in the iPad Air or the MacBook Air. That's a quality trait that consumers want in their mobile devices and Apple is now working on reinventing their audio speakers for a wide range of products, with the iPhone being its main focus in their latest patent filing. To make the speakers ever thinner, Apple's Acoustical Specialist Alex Salvatti invented speakers using a Halbach Array audio transducer. Salvatti worked with JBL Professional as the Principle R&D Engineer for 15 years.

Salvatti notes that portable consumer electronics devices, such as mobile phones, have continued to become more and more compact. As the form factor of such devices shrinks, system enclosures become smaller and the space available for speaker integration is reduced. In Apple's patent FIG. 5B noted above we're able to see a sectional view shown in perspective of a magnetic array having several Halbach arrays directing a magnetic field toward a voicecoil.

Apple patent application 20160212546 was filed in Q3 2015. The patent filing doesn't spend any time trying to present a marketing case for this new speaker in plain English. The invention is strictly technical and could only be appreciated by audio engineers that are familiar with the terminology and processes of this field. But if you like a challenging read – then check-out Apple's patent filing titled "Halbach Array Audio Transducer" here. Considering that this is a patent application, the timing of such a product to market is unknown at this time.

Apple's engineer/inventor Alex Salvatti worked on another Apple invention that came to light earlier this month that we covered in a report titled "Apple Advances their Work on Waterproof Speakers."