In a USA Today report published yesterday, they noted that most consumers that they spoke to recently on Ocean Front Walk, Venice Beach California, said they would love to see a 100% waterproof iPhone – or at least as close to 100% like the new Samsung Galaxy Note 7 unveiled earlier this month. Better waterproofing is what we're likely to see when the iPhone 7 is unveiled in September if the rumors pan out – and today, the U.S. Patent and Trademark Office published yet another patent application from Apple that reveals another aspect of waterproofing related to ports. Even though the patent figures are aimed at the Apple Watch, Apple notes several times in their filing that their invention covers a wide range of their products including the iPhone (smartphone) and iPod (portable music player).

Many types of electronic devices, such as smart phones, gaming devices, computers, watches, and the like, may include ports or openings to allow transmission of sound waves or to receive connectors. Some examples of these types of ports include microphone ports, speaker apertures, and headphone ports. During operation, some types of ports, such as microphone ports and speaker ports, require air flow between the enclosure of the electronic device in order to receive and/or transmit sound waves. The airflow pathway may also allow fluids, such as water, and/or debris to enter into the enclosure, which may damage internal components. Therefore, there is a need for a port or aperture that may prevent fluid ingress while still allowing airflow during operation. 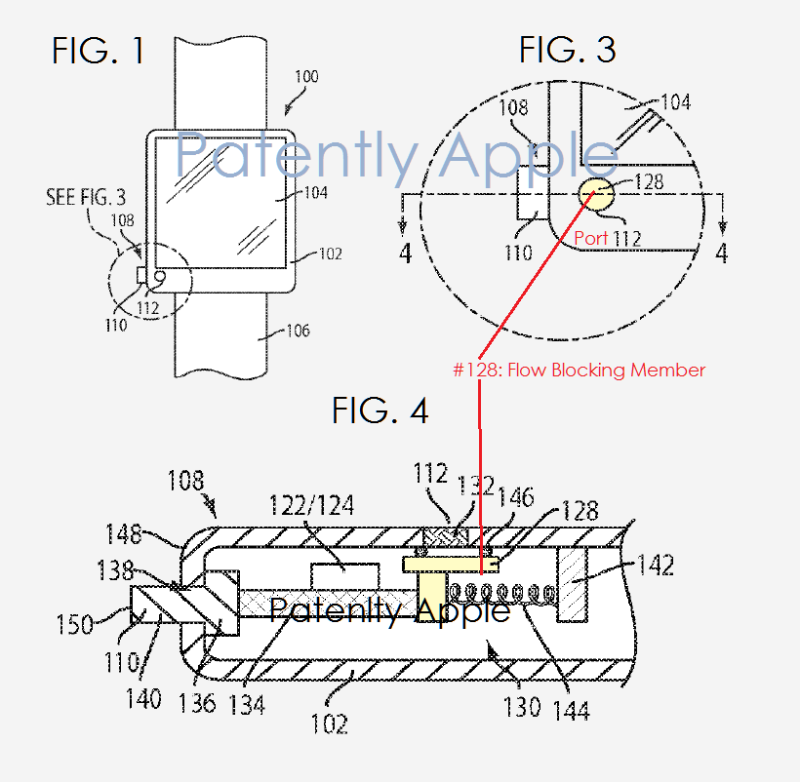 According to Apple's filing, future Apple devices could include a housing defining a port and a cavity, a processing element contained within the cavity of the housing, an input/output device (such as, but not limited to, a sound wave transducer) in selective communication with the port, and a flow-blocking member movably connected to the housing. The flow-blocking member selectively prevents fluid-flow, such as the flow of air, through the port. The electronic device also includes a fluid repelling member connected to the housing and positioned in a flow path between the port and the input/output device.

Another example in the filing includes the Apple Watch which could comprise an enclosure defining a cavity, a processing element at least partially enclosed within the cavity, and a flow aperture configured to be in selectively fluid communication with the cavity. The wearable electronic device also includes a button assembly operably connected to the enclosure and configured to selectively prevent fluid flow through the flow aperture and a sound wave transducer, such as a microphone or speaker, is positioned within the cavity and is in selective fluid communication with the flow aperture.

Yet another example of the disclosure includes a portable electronic device. The portable electronic device includes a housing defining a cavity, a port defined in the housing, the port being in fluid communication with the cavity, a sound wave transducer in selective communication with the port, and a waterproof port assembly operably connected to the housing. The waterproof port assembly comprises a selectable component movable connected to the housing and a flow-blocking member operably connected to the selectable component and selectively positioned between the port and the sound wave transducer. During operation, movement of the selectable component causes movement of the flow-blocking member.

Another Apple patent application that could be batched into this category today is a filing titled "Method for Clearing Water from an Acoustic Port and Membrane." In this invention, Apple describes placing a heating element in an acoustic port that could expedite the evaporation of liquids accumulated with a port. For more on this see Apple's patent application 20160241945 here. 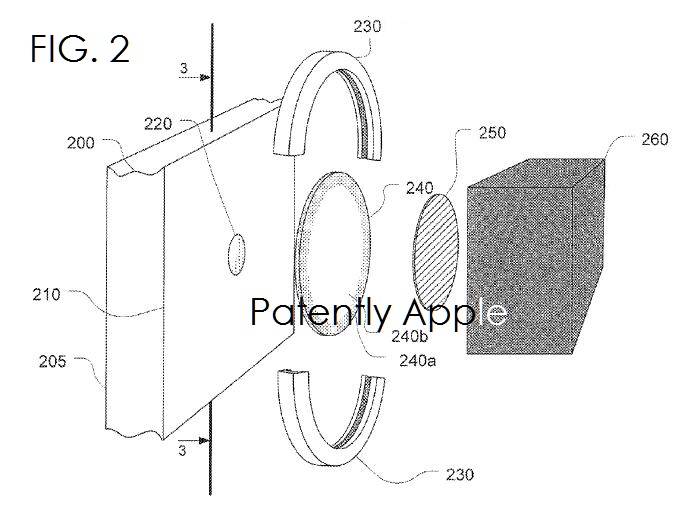 Apple's patent FIG. 2 noted above is an exploded cutaway view of an sample embodiment of an acoustic port having a heating element positioned behind an acoustic membrane.