Today, the U.S. Patent and Trademark Office published a patent application from Apple that generally relates to wireless communication between computing devices, and more particularly, in one example, to the selective enabling and disabling of a set of paired devices by having the user actively enable and disable one of the devices associated with the set of paired devices. As an example, when a user possesses multiple devices on their person and wants to set each and every device into an airplane mode (if they are traveling, for instance) it may become cumbersome and tedious to set each and every device individually to an airplane mode. Apple's new invention makes it simple. 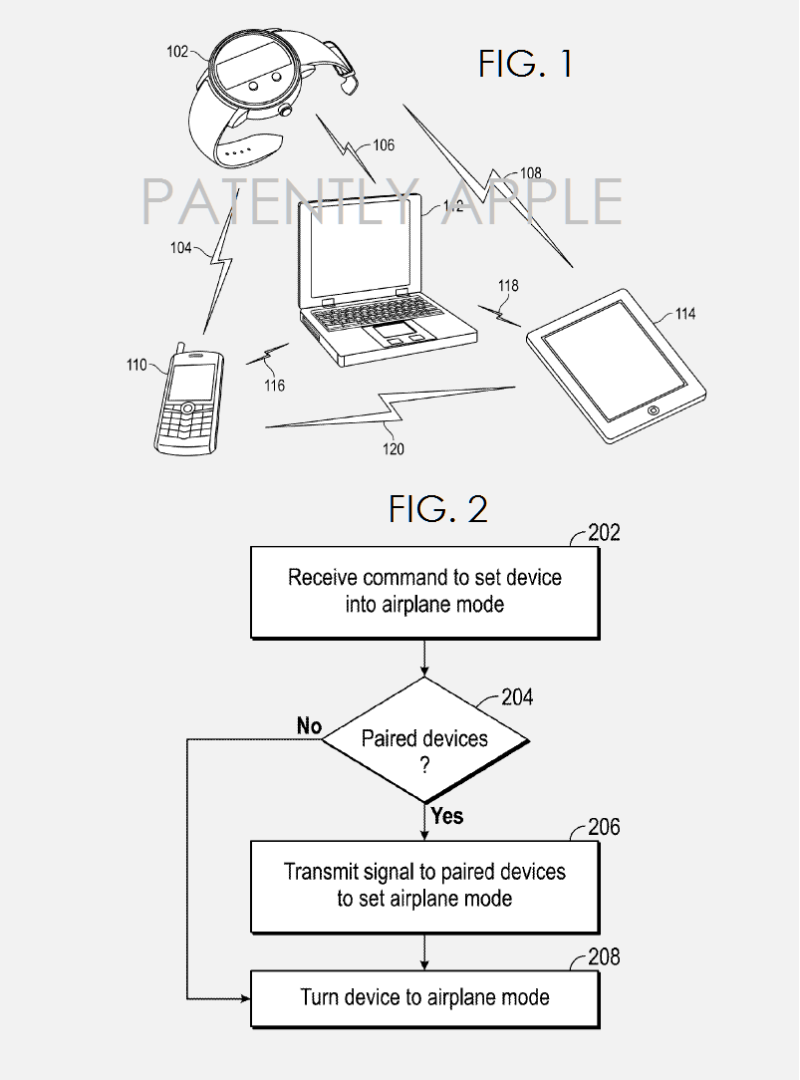 Air travelers today can carry multiple wireless devices wherever they may go. It is not uncommon to see a traveler with a phone, a tablet, and a laptop computer. Some also carry dedicated MP3 players (i.e. iPods) and other devices (i.e. watches, health monitors, etc.) that may be have wireless capability. During a flight, the airline may require that these wireless devices have their wireless capabilities disabled during the duration of the flight. One option an air traveler has is to completely power off each and every of their wireless devices. However in some scenarios, the user may wish to continue to use the devices while still shutting off the wireless functionality of the devices. One option an air traveler has is to put their wireless device into an airplane mode. "Airplane mode" is a setting on mobile phones and other wireless devices that, when engaged, disables operation of radio frequency (wireless) chipsets and antennas in the device. Airplane mode exists because airlines allow the use of electronics on airplanes, but not the use of their internal wireless transmitters. In order to be able to use the non-radio features of a mobile phone, music player, or other electronic device, airplane mode can be enabled. Otherwise, any device with an antenna needs to be turned off for the duration of a flight.

In one example, Apple notes that one or all of the devices in the travel set can listen to ambient noises and speech to determine that the airplane has landed. For instance, if the ambient noise falls below a certain threshold indicating that the engine of an airplane is no longer running, then the device can automatically deactivate airplane mode.

In another example, one or all of the devices can use speech recognition algorithms and listen for a particular phrase of speech such as a flight attendant announcing that "it is now safe to use your cellular phone." A voice recognition algorithm stored in the device can interpret the voice and determine the situation in which airplane mode can be safely switched off. This voice recognition method could also be used to activate airplane mode, for instance, when a flight attendant says "please turn of all electronics."