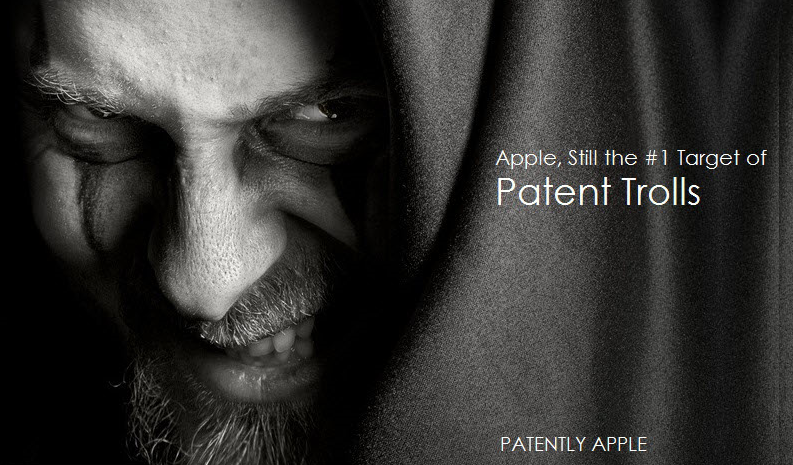 In July 2015 Patently Apple posted a report titled Apple Remains the Number One Target of Patent Trolls in 2015. The statistics showed that Apple, Actavis and Amazon were the most frequently sued, with Apple facing 25 patent suits in the first half of 2015 while Actavis and Amazon each faced 21 suits. Today there was a ruling from the US Supreme Court that will make life a little harder for patent trolls.

According to the Wall Street Journal, "The Supreme Court on Monday blessed new government procedures for challenging patents, a win for companies that argued the fledgling process was a better, more cost-effective way to weed weak patents out of the system.

The ruling is a blow for companies that favor strong patent protections, such as those in the pharmaceutical and biotechnology industry. It is a boost for technology companies like Alphabet's Google and Apple that have taken advantage of new procedures at the U.S. Patent and Trademark Office to challenge the validity of patents they believed made weak claims to new innovations.

The case focused on Patent Office regulations that implemented part of a 2011 congressional overhaul of the nation's patent system. Many supporters of the law argued there were too many questionable patents in the U.S. and it was too slow and expensive to challenge them in court.

The 2011 law created quicker and cheaper procedures for contesting patents in front of the Patent Office instead of in front of a federal judge. But some argued the procedures overcompensated and made patents too vulnerable. That is because the Patent Office adopted challenger-friendly legal standards that were different than those used in courts.

The Supreme Court acknowledged the Patent Office rules depart from those used in court, but said the agency had taken a reasonable approach.

Justice Stephen Breyer, writing the court's opinion, said the Patent Office approach "helps to protect the public" by preventing individuals and companies from claiming overly broad patents that "might discourage the use of the invention by a member of the public."

According to recent government data, trials completed so far in front of a Patent Office board have resulted in the cancellation of some or all of a patent more than 80% of the time.

Board proceedings have been a favored venue for tech companies, particularly those that are targets of lawsuits from patent assertion businesses. Those businesses—described as patent trolls by critics—don't make products but have patent portfolios from which they seek to profit from licensing fees and litigation. For more on this, read the full Wall Street Journal report here.