Apple is a 'Powder Keg' Waiting to Explode to the Upside

According to a new financial report this morning, "Cowen & Co.'s Timothy Arcuri reiterates an Outperform rating on shares of Apple (AAPL), and a $125 price target, writing that the company is a 'powder keg' waiting to go boom, in a good way, as regards the iPhone, and that 'it pays to get involved and wait it out.'

While estimates for this year are 'a smidge' too high, thinks Arcuri, 'a new analysis suggests we are on the cusp of huge growth in the portion of the iPhone base that is >2yrs old.'

If those older phone users don't buy a presumed 'iPhone 7' this fall, then they're going to contribute to big growth in 2017, he opines, when many expect Apple will introduce a more ambitious, exotic "form factor" for the phone:

Assuming iPhone 7/7+ units are about flat with iPhone 6S/6S+, the portion of the total active iPhone installed base that is >2yrs old is set to hockey-stick from ~33% today (a number that has been consistent for ~6Qs) to ~43% in the next 4-5Qs. This represents growth in >2yr old units of ~60-70MM by next June. Put a different way, we estimate the total current IB is growing ~70MM units Y/Y, but2yrs old. 4-5Qs from now though, Y/Y growth in the total base will have slowed to only ~45MM units but units that are >2yrs old will be growing ~60-70MM Y/Y. In other words, the entire growth of the base – and then some – will be from older units that are ripe for upgrades, especially to a new OLED-enabled form factor. Overall, these dynamics suggest that either 1) iPhone 7 units are better than feared, or 2) the super-cycle in C2017 will be even larger.

Arcuri offers several pictures to show the base of iPhones as a percentage of the total base and of growth in iPhone is reaching a 'knee in the curve.'" 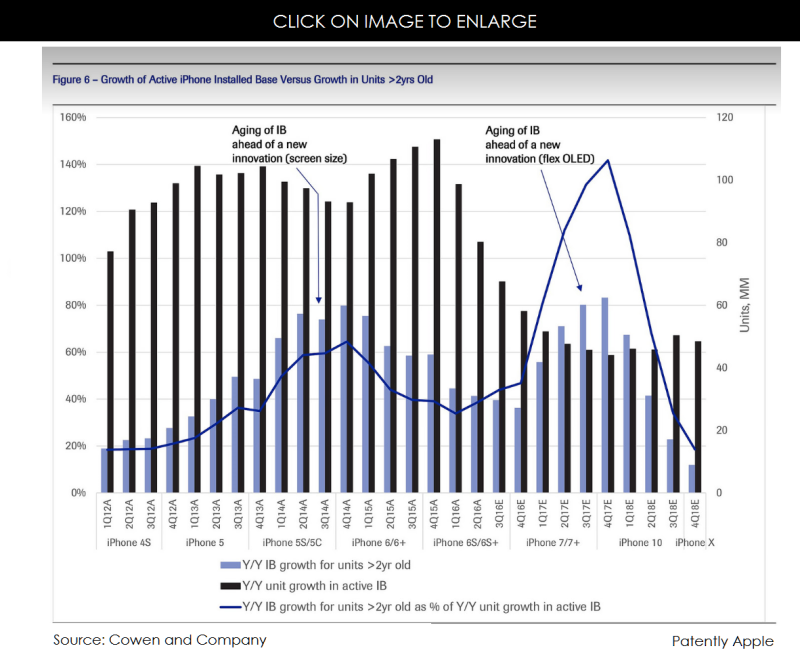 For more on this, see the full Barron's report by Tiernan Ray here.