Today, the U.S. Patent and Trademark Office published two continuation patents of Apple's regarding future iterations of Apple Pencil. The first is titled "Input Device for Touch Sensitive Displays." You could review the details of this invention in Patently Apple's detailed report that was published in January 2014. The changes to this patent are limited to the patent claims and little changed. In Apple's second continuation patent regarding Apple Pencil, Apple has made some major changes and our report will focus on those changes.

The initial Apple Pencil patent application provides us with insight as to what Apple actually cancelled in this current filing. The initial patent was first covered by Patently Apple last month in a report titled "Apple to Advance Apple Pencil to Work with Next-Gen Magic Trackpad for Macs." Below are the actual claims that Apple specifically cancelled in their current patent application published today that weren't detailed.

#1: The Patent Claims that Apple Cancelled

Patently Claim 10: The stylus defined in claim 2 wherein the elongated body has a tip at the first end and wherein the inertia sensor mode comprises a joystick mode in which tilt data is gathered by the control circuitry using the inertial sensor while the tip contacts the touch screen display.

Patent Claim 11: The stylus defined in claim 10 wherein the inertial sensor is located at the second end.

#2: The New Elements added to the Apple Pencil Invention

The new elements added to last month's patent filing are mainly covered in patent figures 5, 7 and 8 illustrated below. Apple further notes that the positions of a user's two fingers may be simultaneously gathered and used to determine how a user is rotating the Apple Pencil about axis #24 (FIG. 7). 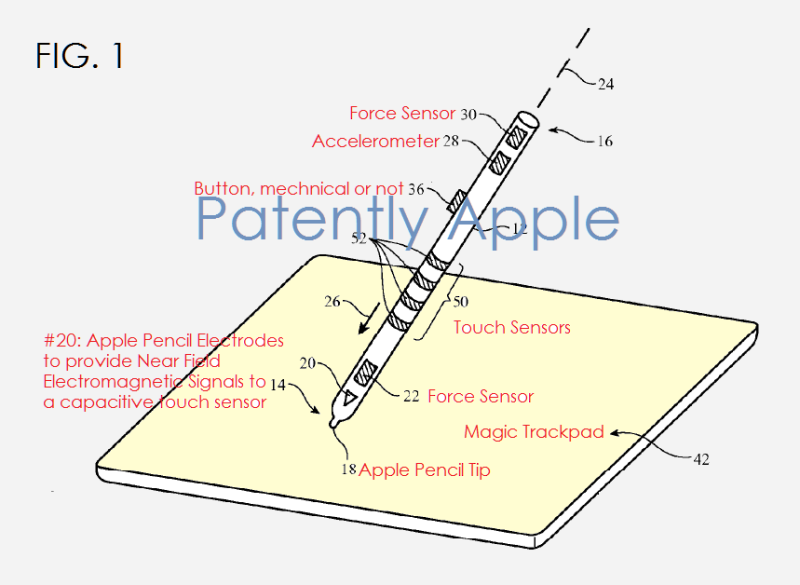 Apple's continuation patent 20160179222 notes the inventor of the patent was Ray Chang; Apple's Sr. Input Devices Electrical Engineering Manager. Considering that this is a continuation patent, the timing of this new dimension to Apple Pencil to market is unknown at this time. For more on Apple Pencil patents, see our archives.