One of the Patents behind Apple Pencil's Responsiveness & Accuracy Surfaces

In February Patently Apple posted a report titled "Apple's Smaller iPad Pro Launching Next Month Likely to Support Apple Pencil, the Best Digital Pen(cil) on the Market Today." In that report I made my views clear that the new Apple Pencil blew me away for its realtime feel with no lag. Today, the U.S. Patent and Trademark Office published a patent application from Apple that reveals one of the ways they reduced noise in their touch sensor system so as to allow the Apple Pencil to respond more accurately which gives us the sense of no lag, a term that's not used in the patent filing. From a consumer's point of view, the only thing we learn from this filing beyond accuracy is that the Apple Pencil will be able to write on future "touch pads" which could mean working with MacBooks for more accurate signatures and placing minor handwritten notes on documents. It also means that the Apple Pencil will work with a future version of the Magic Trackpad, something we learned in depth last week in a specific report titled "Apple to Advance Apple Pencil to Work with Next-Gen Magic Trackpad for Macs."

Apple's patent FIG. 1 noted below is a front perspective view of an illustrative electronic device with a touch sensitive display and an associated stylus for providing touch input; FIG. 15 is a flow chart of illustrative steps involved in processing stylus data. 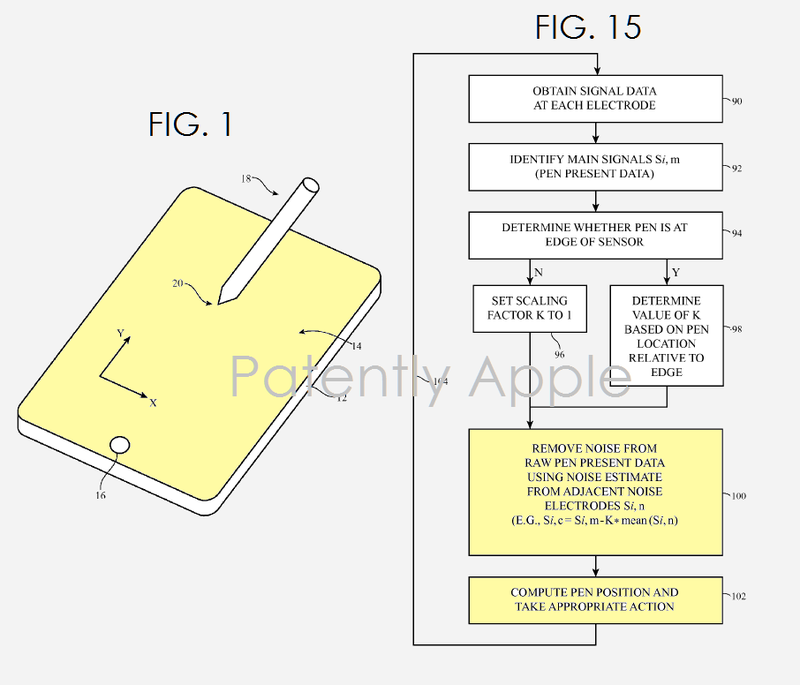 For the geeks amongst us, make sure to check out Apple's patent application 20150331508 titled "Noise Reduction for Touch Sensor System with Active Stylus" for more details. The invention was originally filed back in Q4 2014. Considering that this is a patent application, the timing of such a product to market is unknown at this time.

Lastly, note that the report's cover graphic presents Apple's patent FIG. 4 illustrating a cross-sectional side view of a portion of a touch sensor and display showing how touch sensor electrodes may interact with a stylus and may overlap signal lines such as data lines in a display.