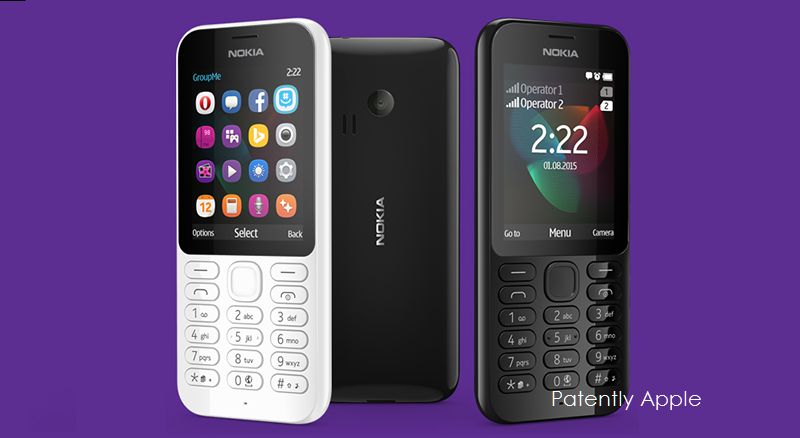 A week ago Patently Apple posted a report titled "Foxconn Subsidiary Buys Microsoft's Entry-Level Feature Phone Business and Vietnam Plant." Our report clarified that Microsoft was getting out of 'Feature Phone Business' not out of smartphones. Our cover graphic illustrates on the kinds of feature phones that they're dropping. Many in the press are incorrectly reporting today that Microsoft is getting out of the consumer smartphone market entirely which is incorrect. It sounds more like Microsoft is taking Apple's path in the market at creating high value smartphones instead of chasing the bottom of the market. In an email to employees, Terry Myerson, executive vice president of Microsoft's Windows and Devices Group, insisted that the company isn't exiting the mobile-phone business. Microsoft, which still makes three phones in its Lumia line, will continue to "develop great new devices," the Wall Street Journal reports. Myerson added that "We're scaling back, but we're not out."

The company intends to focus its mobile-phone efforts in areas where the company has "differentiation," Microsoft Chief Executive Satya Nadella said in a statement. That includes businesses that want to use Microsoft's technology to manage and secure devices on their corporate networks. Mr. Nadella also touted the company's Continuum feature, which enables a smartphone running Windows 10 to function as a surrogate PC when connected a video monitor and keyboard.

The layoffs will hit hardest in Finland, Nokia's home, where 1,350 jobs will be cut, Microsoft said. The company said the charges include about $200 million severance payments.

As we noted in our last report, Microsoft's Ballmer once laughed at Apple getting into the mobile phone space and then in a panic bought into the business via their Nokia deal which was an absolute blunder. Microsoft's CEO Satya Nadella began cleaning up the Ballmer debacle last July and today's move finally ends an ugly chapter for Microsoft.

Whether Microsoft's premium line of smartphones launching later this year under the Windows brand will be more focused against Apple's iPhone is unknown at this time. The move now opens the door for smartphone makers to adopt Windows for their low to medium market phones to differentiate themselves from Android. Whether that strategy will gain any traction in the future is an open question. Though the Windows platform would offer consumers less malware, timely updated software and access to business software which isn't Android's strong suit.