Huawei Files an 11-Count Patent Infringement lawsuit against Samsung in China and the U.S.

Huawei Technologies Co. filed a patent infringement case against Samsung Electronics Co. in the U.S. and China after the two weren't able to reach a licensing deal over the use of technology fundamental to how mobile networks operate.

In a lawsuit filed Tuesday in federal court in San Francisco, Huawei claims Samsung infringes as many as 11 patents related to the industry standard for fourth-generation mobile devices. It's seeking cash compensation. In the public portion of the complaint, Huawei doesn't seek any order to block sales of Samsung products in the U.S.

The public version of the complaint, as noted in full below, is heavily redacted to mask confidential information and the second reason behind the lawsuit. The docket reads: "Plaintiff's Complaint for (long Redaction) and Patent Infringement. 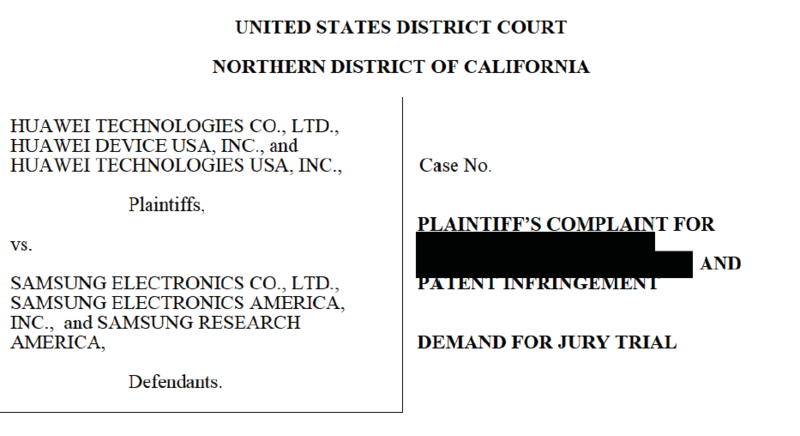 The patents cover communications networks and software to operate LTE networks established through international standard-setting organizations, Huawei said in the complaint. Huawei, one of the world's largest makers of networking gear, said it's offered to charge Samsung a fair and reasonable rate but Samsung refuses to pay.

"We have a good history of licensing and cross-licensing of our peers," said William Plummer, a Huawei spokesman. "We hope that Samsung will do the right thing."

The Patents-At-Issue in this Action

8,416,892 Method and apparatus of transmitting a random access preamble

8,483,166 Method and apparatus for accessing legacy networks through temporary ID of evolved network

8,644,239 Method and apparatus for allocating and processing sequences in communication system

8,885,587 Method, base station, and user equipment for feeding back ACK/NACK information for carrier aggregation

Below is a full copy of the Huawei lawsuit courtesy of Patently Apple for you to review.

The Korea Herald report that "Samsung Electronics on Wednesday hinted that it might file a counter-suit against Huawei, which has sued the Korean company in the U.S. and China for infringing its technology patents.

Ahn Seong-ho, head of Samsung’s intellectual property division, told reporters after a weekly meeting of Samsung CEOs in Seoul that "We will take countermeasures, including a lawsuit."