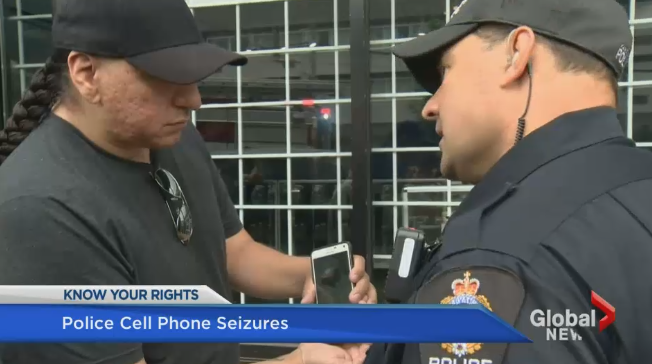 A TV report on the morning news today in Calgary, Canada,  covered  what rights people have when they witness something and capture it on their smartphone camera or tablet. Do they have to turn over your device to police? The actions of Vancouver Police Department officers caught on camera are being questioned a day after a police-involved in a shooting.

"I need to take that as evidence, sir," an officer says to a person with smartphone footage at the scene. "No, it's mine. My property," the man responds. The officer responds, "Not anymore. This is under investigation, so I need to take that video as evidence." The executive director of the BC Civil Liberties Association, Josh Paterson, says "Not so."

Paterson further added that "It's totally your right to send them that footage afterwards, to send an email to the officer attending, but you don't have to turn over your phone to the police.

He further noted that that the police can issue a warrant for a device, and are entitled to seize a witness' cellphone for evidence on scene if they reasonably believe the footage would be deleted.

"We're very concerned police may ask in a way that people don't understand that they have a right to say no, and provide evidence in another way."

Police also took an iPad from Debbie Gajdosik, though she consented to giving police her device. "We wanted to do our civic duty," she said.

But Gajdosik wanted to stay with her iPad so she could get it back that evening and that meant she ended up waiting three hours at VPD headquarters.

"After about one and a half hours, they told us we could leave, and I said, 'I'm not leaving without my device.' Getting it back proved to be a hassle," she said.

Paterson says that if police officers want footage or photos from witnesses on scene, they should get their contact information, and ask them to email it later.

"This is your own personal belonging … it has personal details of your emails, your bank accounts, texts with your loved ones, all kinds of things that police have absolutely no right to have," he said.

The report concludes that "There's no question that police should not be confiscating people's cellphones."

Yet at the end of the day, the loophole of officers being "entitled to seize a witness' cellphone for evidence on scene if they reasonably believe the footage would be deleted," is likely going to be forcefully demanded of citizens going forward by the Police and that intimidation will likely mean citizens hand over their devices against their rights. It's clear that the laws have to be beefed up on this point so that citizens, at least in Canada, will be able to confidently tell the police that they'll email a video to them but that they have the right to deny their device from being confiscated.

For the record: The report which originally ran in Vancouver, Canada, on May 25, was aired in Calgary and other parts of Canada today.