Apple Supplier Foxconn Reduces Workforce from 110,00 to 50,000 due to In-Plant Robotic Program In July 2014 Foxconn threw cold water on speculation that robots were going to be used in the manufacture of the iPhone 6. Months later Foxconn's CEO Terry Gou spoke at the opening ceremony of The World Assembly of Jin Merchants in Taiyuan. While Gou continually and faithfully promises that Apple will be the first to benefit from their future robotic assembly, it wasn't to be in 2014. Gou went on to promise that the robotics industry would play a crucial role in the world's third industrial revolution. Today we're learning from the South China Morning Post that Foxconn along with other Chinese industrialists have invested heavily in robotics.

"The Foxconn factory has reduced its employee strength from 110,000 to 50,000, thanks to the introduction of robots. It has tasted success in reduction of labour costs," said the department's head Xu Yulian. No specifics were given in respect to how many, if any, robots are being used to make Apple products. Earlier this month CNBC reported that Foxconn was hiring earlier than usual in the iPhone cycle.

An ad on Foxconn's home page read: "Foxconn Zhengzhou is hiring a large number of ordinary workers. Welcome to join Foxconn: Age between 18-40. Overall monthly salary: 3,800 renmimbi. Start working immediately." In a longer version of the ad, potential workers are encouraged to "hurry to apply," and warned that the company's jobs hotline may be busy because "so many applicants are dialing in."

The report further noted that more companies are likely to follow suit in bringing in robots to their factories. As many as 600 major companies in Kunshan China have similar plans, according to a recent government survey.

Foxconn, which has been keeping quiet about its robotics projects, opened its robot testing lab in Shenzhen, Guangdong province, to reporters from the South China Morning Post last year.

They noted that "Its Chinese factories, including those in Shenzhen, are already filled with over 50,000 fully operational industrial robots, as well as hundreds of thousands of other pieces of automated equipment, said Day Chia-Peng, general manager of Foxconn's automation technology development committee." 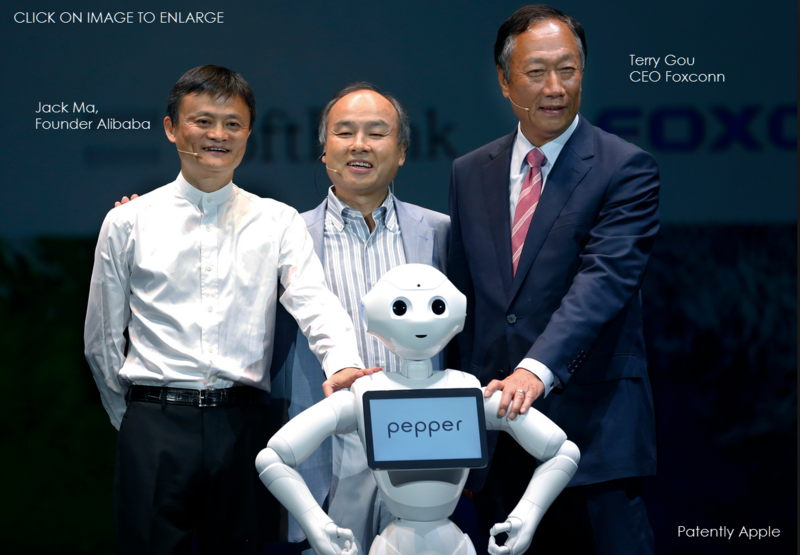 Foxconn's CEO Terry Gou at a trade event in China posing with Pepper the robot last year. Pepper was in a Verge report just yesterday. This time Pepper was getting a job at Pizza Hut. Maybe one day he'll be making cars for Apple.