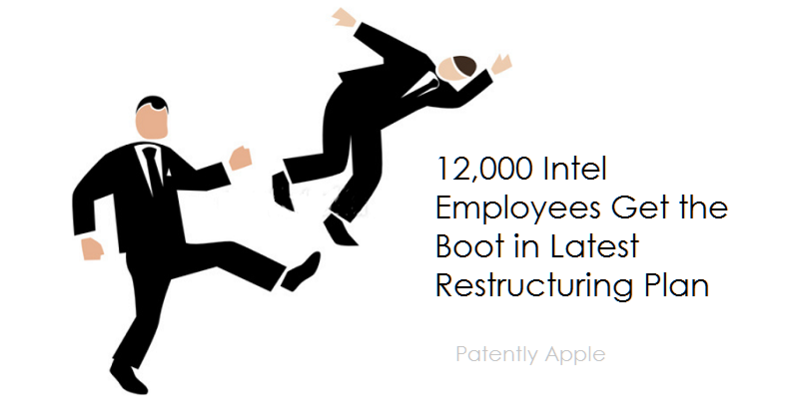 On April 4 we posted a report titled "Shake-up: Two Top Intel Executives in Charge of PC's and the Internet of Things Abruptly Leave," wherein we noted that Intel had just revealed that two of its most prominent executives had decided to leave the company, the latest sign of turmoil at the chip giant following a recent management change and continued failure to penetrate the mobile-device market. Roger Kay, who follows Intel for the research firm Endpoint Technologies Associates had said that "When things go wrong, heads have to roll. Whose head? Whoever's head is available."

Today Intel's news only got worse. While the axe may have started at the top with Kirk Skaugen and Doug Davis weeks ago, today 12,000 Intel employees were cut from the payroll along with Intel's forecast for growth dropping to low single digits. Intel expects their restructuring program will deliver $750 million in savings this year and annual run rate savings of $1.4 billion by mid-2017. The company will record a one-time charge of approximately $1.2 billion in the second quarter.

According to Intel, their restructuring initiative is designed to accelerate its evolution from a PC company to one that powers the cloud and billions of smart, connected computing devices. Intel will intensify its focus in high-growth areas where it is positioned for long-term leadership, customer value and growth, while making the company more efficient and profitable.

The data center and Internet of Things (IoT) businesses are Intel's primary growth engines, with memory and field programmable gate arrays (FPGAs) accelerating these opportunities – fueling a virtuous cycle of growth for the company. These growth businesses delivered $2.2 billion in revenue growth last year, and made up 40 percent of revenue and the majority of operating profit, which largely offset the decline in the PC market segment.

While making the company more efficient, Intel plans to increase investments in the products and technologies that that will fuel revenue growth, and drive more profitable mobile and PC businesses. Through this comprehensive initiative, the company plans to increase investments in its data center, IoT, memory and connectivity businesses, as well as growing client segments such as 2-in-1s, gaming and home gateways.

Intel's CEO Brian Krzanich emailed employees earlier today (PDF) to break the news. With last week's revelations from IDC that year-on-year PC sales had declined another 11.5%, Krzanich had no choice but to pull the restructuring trigger. To give Intel a little boost, Apple launched new MacBooks today with Intel's latest processors.