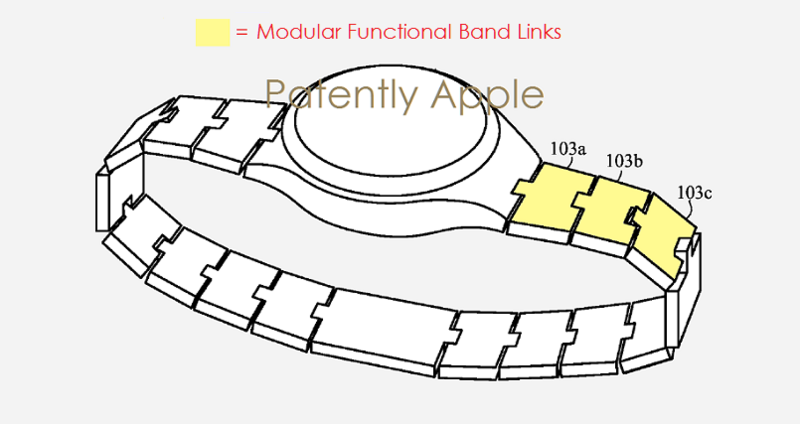 At the top of the month we posted a report titled "Apple Invents an Apple Watch Band with Individual Smart Links that Could Add New Functionality." The patents of the day pointed to the Apple Watch's hidden port being used for not only recharging the Apple Watch faster but to also to support 'Smart Links' in a future band that could contain added value and functionality. Apple noted that users would be able to add a camera, cellular antenna, photovoltaic cells, thermometers and more. To date only one company had taken advantage of the Apple Watch's hidden port called 'Reserve Strap.' They were supposed to be shipping the band in 'early 2016.' For anyone who had placed an advanced order, you may be disappointed to learn that Apple has killed the Apple Watch accessory port for third party developers.

Reserve Strap announced late on Monday that Apple had made the decision to remove all functionality from Apple Watch's accessory port thereby blocking Reserve Strap's ability to charge the Apple Watch.

According to Reserve Strap's letter to supporters they noted the following:

"We wanted to give you a rundown of the latest developments in Reserve Strap's journey and enlist your help.

In recent WatchOS releases, Apple made the decision to remove all functionality from Apple Watch's accessory port thereby blocking Reserve Strap's ability to charge the Apple Watch. This was a deviation from how the port functioned in all previous WatchOS releases and appears to have been a deliberate effort to block development of third party smartbands.

This action was surprising given that prior to this WatchOS update, Apple had been an advocate of our product–going as far as inviting us to Cupertino to show them early prototypes as well as placing pre-orders for many Reserve Straps. Additionally, Apple continues to run old versions of WatchOS on their in-store kiosks in order to utilize the functionality of the accessory port.

We are not asking Apple to officially or unofficially support the Reserve Strap, we are simply asking them to remove the intentional blocking of our product and let (you) the users decide.

Thousands of Apple Watch wearers have purchased the Reserve Strap over the last several months because they desired the freedom to use their Watches for more than a day without plugging in their Apple Watch.

Every week we get emails from professional athletes, first responders, world travelers, and health enthusiasts about how the Reserve Strap could enhance their lifestyle–confirming our belief that the Reserve Strap is an empowering product for many Apple Watch wearers.

For our customers who are still running WatchOS 2.0 or earlier, we can still ship Reserve Strap in the coming weeks, but they will not be able to update their Watches without losing the charging feature that is only present in the early versions of WatchOS.

For other customers, we are continuing to explore additional charging protocol solutions and believe an official MFi program supporting Apple Watch smartband accessories may be forthcoming.

We would greatly appreciate if you would contact Apple in support of Reserve Strap. You can either send an email to the Apple Hardware Evangelism team here or submit feedback on Apple's website."

It should be noted that 'Reserve Strap' didn't provide any news as to how or when they would refund those who placed advanced orders.

Whether Apple will revive the accessory port at some point in the future or limit its use to their own accessory line involving a future band with 'Smart Links' as noted at the top of our report is unknown at this time.