Today the ACLU published an interesting report for those who have followed the FBI v. Apple case. They noted that the government had insisted that its effort to force Apple to help break into an iPhone as part of the investigation into the 2015 San Bernardino shootings was just about that one case. Even though the FBI no longer needs Apple's help in that case, the FBI's request was part of a sustained government effort to exercise novel law enforcement power.

Interactive Map: Instances of the All Writs Act being used in the U.S.

The ACLU notes in their report that at the heart of the legal battle is the All Writs Act, originally passed in 1789, which gives courts the authority to issue orders necessary to enforce other lawful orders or decisions. We've found that the government has been using the law to force tech companies to help unlock their customers' devices in dozens of cases since 2008. 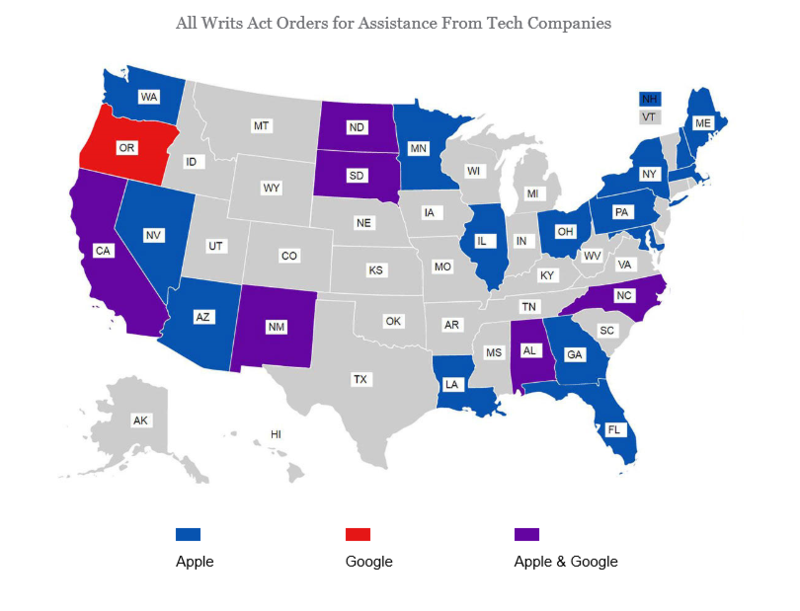 The map noted above provides you with a quick reference guide to the tech companies having been compelled to assist the government using the All Writs Act. In order to see the breakdown and actual court docket numbers for each case click here.

The report further noted that "After the Justice Department revealed in a case in Brooklyn that it had already secured approximately 70 such orders, the ACLU and the ACLU of Massachusetts went digging for them. We uncovered 63 confirmed cases in which the government applied for an order under the All Writs Act to compel Apple or Google to provide assistance in accessing data stored on a mobile device. To the extent we know about the underlying facts, these cases predominantly arise out of investigations into drug crimes." For more on this ACLU report, click here.

To make it easier to calculate, Patently Apple gathered the information together from the ALCU stats and created the graphic below showing the U.S. States that have used the All Writs Act against Apple to gain their assistance and how many cases per State.