Home Archives Contact Us Subscribe Twitter MeWe Facebook Patently Mobile
Eddy Cue Plays the Government Fear Card talking about the possible Abuse of an iPhone Search against Latino Immigrants
Why Can't Encryption be an Option on the iPhone? 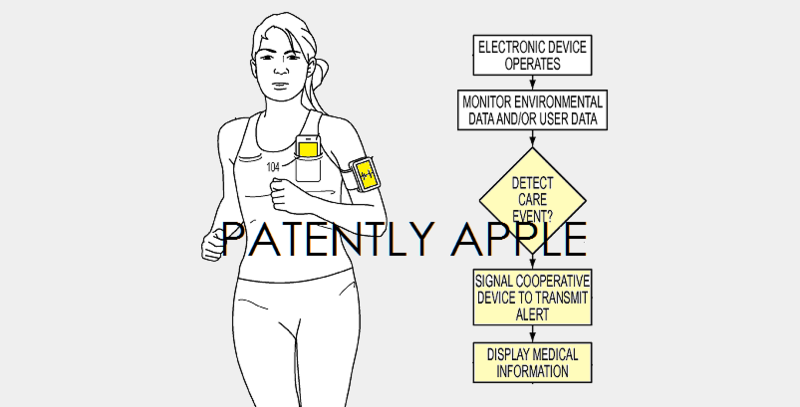 Today, the U.S. Patent and Trademark Office published a patent application from Apple that generally relates to 'care events' and more specifically to detection of care events and transmission of alerts to iOS devices regarding detected care events. Apple's new 'care events' system could cover a user in a car accident, a user having a heart attack during a workout, a dementia patient drifting too far from a care center or home, a skier caught in an avalanche and beyond. If the device, such an iPhone, detects that a user is in trouble and is currently unable to use their device to call for help, the 'care event' feature of the iPhone would kick into gear automatically and dial out for assistance to emergency services with vital information about the user's health and contact information. While an Apple Watch could be a part of the system, the backbone of the care event system is an iPhone for its communications capabilities and added power.

According to Apple, care events may be any event that may occur for which a user may need care. For example, care events may include a car crash, a bike accident, a medical emergency such as a heart attack or an aneurysm, separation of a child from the child's caregiver, a dementia patient becoming lost, an avalanche, a fall, a mugging, a fire, and/or any other event for which a user may require medical, police, family, fire rescue, and/or other kind of assistance.

In order for the user to receive care for such a care event, one or more individuals or entities who provide such care (such as friends, family, firefighters, ambulances, hospitals, police, and so on) may need to be alerted to the fact that the care event has occurred.

Often, the user may contact such individuals or entities upon the occurrence of the event. For example, a user who has been in a car crash may telephone emergency services for an ambulance. However, in many cases the user may be incapacitated and/or otherwise unable to initiate communications regarding the care event.

This is why the design of the new 'care event' system requires an iPhone that is able to communicate with emergency services.

Apple's invention covers systems, methods, and apparatuses for providing alerts regarding a care event. An occurrence of one or more "care events" may be detected by an electronic device monitoring environmental data and/or user data from one or more sensors.

In plain English, the sensors monitoring heart rate during a workout on an Apple Watch would be able to transmit an alert to a user's iPhone that could then send out an alert to emergency services with a call, text message etc.

In various implementations, the alerts may be transmitted to electronic devices listed in a care list, which may be user defined. Such a care list may be a data record indicating parties whom should be alerted in case of an occurrence and how they should be alerted.

In some cases, a care list may have multiple levels where an alert for an occurrence is transmitted to a first set of list members and then to a second set of list members if an escalation condition occurs. Further, such a care list may also include conditions specifying different procedures to be followed in transmitting alerts based on factors such as the particular occurrence detected, a context of the electronic device, and so on. 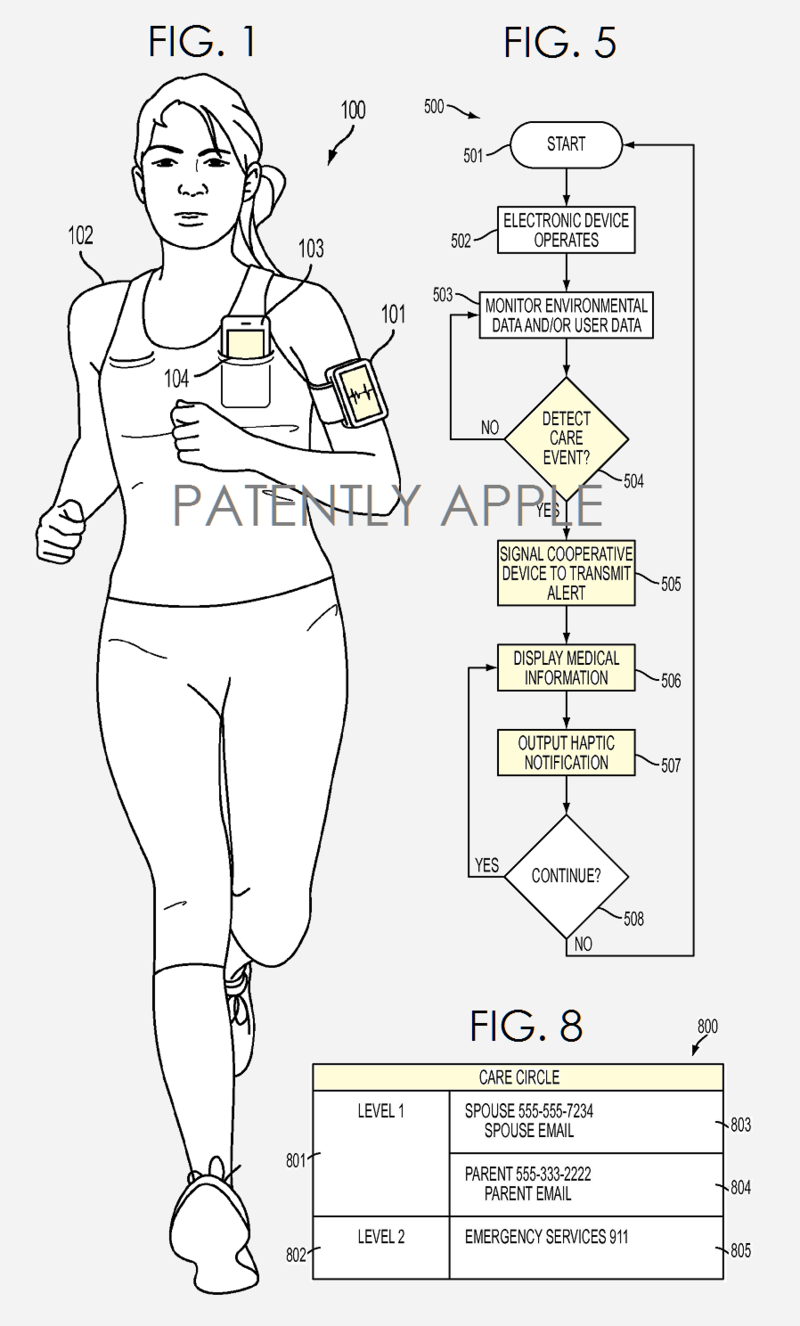 Apple's patent FIG. 8 noted above is a table illustrating an example care list. As illustrated, the table includes a first level #801 including a first entry #803 for a user's spouse and a second entry #804 for the user's parent and a second level #802 including an entry 805 for emergency services.

In some implementations, information associated with the occurrence may be included in the transmitted alert. In various cases, the electronic device may present one or more prompts upon detection of an occurrence and alerts may be transmitted if a user does not enter input indicating not to transmit alerts within a timeout period.

In various cases, the electronic device may present one or more prompts (audio, visual, and so on) upon detection of an occurrence and alerts may be transmitted if a user does not enter input (whether by touch input, button or key press, voice response, motion response such as a head shake captured by camera) indicating not to transmit alerts within a timeout period. In such cases, information such as a failure to respond to such a prompt, an indication of an affirmative response to such a prompt, an affirmative response, and so on may also be included in the transmitted alert.

In various implementations, the electronic device may present one or more notifications regarding the detection of the occurrence. For example, the electronic device may display and/or otherwise medical information for a user when an occurrence is detected and may provide one or more haptic outputs to indicate that the medical information is being provided.

In some cases, such alerts may be broadcasted, functioning as an "Amber Alert" to notify electronic devices proximate to the child's phone that the child has become separated from the parent.

In still another example, a group hikers such as scouts may all wear electronic devices that all monitor a connection to each other. If one of the devices is no longer connected to the other devices, the respective device may begin transmitting alerts indicating where the device is located and which other devices it is still and is not still connected to. In this way, care providers may know which and how many hikers may be lost. If connection is reestablished, transmission of alerts may cease and/or one or more alerts may be transmitted to indicate that a care event did not occur after all.