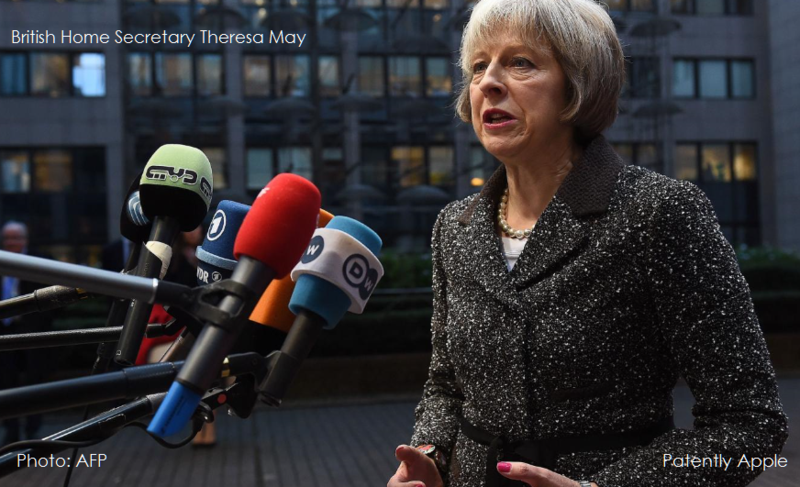 On March 16 Patently Apple posted a report tiled "Proposed UK Law Aims to Force Tech Companies to Build Back Door-Like Security Features into Software." The report noted that "An executive at one leading tech company told the Sunday Times: 'People shouldn't be in any doubt, the [UK] government is pushing for some of the most invasive surveillance legislation out there today." Late this week the UK's Independent published a report stating that Apple, Facebook, Google and others are asking the UK Government to change the Investigatory Powers Bill.

Apple and the rest of the world's largest tech companies have launched a sweeping attack on the Government's spying bill, arguing that it still has huge flaws that must be corrected before it passes into law.

Specifically, the companies sending evidence to the UK government criticized the bill for the powers it enables. More specifically, the ways that it keeps companies from disclosing or appealing orders that are made against them, and the mechanisms for checking that the law is not being abused.

It would appear that the UK Government wants to be able to legally stave off legal challenges from the likes of Apple as they witnessed with the FBI case over unlocking the San Bernardino terrorist's iPhone 5c. Apple's deep pockets could keep legal battles tied up in the courts for years and kill-off obtaining important information from a phone in a reasonable time frame to thwart a terrorist attack or other heinous crime.

For more on this, read the full Independent report here. For additional background to this subject and to understand this isn't the first time the U.S. tech group has sent a challenge to the UK government, see the Wall Street Journal's January report titled "U.S. Tech Firms Criticize U.K. Spying Legislation," here.

In that report they noted that Facebook, Google, Microsoft, Twitter, Yahoo and others stated in a joint submission that "The actions the U.K. government takes here could have far-reaching implications—for our customers, for your own citizens, and for the future of the global technology industry."