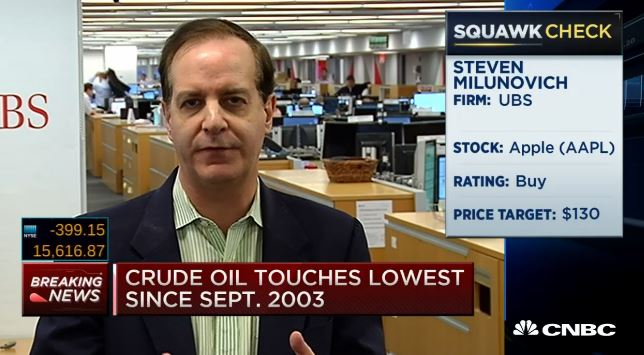 Considering that Apple's financial conference call is only hours away from commencing, it's either gutsy or reckless of USB analyst Steve Milunovich to be taking another stab at Apple at this late point in time. According to a new CNBC report "A new Apple survey released by UBS on Wednesday confirmed some of the shipment concerns surrounding the iPhone. The results were even worse than the bank initially expected due to slower upgrade demand in developed countries, UBS analyst Steven Milunovich said Wednesday. "We're finding that there is a bit of a shift toward older phones. Perhaps the fact that the features of the 6S aren't encouraging enough, people are taking the $100 off and buying more of the 6."

The survey found that search traffic for the iPhone declined about 20 percent in the United States from September to December, according to Milunovich in his research note. It also showed that 67 percent of December U.S. iPhone sales were the newest 6S and 6S Plus models, down from the 75 percent new model mix last year.

Still, Milunovich maintained his "buy" rating with a price target of $130 for Apple. Though this quarter will most likely not help the stock, the primary issue affecting the company is more about the demand for upgrades rather than market share loss or substantial margin pressure, he said. Milunovich added that "There also seems to be little investor faith in current or potential new products, which we think might prove too bearish.