Future iDevices will be able to Automate Maintenance

Today, the U.S. Patent and Trademark Office published a patent application from Apple that reveals how a future iDevice like an iPhone will be able to perform maintenance or repair services on its own when the device is detected to not be in use or is in an environment where the user wouldn't notice the maintenance in progress.

Apple notes that due to the increasing amount of services and applications demanded by users of portable electronic devices, the types and sophistication of the sensing elements contained therein is increasing. Normal use of mobile devices subject them to shock and environmental conditions risking damage to various components. Such damage could result in poor or no performance of the portable electronic device. Exposure to environmental elements may take its toll on portable devices over time which necessitates increased maintenance, recalibration and repair services to the portable electronic devices. This increase in service requirements could become an annoyance to a user and result in significant user dissatisfaction. These maintenance and repair services may be time consuming to perform and result in unavailability of certain services and user down time which may be unacceptable to many users who rely on these devices during, and as part of, their daily routines and activities.

If a maintenance situation is identified, the maintenance or other repair may be performed without interrupting the user's normal routine. That is, the maintenance services may be performed if the device determines that it is not being used such as when the user is sleeping or is engaged in other activities which would make the user unaware that such maintenance or remedial operations are being performed. In another embodiment, the device is determined to be in an environment (noisy, low light, and so on) which would make it optimal for performing certain services without disruption to, or detection by, a user. 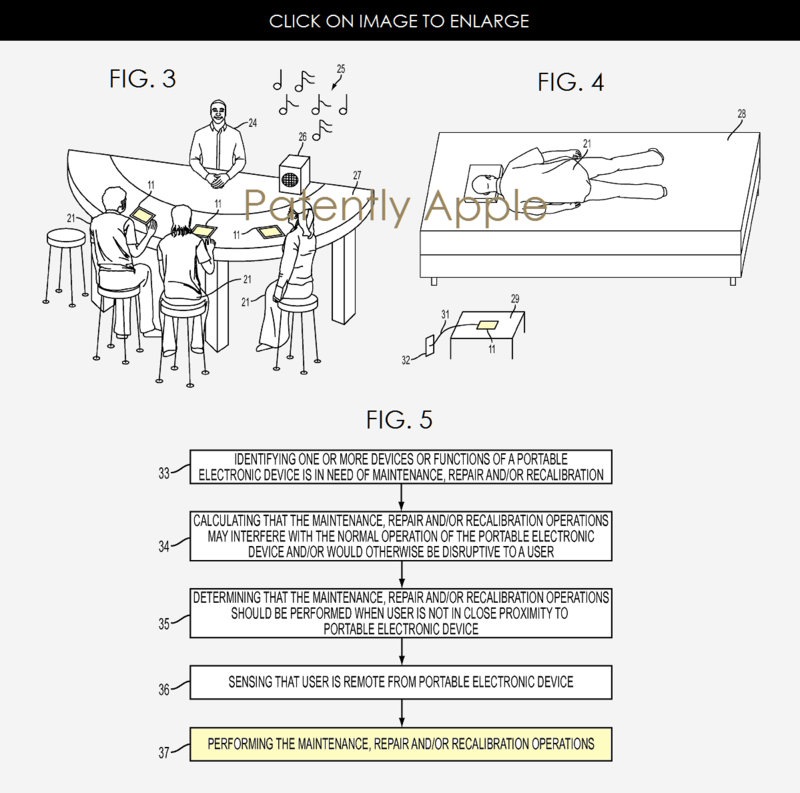 In the first scenario, Apple notes that in patent FIG. 3 one or more of sensors such as a microphone may determine that smartphone is in a noisy environment such as a crowded street or a noisy entertainment venue like a club. In this embodiment, a disc jockey is playing music from a loudspeaker in a sufficient volume such that users may not be able to hear any noise from smartphones. In this noisy environment, for example, a moisture clearing operation may be performed so that any noise made by the operation will not be heard by a user due the level of background noise from the sensed noisy environment. The noisy environment is determined by sensors and a controller by determining that the detected noise level exceeds a predetermined threshold. In this embodiment, various sensors including a microphone, in conjunction with a controller have determined that the level of background noise is sufficient, and has been sufficient for a predetermined time and likely will remain sufficient, such that it is likely that various maintenance or repair activities that would otherwise be audibly apparent to users could be performed on the smartphone without the user's detection.

In another embodiment, a high frequency vibration may also be used to clear water from the speaker such that the user will not feel the vibration. In this embodiment, sensors including accelerometer sensors and proximity sensors, detect that certain smartphones are lying on a table or other inanimate object and are not likely in contact with the hands of users.

Another repair operation that must be periodically performed is to the display to repair LED (Light Emitting Diode) burn in or bright or dark pixels on the screen or missing or artifact lines in a video display. In order to perform these operations, the screen must be cycled through various light colors and/or various patterns must be cycled across screen to repair the LED point source. This process may take up to several hours to complete. If this operation is done while the user was trying to view the screen 13, it would cause significant disruption. Apple notes that specific sensors such as a proximity sensor, a light sensor and an optical sensor could be used to detect when the user has left a room or when a suitable low light environment (i.e. dark room, device in a pocket, purse or other closed container) is sensed to perform these operations so as not to be disruptive to the user.

Another scenario is seen in patent FIG. 4 illustrating when a user is sleeping. This is an excellent time to perform certain maintenance operations.