Earlier this month, the U.S. Patent & Trademark Office published a patent application from Samsung revealing their work on a new 'smart ring' accessory device that could be used to control certain functionality on future smartphones, tablets or any kind of smart TV. Samsung's smart ring could also be used in conjunction with a future home automation system. At the moment, Microsoft, Google and Apple have their engineers tinkering with a future smart ring and so the race is on as to who will be first to deliver a smart ring that could capture the imagination of consumers with cool features.

In Samsung's patent FIG. 1 noted below we're able to see a smart ring system (ring #100 and a smartphone #110); FIGS. 4A, B & C illustrates a smart ring with embedded sensors. 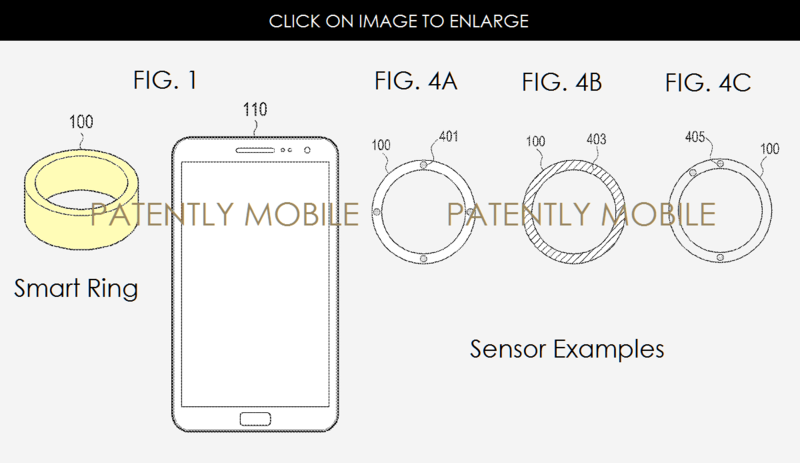 Technically speaking, Samsung has ring technology baked into their new smartwatch to control content of all kinds including TV. This technology was first covered in a patent report that Patently Mobile posted back in June 2014. Their watch ring could act as the foundation of a wearable smart ring. For more on this, see Patently Mobile's full report.

In the end, Samsung beating Apple to market may not mean that much. Samsung raced to beat Apple to market with a smartwatch and even though they had almost a two year market lead, their Gear device got run over by Apple Watch in just the first month being on the market.