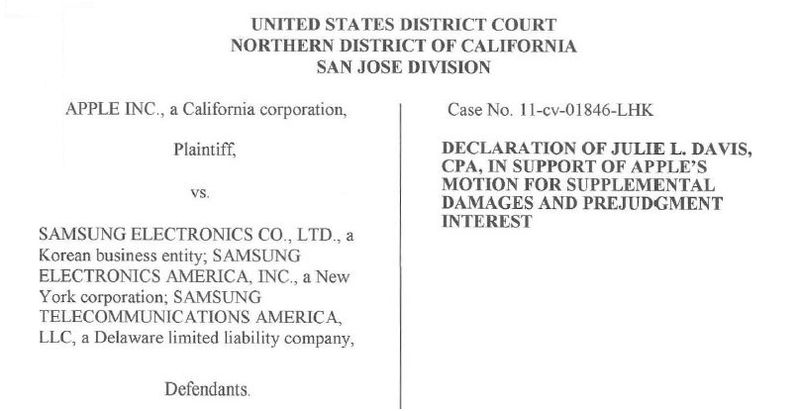 Apple is on record having retained Julie L. Davis, CPA and Principal at Davis & Hosfield Consulting LLC in Chicago as a damages expert in the above-captioned matter. The company has been providing audit and financial consulting services to attorneys and corporate clients for over thirty-seven years. They submitted a declaration with the court in support of Apple's motion for supplemental damages and prejudgment interest for 178,659,870. The full argument is presented to you in the document below.

In Engadget's report they covered a secondary document presenting the actual breakdown of Apple's claim as noted below. Since each of the offending smartphones remained on sale after the verdict was rendered in August 2012, the court decided that each type of phone would get its own per-unit amount in damages. Throw in about a million dollars in interest and you've got Apple's beef in a nutshell."

Earlier this month we posted a report titled "Samsung to Send Apple a Check for $548 Million for Infringing Apple Patents … with a Catch of Course." The catch was this:

"Samsung continues to reserve all rights to obtain reimbursement from Apple and/or payment by Apple of all amounts required to be paid as taxes. [...] Samsung further reserves all rights to reclaim or obtain reimbursement of any judgment amounts paid by Samsung to any entity in the event the partial judgment is reversed, modified, vacated or set aside on appeal or otherwise, including as a result of any proceedings before the USPTO addressing the patents at issue or as a result of any petition for writ of certiorari filed with the Supreme Court."

Samsung's half-hearted sign to make peace with Apple has now been met by Apple's request for an additional US$179 million in damages for their continued patent infringements with interest charges.

Earlier this month we reported that HSBC analysts had predicted that TSMC would gain all of Apple's future A10 chip business. While that may be hopeful thinking, it would be nice to think that Apple will continue to punish Samsung where it really hurts their bottom line – by not giving them future business wherever possible.