Today, the U.S. Patent and Trademark Office published a patent application from Apple titled "Time Multiplexed Touch Detection and Power Charging. Apple's invention generally relates to touch sensitive devices, and in particular, to a touch scan mode during device charging. According to Apple, a power adapter or an inductive charger can charge a battery of a device, but can also introduce or add noise during the process of charging the battery. Touch pixels of a touch sensitive device can be stimulated by noise from the charger, and can adversely affect one or more components, such as the touch sensor panel. To prevent adverse effects to the touch sensor panel, while the device is charging, the touch controller can time multiplex touch scan periods and inductive charging periods and can discard touch scans or touch images affected by the noise. Buried in Apple's patent is another reference towards providing a new "fuel cell system." 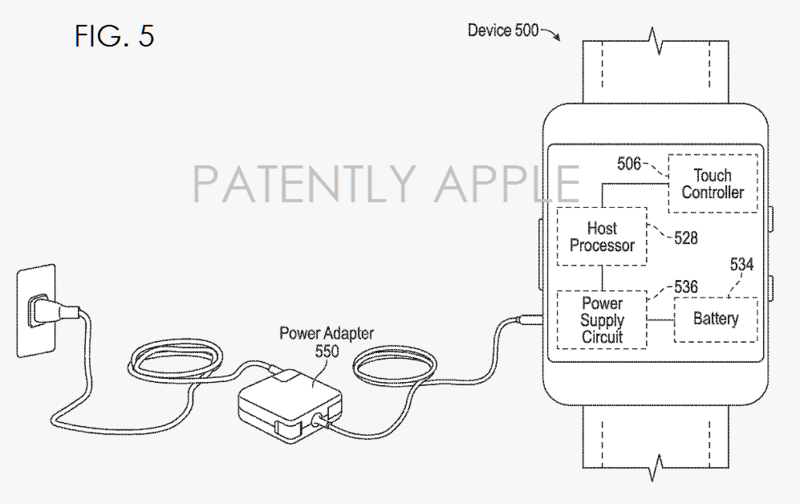 Apple's patent FIG. 5 illustrates an exemplary configuration of a device, such as an Apple Watch, coupled to a charger. Apple notes that "the term 'battery' is used generically here to refer to a rechargeable power system such as a fuel cell system that can be replenished by being coupled to an external power source or charger such as power adapter 550."

The U.S. Patent and Trademark Office published Thursday's patent applications today because they experienced a massive power outage last week prior to the holiday closure.